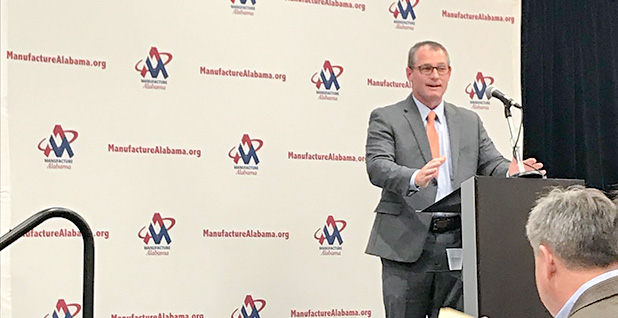 Trey Glenn, EPA’s Southeastern regional administrator, has been indicted by an Alabama grand jury over allegations of violating the state’s ethics law, according to the agency that oversees compliance with that statute.

The charges include conspiracy to break the ethics law with Scott Phillips, a onetime business associate of Glenn who sat on the board of Alabama’s environmental agency before stepping down last year, the Alabama Ethics Commission said in a news release today. Other alleged violations include soliciting a thing of value "from a principal, lobbyist or subordinate, and receiving money in addition to that received in one’s official capacity," the release said, although it is unclear whether those charges apply to both Phillips and Glenn.

Glenn has served as administrator for Atlanta-based Region 4 since August 2017. As a principal with a Birmingham consulting firm several years ago, however, he was closely involved with a top lobbyist and an attorney for Drummond Co., an Alabama-based coal company that was fighting a Superfund cleanup proposal that could saddle it with millions of dollars in cleanup costs.

A federal jury in July convicted the lobbyist, David Roberson, and the attorney, Joel Gilbert, on multiple charges related to a scheme to bribe a state lawmaker to oppose the proposal. Although federal prosecutors did not charge Glenn, he spent two days on the witness stand during the trial (Greenwire, July 2).

His firm, Southeast Engineering and Consulting LLP, reaped hundreds of thousands of dollars from its work for Drummond, trial exhibits showed. It was not immediately clear whether the state charges were related to that work. Phillips co-owned the consulting firm with Glenn, Al.com reported.

Glenn previously served as director of the Alabama Department of Environmental Management from 2005 to 2009. In 2007, the Alabama Ethics Commission found probable cause to believe he might have violated the state law to get the director’s post and referred the matter to a district attorney’s office for further investigation.

Glenn was also alleged to have taken trips on the dime of a state contractor’s public relations firm. He denied wrongdoing, and he was not charged after the district attorney eventually concluded there were no "probable violations" of the state ethics law.