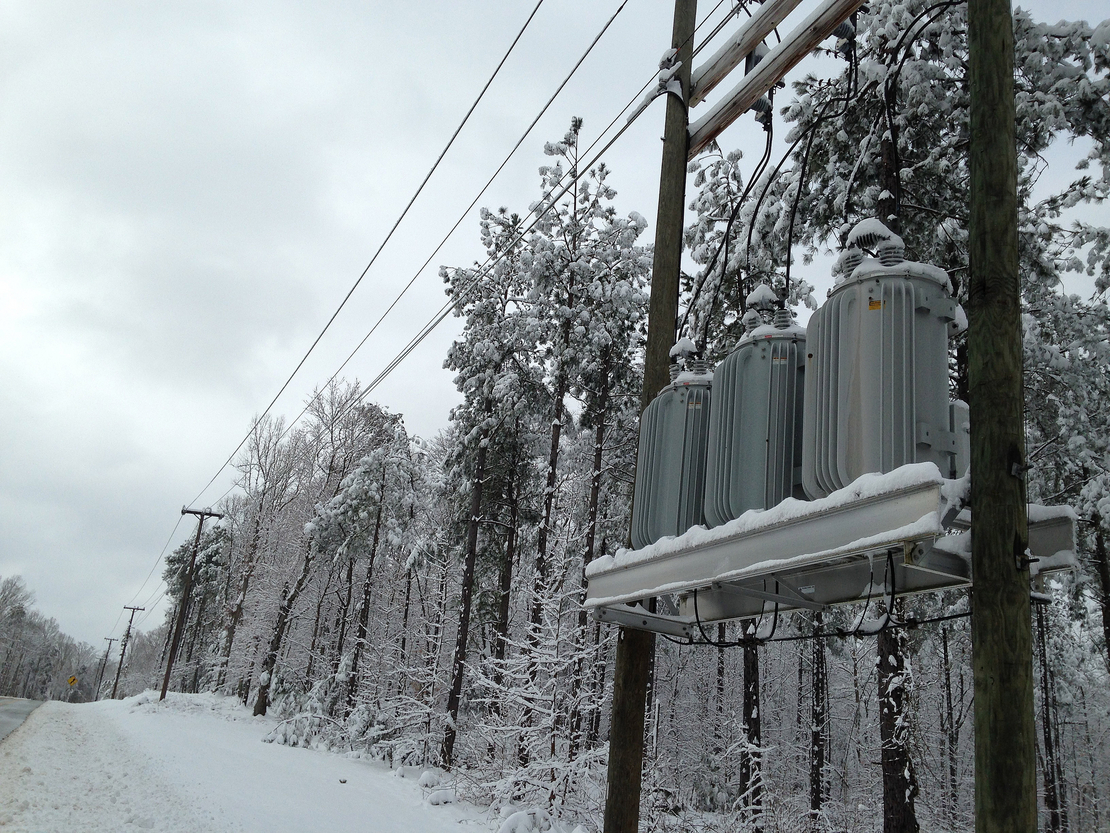 Texas, the Midwest and New England are at risk of having insufficient electric power supplies in a “worst-case” extreme winter storm, the nation’s grid monitor warned on Thursday.

The North American Electric Reliability Corp., in its annual winter risk assessment, said the three regions face an unacceptable level of risk that an extended blizzard like Winter Storm Uri — which paralyzed Texas in February 2021— would lead to emergency power shortages.

NERC found that almost all areas are well-prepared for normal winter conditions. It also noted actions taken to strengthen parts of the nation’s high voltage systems and gas fuel supplies in the nearly two years since Uri swept through the central United States.

But the lessons from Texas storm and the pace of change from fossil fuel generation to carbon-free renewable power compelled a deeper look at what could go wrong, NERC officials said.

“In areas where we have extreme weather — cold, widespread, prolonged winter weather — those are the areas that are getting seriously challenged,” said John Moura, director of reliability assessment and performance analysis for NERC, the congressionally authorized grid-standards organization.

“Those areas sound like they’re a bit rolling the dice, and that is really not the posture we’d really like to set for reliability for the [interstate] bulk power system, the crown jewels of our nation,” Moura added in a media briefing Thursday.

As the U.S. grid transitions to cleaner energy, the risk of outages increases, Moura said, while the policies and investments that could blunt that risk struggle to keep up.

In NERC’s analysis, peak winter demands for power are rising in some areas thanks to regional population shifts and the spread of internet traffic and data farms. Increased electric vehicle sales and electric heating installations add to the growth.

But the amount of around-the-clock generation with the most secure fuel supplies — coal and nuclear plants — is shrinking as generation from carbon-free, but weather-dependent, wind and solar power increases, NERC said.

Policies that could ease supply pressures, such as more high voltage transmission links to renewable power sites, are stymied by Republican opposition to Democrats’ climate initiatives in Congress and conflicting state interests, grid experts say. And the cost of all energy projects is rising.

NERC prepares the winter threat assessment every year in collaboration with regional grid operators. But this year’s report went beyond the usual analysis — which looks at readiness for normal winter weather — and considered the most hazardous weather and supply scenarios.

The most alarming — and potentially controversial — part of NERC’s analysis was its calculation of generation reserves in U.S. and Canadian grid regions in the case of an extreme storm that causes electricity demand for heating to spike while forcing unprepared power plants and gas supplies offline.

In that scenario, available generation in the Electric Reliability Council of Texas (ERCOT), covering most of the state, would be 27 percent less than the expected peak demand, NERC said. The Midcontinent Independent System Operator (MISO), manager of the grid in the central United States, could face a 7 percent supply shortfall in that situation. Emergency power reserves in New England and parts of the Southeast and lower Mississippi region could be down to single digits.

An ERCOT spokesperson said Thursday that ERCOT had no comment because the final NERC report had not been posted, although NERC officials said they had shared information with the grid operators as the report took shape.

The severity of the Texas grid crisis in Winter Storm Uri stemmed the failure of power plants and natural gas system operators to winterize equipment adequately — despite a similar winter outage ten years before, according to an official investigation by NERC and the Federal Energy Regulatory Commission. That investigation found that regulators had not required the additional precautions.

The Public Utility Commission of Texas (PUC), which regulates ERCOT, ordered weatherization improvement after the 2021 outage. ERCOT has since conducted 324 weather preparedness inspections to determine whether operators made those improvements. ERCOT declined on Thursday to say what the outcome of these inspection had been.

In an appearance before a Texas state Senate committee on Thursday, ERCOT CEO Pablo Vegas said that “in the most extreme cases,” there is a risk of a gap between supply and demand. Vegas emphasized the work ERCOT has done to “de-risk” the system, especially by improving weatherization of natural gas infrastructure and bringing online some incremental resources that can start up quickly.

PUC Chair Peter Lake pushed back on what he said were “inaccuracies” and an “overreach of expectations” in the NERC report.

The report estimated that ERCOT would have demand exceeding 80 gigawatts, even higher than the record-setting demand that Texas hit multiple times this summer. That assumption, Lake said, “seems beyond reasonable.”

However, a 2022 study from Texas A&M researchers examining the 2021 Winter Storm Uri found that demand during the deadly storm likely exceeded ERCOT’s own forecasts, with hourly peak demand estimated at 82 GW — in line with NERC’s forecast.

MISO has enhanced readiness for extreme cold weather in the past year, and a survey of generators “showed improvement” in preparations, according to spokesperson Brandon Morris.

But, Morris added, “one of the key challenges heading into winter is the potential for high risk, low probability events — such as extreme cold weather, intense winter storms and/or fuel supply issues — that could impact the availability and capability of generators to operate, creating challenges for MISO and local utilities to serve load.”

The NERC report became immediate material in the debate over climate policy.

Michelle Bloodworth, CEO of coal industry trade group America’s Power, zeroed in on NERC’s comments about the impact of coal plant closures on grid vulnerabilities. Almost 27,000 megawatts of coal-fired generation is set to retire by the end of 2023, she said, with half the country’s coal fleet expected to close by 2030.

“NERC, grid operators, utility commissioners and FERC must take steps to stop these closures until there is certainty that coal plants will be replaced with electricity sources that are dependable,” she added.

Jim Matheson, CEO of the National Rural Electric Cooperative Association, said NERC’s report was evidence of the risks of “continuing a haphazard energy transition” that “prioritizes speed over practicality.”

“As the demand for electricity risks outpacing the available supply during peak winter conditions, consumers face an inconceivable but real threat of rolling blackouts,” he said. “It doesn’t have to be this way. But absent a shift in state and federal energy policy, this is a reality we will face for years to come.”

But the primary cause of Texas’s 2021 outage — and earlier coal weather emergencies in the Northeast — was the failure of coal and natural gas generation, said Christy Walsh, director of federal energy markets for the Sustainable FERC Project of the Natural Resources Defense Council.

The problem isn’t that coal plants are retiring, Walsh said — it’s that renewable energy projects aren’t getting clearance to connect to the grid. An enormous amount of solar, wind and energy storage projects are waiting to be built, she said, stymied by the backlog.

“If we had that in place, we would be able to handle cold weather,” Walsh said in an interview.

The evidence of worsening extreme weather tied to climate change is hardly an argument to relax the pace of decarbonization, she added.

NRDC and other clean energy advocates have called on FERC to require transmission operators to plan expansion of high-voltage power line networks to build the grid’s capacity to overcome extreme weather threats.

Last year’s bipartisan infrastructure act and this year’s Inflation Reduction Act also include record levels of funding — in the form of grants and tax incentives — for clean energy development.

On Thursday, the Department of Energy announced that it will begin accepting applications for $10.5 billion in competitive grants to strengthen and modernize high-voltage power line networks and for another $2.5 billion in grants for transmission investment.

“An estimated 70 percent of the nation’s transmission lines are over 25 years old, and this aging infrastructure makes American communities, critical infrastructure, and economic interests vulnerable,” the administration said. New lines will deliver more wind and solar power and allow more power to flow to regions hit hard by storms, heat waves and other extreme weather, it added.

Although the infrastructure funding sets a record for federal support for transmission, it is a small amount of the total investment required to transform the U.S. power system to clean energy, experts say.