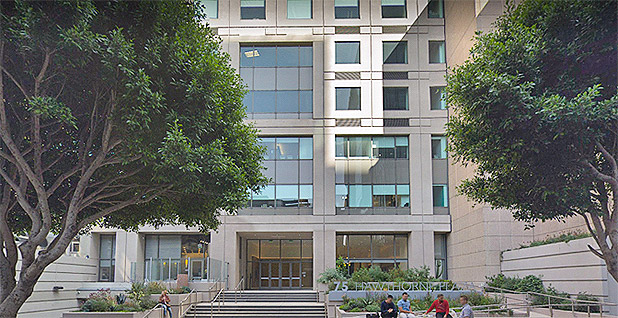 Employees in EPA’s San Francisco-based Region 9 were offered buyout and "early out" options over the summer, according to documents obtained by E&E News. Staff working in Las Vegas offices that were slated to close earlier this year were also made offers to leave, according to an EPA spokeswoman.

Wendi Shafir, one of the eight Region 9 employees who took buyouts, told E&E News in an interview that two EPA programs she worked on — one for preventing pollution, the other managing sustainable materials — had been zeroed out in President Trump’s budget request.

The cuts came during a change of leadership at EPA as former Administrator Scott Pruitt — known to boast of the agency’s shrinking workforce — stepped down in July after battling a multitude of ethics allegations. Acting Administrator Andrew Wheeler is now at the helm and is leading a reorganization effort that has left some employees worried about their future at the agency.

But unlike a more widespread round of buyouts EPA offered last year — which targeted every program and regional office — this year’s buyouts gained little notice outside the agency. Targeted staffers could take an incentive payment of up to $25,000 to leave the agency or choose early retirement instead if they were eligible.

A memo from Mike Stoker, EPA’s Region 9 administrator, said the branch wanted to take advantage of buyouts "to help ensure that our workforce possesses the mix of skills most appropriate for carrying out our mission."

A PowerPoint presentation explaining the buyouts indicated they would help create "opportunities to reduce and restructure positions," facilitating the region’s efforts to improve "staff-to-supervisory ratios" in its Environmental Management Division.

‘Math was in my favor’

Charles O’Quinn, a supervisory information technology specialist who served more than 20 years at EPA, said he had planned to retire at the end of 2018. Instead, he took a buyout and left the agency at the end of August.

"I just ran the numbers. At the end of the day, I get four months of my life back and some additional money. The math was in my favor. It came down as simple as that," O’Quinn said.

Union leaders there told E&E News that they had sought documents from management on the buyouts offered this year in the Pacific Southwest branch. Managers didn’t provide that information to union officials. Instead, they were only able to obtain records related to the buyouts from employees who were targeted for the offers.

Union officials in Region 9 also expressed worry that this year’s buyouts will further deplete resources for the region.

"They wanted to reduce staff, and this is one method they used to get people to leave," said Mark Sims, president of the EPA Unit Engineers and Scientists of California Local 20, International Federation of Professional and Technical Engineers. "I think the general concern is, ‘Are we going to have adequate staff here in Region 9 to accomplish the mission of the agency?’"

While Region 9’s buyouts were in the single digits this year, they are comparable to what the branch underwent last year. In the summer of 2017, EPA proposed buyouts across the agency in its regional and program offices, making 1,227 offers, including 23 for Region 9 (Climatewire, July 17, 2017).

Outside of the buyout offers, hundreds of other EPA employees have left the agency. EPA’s staffing is now at levels not seen since the Reagan administration.

By Sept. 24 this year, EPA said it had 13,981 permanent and temporary employees, according to its latest contingency plan. At its staffing peak during the Clinton administration, EPA’s workforce was greater than 18,000.

"We emphasized in order to do that, you actually need to have people in place to do the work for those offices," Dreyfus said. "We don’t know how it is going to roll out and how that structure is going to work."

Worries about Trump’s plans for the agency have affected morale at EPA, including in Region 9. O’Quinn said, "People are a bit anxious."

"Morale was not the greatest, because there has been so much change and so much uncertainty. There has not been the greatest communication from headquarters to the regions," he said. "It’s hard to know where your budget is coming from. It’s hard to know how you’re structured."

"The buyouts were offered as part of the EPA’s space consolidation efforts, which are focused on consolidating functions and services in government-owned rather than leased space," Jones said.

The buyout offers fit with EPA’s plan to reduce its footprint.

Earlier this year, EPA said it would close down operations for research office staff there. In addition, human resources employees were also expected to be out. With EPA’s Las Vegas presence coming to an end, agency staff could choose to relocate to another EPA-owned facility (Greenwire, Feb. 9).

EPA employees at the time had credited the move to shutter the agency’s Las Vegas operations to an Obama-era initiative to consolidate federal office space.

"The drivers behind the decision are the continued pressure to reduce the amount of federally leased space by consolidating operations into federally owned space and to reduce our overall operational costs moving forward," said Tim Watkins, director of EPA’s National Exposure Research Laboratory, in an internal email.

Shafir said she now plans to provide consulting for other levels of government, nonprofit groups and businesses. She spoke at a conference last week on reducing food waste but not on EPA’s behalf.

"I have a lot of information in my brain, a lot of connections, that I don’t want to go to waste. There is plenty of work to be done," she said.

O’Quinn is enjoying retirement from the agency.