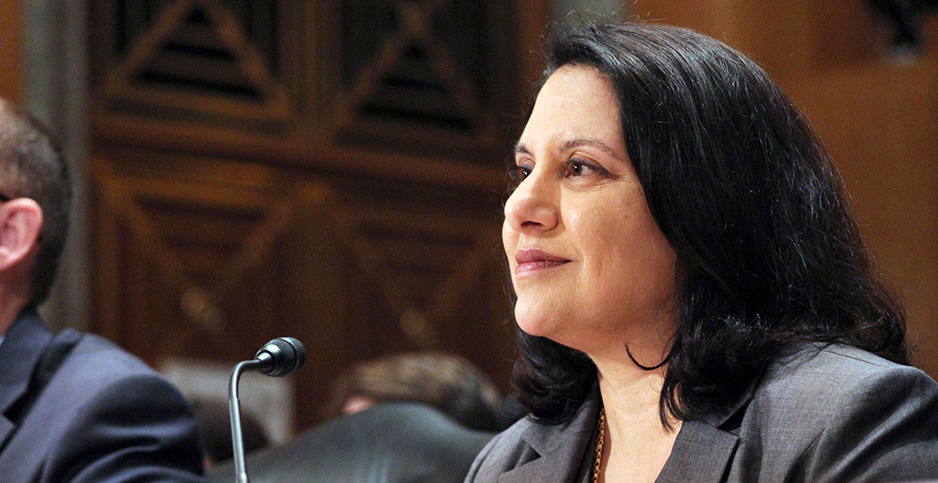 White House Office of Information and Regulatory Affairs chief Neomi Rao is rumored to be a likely candidate to the U.S. Court of Appeals for the District of Columbia Circuit. Senate Homeland Security and Governmental Affairs Committee

Legal scholars are looking at the Trump administration’s regulatory czar as a possible replacement for Justice Brett Kavanaugh’s former seat.

The D.C. Circuit is considered to be the second highest court in the country and, as in Kavanaugh’s case, has been a steppingstone to the Supreme Court.

Those favoring Rao’s nomination point to her academic credentials, work experience, age, gender and even her personal background as factors that could make her an appealing choice.

"She’s thoughtful and brilliant and would likely work well with the other judges. It’s hard to think of a better choice," said Jonathan Adler, director of the Center for Business Law & Regulation at Case Western Reserve University School of Law.

Somin is an active member of the Federalist Society but isn’t involved in the group’s judicial nominee recommendations.

"My guess is they’re looking for people who are conservative, who have some requisite legal background and obviously they care about whether the person has spoken out against Trump in the past or not," Somin said.

Walker noted that because D.C. doesn’t have home state senators, the president has more leeway to choose who he wants for the judicial post.

Rao has led the administration’s efforts to cut regulatory costs and has touted federal agency efforts to roll back "burdensome" standards and make the rulemaking process more transparent (Greenwire, Sept. 25).

Rao’s experience gaining approval from the Senate last year with some bipartisan support could also be a benefit.

Somin thought her chances were good on a second confirmation run, even though the administration’s deregulatory push has faced strong opposition from Democrats.

"I think most likely she would be confirmed, certainly if the Republicans still control the Senate but possibly even if not. Obviously she’s a highly talented and capable person. She knows a lot about administrative law, which is what the main docket of the D.C. Circuit is," Somin said.

There are other factors potentially in Rao’s favor. At 45, she falls right within the early to mid-40s age range when D.C. Circuit judges are typically being nominated.

Rao’s name is not the only one getting some buzz for the D.C. Circuit post. Others include prominent lawyers from business groups, private practice and academia.

"I think it’s worth remembering, remember the EPA’s Clean Power Plan that generated the unprecedented stay out of the Supreme Court, where the D.C. Circuit wouldn’t do that job, one of the last acts of Justice [Antonin] Scalia judicially," she said.

Shanmugam represents Exxon Mobil Corp. in an ongoing battle over whether the oil major must hand over company records on climate change in response to Massachusetts Attorney General Maura Healey’s (D) investigation into whether Exxon misled the public on the issue.

Another potential nominee is Kristin Hickman, an expert in administrative law and tax policy and currently serving as special adviser at OIRA. She’s also a University of Minnesota law professor.

But unlike Gorsuch, Hickman hasn’t called for an outright unraveling of the standard. In a law review article, she and a co-author argued that "claims that Chevron is in decline are overblown, and efforts to overturn Chevron in any meaningful sense are misdirected."