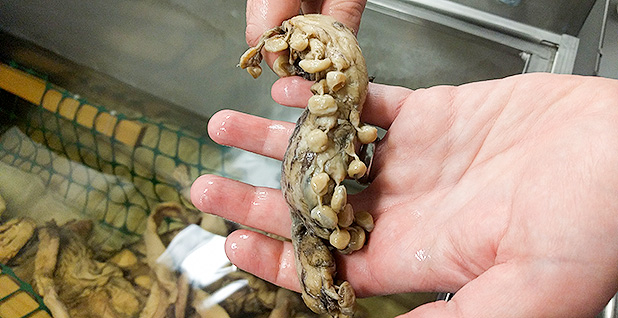 A 26-foot giant squid is among the 280,000 specimens the Bureau of Ocean Energy Management has sent to the Smithsonian, as part of a nearly 40-year partnership. Photo by Emily Yehle.

Katie Ahlfeld opened a steel tank on a recent Tuesday to reveal one of the Smithsonian Institution’s prize possessions: a 26-foot giant squid from the Gulf of Mexico.

"It feels like a wet rubber band," the museum specialist said, offering up a tentacle and pointing out the sharp-toothed suckers that grip prey.

The squid arrived at the museum in 2009, frozen and stuffed into a 5-gallon bucket. Federal scientists had pulled it up in a trawl net, proof that the elusive species lives deep in Gulf waters.

The specimen is now one of 50 million in the Smithsonian’s non-insect invertebrate collection. Its benefactor: the Interior Department’s Bureau of Ocean Energy Management.

For almost 40 years, BOEM — and its predecessor, the Minerals Management Service — has provided the Smithsonian with the invertebrates its scientists find in offshore oil and gas leasing areas. The partnership is mutually beneficial, ensuring the preservation of BOEM specimens and adding more than 350 species to the Smithsonian’s invertebrate collection.

"The BOEM collections are very, very helpful because they are from a broad geographical range and there is a lot of material," said Bill Moser, the acting collection manager in the Smithsonian’s Department of Invertebrate Zoology. "If [scientists] really want to study a species, look for different characteristics, there’s another 100 of that species."

Most of the specimens are housed in suburban Maryland, in the sprawling Museum Support Center of the Smithsonian National Museum of Natural History. Employees call it the Death Star; the ceiling is a matrix of exposed pipes and beams reminiscent of "Star Wars." Wide hallways host the occasional taxidermied mammal, giving the building a cavernous, post-apocalyptic feel.

Two giant squids — painted onto the floor by an ambitious employee — lead to rooms filled with worms, jellyfish, corals, mollusks and other spineless organisms. The non-insect invertebrate collection fills 95 tanks and 18 linear miles of shelves.

It’s one of the oldest collections of the National Museum of Natural History. Now the Smithsonian and BOEM hope it will help pave the way to the next stage of collections: genomes.

The Smithsonian aims to capture the DNA bar code for at least one species out of each of the planet’s 10,000 taxonomic families by 2020. Marine invertebrates make up more than one-third.

Today, most invertebrate specimens are in jars. But one day, they will be in code.

"We call it genomifying the workflow," said Jonathan Coddington, director of the museum’s Global Genome Initiative. "If we can figure out the genetic sequences that identify these species, it will allow us to scale up science-based facts and guidance for environmental policy to an enormous level."

Close up, the methane ice worm looks a little menacing. Its mouth is a gaping hole, atop a flat body covered in bristles and long tentacles.

The worm colonizes the mounds of frozen methane that burst through the floor of the Gulf of Mexico, perhaps feeding off the bacteria that live there. Scientists did not know the species existed until 1997.

Greg Boland, a BOEM biological oceanographer, was on the cruise that discovered it. He remembers the excitement when the pilot of a submersible — part of a team of university scientists — spotted the 2-inch-long pinkish creatures more than 2,000 feet below the surface.

"He saw something move and said, ‘That hydrate has something moving on it.’ And they just discovered these little polychaete worms," Boland said recently. "He brought them up, and everyone was going crazy about it and wrote papers on it."

BOEM had helped fund the cruise, so a worm went to the Smithsonian, where it now floats in a jar of ethanol. This month, the natural history museum will feature the jar in its "Objects of Wonder" exhibit, alongside the last known passenger pigeon, the earliest seal fossil and other rarely displayed objects from the museum’s collection.

To the Smithsonian, BOEM’s partnership ensures a trickle of rare organisms and a stream of common ones from areas of the ocean that are expensive and difficult to research. Each haul also provides a snapshot in time of coastal habitats, a reference for scientists as the climate changes.

It’s the flip side of offshore energy development. With BOEM’s responsibility for oil, gas and renewable energy leasing comes the need for research on deep-sea environments few others see.

"Although our science program is fundamentally directed at addressing environmental impacts — that’s why the Congress gives us money — we try to make sure it’s useful to science more broadly," said William Brown, BOEM’s chief environmental officer.

BOEM’s invertebrate specimens join a collection that stretches back to 1856. The jars are a jumble of shapes and sizes, reflecting the closing and opening of companies that make archival materials. Labels are both printed and handwritten; some date back to the USS Albatross, the first vessel created for marine research in 1882.

"These are the actual specimens that are used to describe species. This is where you go back," Moser said. "This is like your ancient library of Alexandria for the answer."

That library has survived because of diligent care — and ethanol. Specimens can survive hundreds of years in the fluid, assuming no one takes a flame to it.

But DNA can become degraded, and researchers have only just begun raiding the collection for genome-quality samples. Within BOEM’s collection, the Smithsonian has bar-coded only 10 of 6,375 species so far.

New specimens for the collection, however, come in frozen form, ready for immediate genetic sampling.

The biorepository in the Smithsonian’s Maryland complex could be an appliance store.

Upright and chest freezers that contain specimens fill one room, each with two alarms to ensure the power doesn’t go out unnoticed. Next door, rows of liquid nitrogen storage systems keep tissues as cold as minus 160 degrees Celsius to ensure DNA extraction. Opening the hatch releases a liquid nitrogen cloud; employees retrieve samples by first clearing the air with a ShopVac.

Such rooms are the cornerstone of the Global Genome Initiative and its goal to preserve Earth’s "genomic biodiversity" on ice.

BOEM now tries to immediately freeze any specimens it sends to the Smithsonian. The agency believes the effort not only will help science overall — in preserving the DNA of species as Earth’s extinction rate increases — but also will help in fulfilling its environmental monitoring mission.

The vision: scientists identifying species from the DNA in a water sample.

The technology exists, and some agencies already use it. Federal scientists, for example, use water samples to determine whether invasive Asian carp are present in waterways. But the DNA of most species is not known; the genetic "phone book" does not yet exist.

"Until we had these genetic tools, environmental monitoring was physically going out there, seeing something, collecting something, touching something, taking a picture of it, going back repeatedly … to see if things are changing over time, if things are impacted," said Brad Blythe, BOEM’s branch chief of biological and social sciences. "With these water column tools and genetic tools, you can get that same information much more quickly, much more efficiently, and you can tell, ‘Is that environment changing? Are you seeing new sequences from different species coming in that may be invasive?’"

In BOEM, the Smithsonian sees a partner that can get the species others can’t. The Global Genome Initiative has already captured genomes for at least 1,000 marine invertebrate families, but those are largely from tropical environments. BOEM retrieves organisms from the areas less frequented by researchers — but popular for energy development.

In short, it fills the gap.

"We’re at a point where we’ve already pivoted from inventory to observatory, but we don’t have the complete censusing done, and that’s what’s so valuable about this partnership," said Christopher Meyer, a research zoologist with the Smithsonian’s Department of Invertebrate Zoology. "The materials coming from the BOEM are so unique."