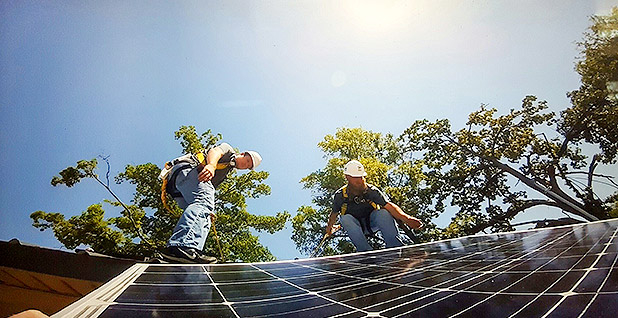 But the cuts will be smaller for a few hundred residential customers with solar panels, and some may see increases, because the Kansas Corporation Commission also approved mandatory charges for distributed generation owners.

The KCC’s decision makes Westar the only investor-owned utility in the nation to impose mandatory demand charges for residential solar owners after Massachusetts reversed a law enabling utility Eversource Energy to implement the charges.

The debate over rooftop solar has been simmering for three years in Kansas, with solar advocates challenging utility claims that solar owners weren’t paying their fair share to maintain the grid.

Regulators rejected those arguments in yesterday’s 43-page order. In fact, they agreed with commission staff that the demand charges represent only "a step towards ending the subsidization of Westar’s DG customers by its non-DG customers."

The demand charges apply to customers who installed DG systems after Oct. 28, 2015. The new rates include seasonal demand charges of $3 and $9 for Westar residential customers who self-generate. The per-kilowatt charge would apply to a customer’s monthly peak hour of electricity use from 2 to 7 p.m. on weekdays.

The new rates for residential DG customers also eliminate tiered seasonal energy rates in favor of a single fixed rate that’s as much as 45 percent lower than what they currently pay.

Westar spokeswoman Gina Penzig said there are about 820 DG customers on its system, 350 of whom will be placed on the new rate.

The effect of the new rate design is hard to quantify because so many factors are involved, including the size of the DG system and when it’s producing electricity, she said.

Westar said customers with 5 kilowatts of demand and monthly usage of 900 kilowatt-hours on average would see an annual decrease of $45. But a DG customer with 6 kW demand and average usage of 750 kWh would see an increase of about $73 a year, Penzig said.

Solar advocates argued that the approval of demand charges is a setback for rooftop solar in Kansas.

"Today’s misguided decision is a major setback for Kansas residents that want to lower their bills with solar," Maddy Yozwiak, regulatory research manager for Vote Solar, said in an emailed statement.

Vote Solar, which testified against demand charges, noted that the order requires Westar to submit an annual report to KCC staff and the Citizens’ Utility Ratepayer Board, including the number of residential DG customers subject to demand charges and analysis of changes in energy use and bill impacts.

"We hope, going forward, this shines a light on the financial impact that Westar’s discriminatory rates can have on solar customers," Yozwiak said.

Although demand charges are standard for large commercial and industrial energy users, they remain controversial for residential customers. Critics contend the charges shouldn’t be mandatory because they’re confusing for many residential consumers who don’t understand the distinction between kilowatt and kilowatt-hour.

The KCC, however, rejected the argument that consumers wouldn’t understand or respond to the new rate structure.

But the KCC in its order said the numbers demonstrate that more than 70 percent of APS customers have no trouble managing energy costs and know their rates included a demand charge.

The commission approved demand charges for residential DG customers as part of a settlement of Westar’s general rate case. Parties to the agreement included the state’s consumer advocate, commission staff and some other large electricity users.

The merger means Westar is now under the same ownership as the state’s other large investor-owned utility, Kansas City Power & Light Co.

KCP&L, too, has a similar demand charge proposal pending before the KCC that’s to be decided by the end of the year.