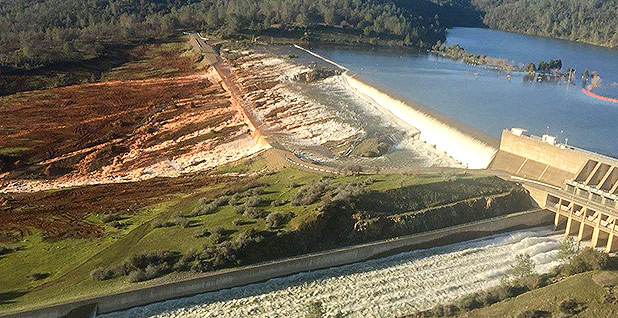 As officials scramble to repair a deteriorating emergency spillway at Oroville Dam in Northern California, documents show environmental groups pleaded with federal officials to reinforce the infrastructure nearly a dozen years ago.

Trouble began last week when a 250-foot-long hole gave way in the dam’s primary, concrete-lined spillway. Officials were forced to reduce the amount of water flowing down that channel, which allowed Lake Oroville to reach full capacity.

That led the reservoir, California’s second-largest, about 80 miles north of Sacramento, to overflow down its emergency spillway last weekend for the first time since the dam was constructed in 1968.

The emergency spillway is a 1,700-foot-wide concrete lip above an exposed hillside. That concrete — and parts of the hillside — began to erode, leading state officials to order nearly 200,000 residents below the reservoir to evacuate (Greenwire, Feb. 13).

Eerily prophetic documents from nearly 12 years ago filed by three environmental groups — Friends of the River, the Sierra Club and the South Yuba River Citizens League — forecast such an event.

The documents were filed as part of Oroville Dam’s relicensing process with the Federal Energy Regulatory Commission, which regulates all nonfederal hydropower dams in the United States. The groups successfully sought to intervene in the proceeding surrounding the state’s pursuit of a 50-year license, a case that is ongoing. The original license expired in 2007; FERC for the past decade has extended it throughout the relicensing procedure.

In an Oct. 17, 2005, motion to intervene, the groups urged FERC to require the state and dam operators to line the emergency spillway with concrete to prevent erosion.

They spoke directly to what would happen if the concrete lip became compromised, a situation they called "loss of crest control."

"A loss of crest control could not only cause additional damage to project lands but also cause damages and threaten lives in the protected floodplain downstream," they wrote.

A July 27, 2006, memo from John Onderdonk, a senior civil engineer with FERC’s Division of Dam Safety and Inspections, said that if the emergency spillway were to be used, it "would not affect reservoir control or endanger the dam."

He also said "in the rare event of a discharge, the emergency spillway would perform as designed" and could conceivably handle a flow of water at a rate of 350,000 cubic feet per second.

But last weekend, water flowed down the emergency hillside spillway at a maximum rate of about 12,000 cubic feet per second — a far lower rate — and significant erosion occurred.

Still, Onderdonk had noted that during an extreme event, it is acceptable for emergency spillways to sustain damage as long as they don’t imperil the dam itself.

As of last night, officials were continuing to send water at a rate of 100,000 cubic feet per second down the damaged concrete primary spillway. The goal is to lower the lake level as much as 50 feet in order to make room for increased inflows during storms forecast for later this week and to avoid using the emergency spillway again. The level has already dropped nearly 10 feet.

Officials are also using trucks and helicopters in an attempt to stop erosion on the emergency spillway with rocks and gravel.

California Department of Water Resources Director William Croyle said yesterday that he was unfamiliar with the environmental groups’ 2005 filings.

"I personally am not aware," Croyle said at a press conference. "We’re not going to get into recommendations or concerns that were raised in the past."

Ron Stork of Friends of the River said FERC’s remarks in the 2006 document were misleading.

His group’s point, he said, was that the dam should not have to rely on an unlined emergency spillway as part of its flood control operations — as Oroville did last weekend.

Stork said it is not unusual for dams to be constructed with one primary, concrete-lined spillway and another unlined emergency spillway. There are two others with that design in California: the Don Pedro Dam in Tuolumne County and the New Exchequer Dam in Mariposa County.

But neither of those two is immediately upstream from a populated area like Oroville is, he said.

FERC declined to comment on the 2005 letter or the response of federal regulators, noting that California’s application for a new license is still pending before the commission.

Some observers expressed optimism that officials had the situation nearly under control.

David Capka, acting director of FERC’s Division of Dam Safety and Inspections, directed the state’s Department of Water Resources yesterday to assemble a five-member independent board to assess damage to the spillway and adjacent areas, and review ways to reduce risk and increase safety during the emergency period and beyond.

Capka said members of the board should have expertise in engineering, hydraulics, dam design and operation.

Capka also called on California to hire an independent third party to analyze and determine the cause of the main spillway’s failure and whether it could happen again. His memo said the board will hold meetings with officials from the state and FERC, and review the third party’s findings.

Jeffrey Mount of the nonpartisan Public Policy Institute of California said the situation "caught a break" with the dry weather early this week, which reduced inflows into Lake Oroville.

Referring to the 2005 documents, he said that FERC probably fell into the trap of engineering inertia.

Mount said it would be very expensive to line the emergency spillway with concrete and, moreover, the dam had functioned properly during heavy rains in 1997. Commissioners’ thinking, Mount said, was probably that "the dam had behaved well. We managed to handle the big flood of 1997 without major damage to the dam, so why would we correct course?"

He also raised the possibility that the events at Oroville provide a snapshot of what may come.

FERC may have dismissed the environmental groups’ concerns because previous models suggested that an event when the emergency spillway was needed was unlikely.

"Maybe it’s much more likely to occur than we thought," Mount said.

In the past, FERC has cited the complexities of climate modeling when U.S. EPA pushed the commission to take a closer look while reviewing hydroelectric projects.

In a 2014 approval of a pumped storage project in California, for example, FERC commissioners told EPA it would be too speculative to attempt to predict the effects of climate change. The agency also, however, said it retained authority to reopen the license to respond to changing environmental conditions, as well as new and reliable data.

"It would be too speculative," FERC wrote, "to attempt to predict future scenarios that may occur due to climate change."