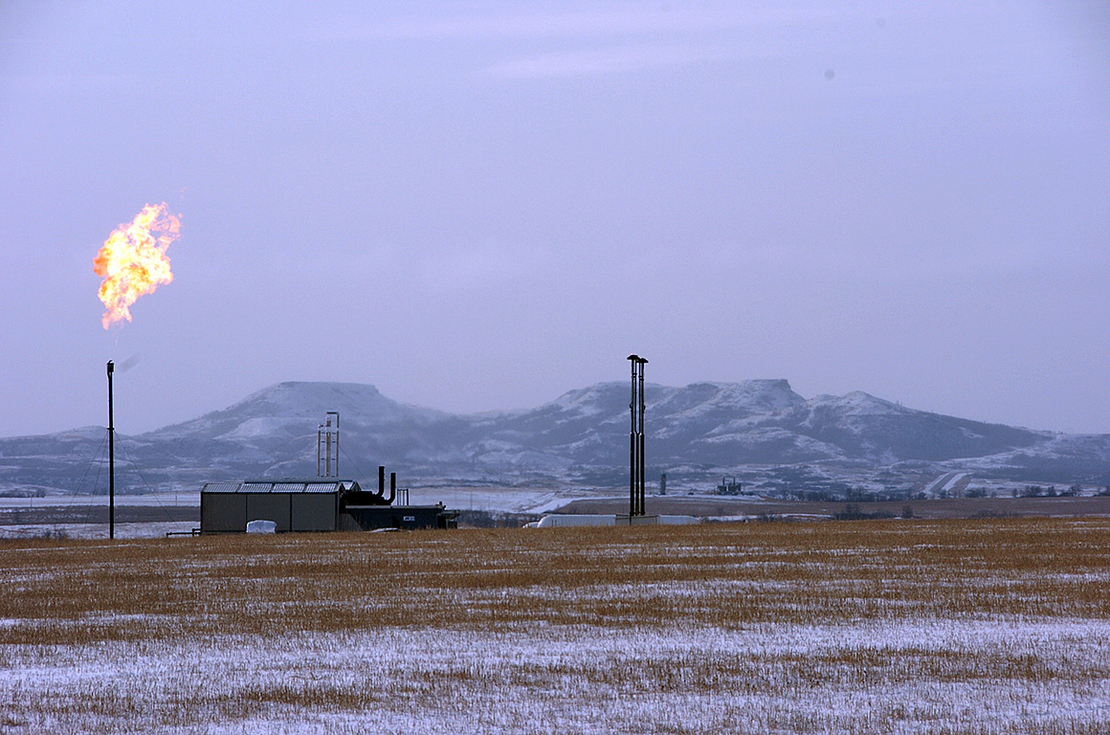 A gas flare is seen at a natural gas processing facility near Williston, N.D. EPA's rules for oil and gas methane will be central to the Biden administration's message at COP 26 in Glasgow, Scotland, which has been dubbed "the methane COP." AP Photo/Matthew Brown

EPA is preparing to release two new draft rules this week that could dramatically reduce the role that oil and gas production plays in driving climate change.

The methane proposals for new and existing petroleum infrastructure would apply to production, processing, storage and transmission — a much broader swath of the oil industry than was regulated under President Trump.

One of the proposals being reviewed by the White House yesterday applies to older, leakier facilities that experts say supply the majority of oil and gas methane.

Environmentalists have been pushing EPA for a decade to clamp down on oil and gas methane, and now they anticipate the White House could go beyond the Obama-era new source rule, which covers only infrastructure built after 2015.

They point to technological advancements in the last five years that make finding and repairing natural gas leaks cheaper and easier for a wider range of operations, including small producers.

“We’ll be interested to see if EPA incorporates some of the new technologies and approaches that have emerged over the last few years,” said Rosalie Winn, an attorney with the Environmental Defense Fund. “That can enable even more frequent monitoring. And we’ll also be looking for more comprehensive coverage, including the more than half a million so-called marginal wells in the United States.”

Greens are hoping for a much tougher rule than the new source standard implemented under President Obama. His administration required the use of low-emissions equipment and twice-yearly or quarterly inspections of equipment to find leakage, but climate advocates say monthly inspections would drive greater emissions reductions.

The Obama administration set a goal of curbing oil and gas methane emissions by between 40 and 45 percent compared with 2012 levels by 2025. But the Clean Air Task Force estimates that the Obama-era new source rule would only deliver a reduction of 22 percent, even if it were expanded to existing infrastructure. CATF and the Environmental Defense Fund argue that reductions of 65 percent are possible through aggressive regulation of both new and existing oil and gas sources.

President Biden, who is preparing to leave Thursday for a European trip that includes an appearance next week at the U.N. climate conference in Glasgow, Scotland, known as COP 26, has not made a specific emissions reduction commitment for the U.S. petroleum sector. But greens say his pledge to cut overall emissions between 50 and 52 percent below 2005 levels by 2030 hinges on strong new rules for oil and gas production.

The Biden administration has also worked with the European Union to launch the Global Methane Pledge, which promises to cut methane worldwide by 30 percent compared with 2020 levels by 2030. More than 30 countries have signed the commitment. The goal would require major oil and gas producers, like the U.S., to make particularly steep cuts.

“They’re relying heavily on their intention to crack down on methane from oil and gas operations in their diplomacy for COP with their methane pledge,” said Hana Vizcarra, a staff attorney with Harvard Law School’s Environmental & Energy Law Program. “I think that’s absolutely crucial for their credibility and their ability to lead and push action forward during COP.”

Methane is the second most important driver of climate change after carbon dioxide and is more than 80 times as potent as CO2 over a 20-year time frame. The Intergovernmental Panel on Climate Change, the U.N.’s climate science body, released a report in August showing that cutting methane is required to buy the world time to decarbonize without pushing warming above 1.5 degrees Celsius.

Biden promised in January that the methane proposals for new and existing petroleum infrastructure would be out this fall — though their release has slipped form September to October.

The twin rules for methane could arm Biden with a potentially important achievement to help make the case for renewed U.S. climate leadership in Glasgow.