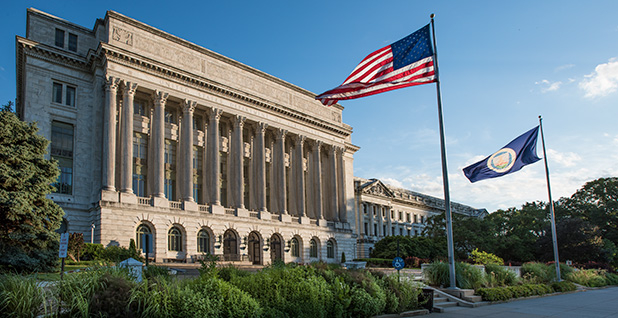 Economic reports out of the Department of Agriculture, pictured, could be delayed because of staff shortages due to the Trump administration’s relocation plans for some parts of the department. USDA/Flickr

Department of Agriculture reports on issues ranging from foodborne illnesses to healthy diets for military veterans could be delayed — and others discontinued — as the department faces staff shortages connected to plans to move the Economic Research Service (ERS) away from the nation’s capital.

That’s the conclusion of administrators at ERS, who have outlined in internal communications dozens of forthcoming reports that are in danger of missing scheduled release dates.

The delay of reports and shortening of others is a result of staffing shortages at ERS, which along with the National Institute of Food and Agriculture is relocating most staff to the Kansas City area, according to an internal communication given to ERS management staff and obtained by E&E News.

As many as 80% of workers at the two agencies have decided not to relocate, said Senate Agriculture Committee ranking Democrat Debbie Stabenow of Michigan today at a news conference on Trump administration science policies.

Stabenow also released a list of research projects that the administration has not publicized.

USDA has said it aims to complete the relocation by Sept. 30 — the end of this fiscal year — although employees on certain teams have been asked to remain on the job in Washington until January or March.

"Due to decreased staffing levels, ERS will for considerable time be unable to provide the same level of breadth and depth in its economic research and outlook analysis as it did in the past," according to the document given to staff.

In addition to reports listed on the ERS calendar, officials predicted delays in reports that have already been submitted for peer review. Others, such as county-level oil and gas production reports, will be discontinued until further notice, they said.

Some reports likely to be delayed include items on veterans’ diet quality, food purchasing patterns and obesity; agricultural trade with Canada and Mexico; the use of cover crops on farms; and a paper called "The Cost of Foodborne Illness: What’s Science Got to Do With It?"

The monthly food price outlook reports for October, November and December may be delayed, according to the list. So may a report on "SNAP Impacts on the Rural and Urban Economies in the Aftermath of the Great Recession."

The list is for internal use and subject to change, and it will be updated as needed, according to the communication.

As of the end of August, USDA reported 182 employees remaining at ERS and 162 at NIFA, reflecting deep losses ahead of the relocation. NIFA had fallen from 340 workers, and ERS from nearly as many, according to the American Federation of Government Employees labor union, representing employees at the agencies.

Officials at USDA said the employee attrition is in line with expectations, although they’ve encouraged as many workers as possible to agree to the relocation offer. In addition, a spokesman said last week that employees on certain teams that appear most likely to be affected at ERS and NIFA have been asked to stay on the job until as late as March, including some who have said they plan to leave their positions rather than make the move to Kansas City.

The department didn’t immediately respond to a request for comment on the delayed reports.

One ERS researcher who decided to leave his job rather than relocate, Andrew Crane-Droesch, said at a news conference today that the disruption is setting back research on climate and other issues.

"It will take a long time to rebuild it," he said.

Crane-Droesch said he declined to move to Kansas City despite enjoying his work, because the relocation would have taken him too far from family. He said he took a job with the University of Pennsylvania in Philadelphia, where he has family.

While USDA adjusts to the staff shortage, the relocation issue continues to play out in debates over congressional appropriations. House Democrats have sought to stop or delay the effort through an annual agriculture spending bill for fiscal 2020, but the Senate appears to be moving in the opposite direction, with appropriators on the Agriculture Subcommittee approving $25 million to support the relocation.

“It is a mystery to me how we find a solution to prevent this from happening. It’s already in motion.”

There, majority Republicans say they support Perdue’s position that moving the agencies will save the government money and put employees closer to rural areas while maintaining the department’s research mission.

Rep. Chellie Pingree (D-Maine), who has pushed for appropriations provisions against the USDA moves, said that effort seems to have hit a dead end.

"It is a mystery to me how we find a solution to prevent this from happening," Pingree told reporters yesterday. "It’s already in motion."

Given the loss of experienced researchers, congressional Democrats have said they worry that work on issues such as climate change may be compromised.

"It’s hard for us not to see this as a way for this administration to undermine those very important factors," Pingree said.

Stabenow, along with the ERS scientist and Sens. Tom Carper (D-Del.) and Brian Schatz (D-Hawaii), cited USDA’s moves at a news conference criticizing the administration for downplaying research on climate change across agencies.

Stabenow told reporters that although Congress can’t do much to stop the process, she’ll continue to press USDA for information about how much money the relocation is costing or saving, and the effect on agency work.