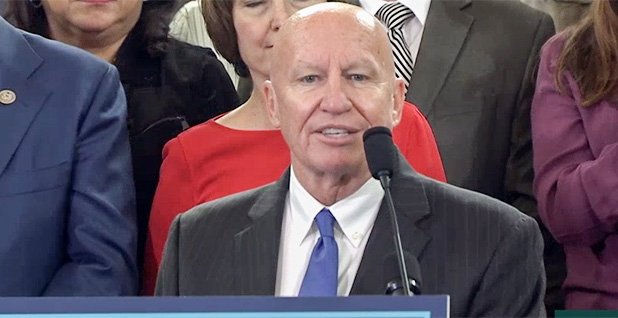 A massive tax overhaul House Republicans unveiled yesterday is already drawing fire from the renewable energy industry, among other business groups, underscoring the challenges Congress may face in passing the legislation by the end of the year.

House Republican leaders rolled out what they described as a once-in-a-generation rewrite of the tax code, promising it would slash corporate rates and personal income taxes for most Americans by limiting scores of breaks and other deductions.

House tax writers said they anticipate some blowback and expect the legislation to change as it moves through Congress, but both the White House and House GOP leaders insist it will be law by 2018.

"We just finished the opening ceremonies of the lobbyist Olympics, my phone has got all kinds of messages and we hear all kinds of criticisms. But look, that’s the nature of the process, so I am not surprised to hear it," Rep. Peter Roskam (R-Ill.), a senior member of the Ways and Means Committee, told reporters after the bill’s release.

Revisions could come even before the committee marks up the legislation next week with the panel expected to release a revised "chairman’s mark" before it. The markup begins Monday and is expected to last through Thursday.

Speaker Paul Ryan (R-Wis.) brushed off a question about possible political fallout for the GOP in 2018 if the tax bill flounders, saying yesterday, "We told the American people this is what we’re going to do if we get this majority, and guess what? We’re doing it."

The renewables sector is blasting the House plan, saying it endangers billions of dollars in investments.

The bill would eliminate a long-term credit for solar, change how wind projects can qualify for incentives and essentially cut the value of the production tax credit in half.

If this became law, "it would be very ugly," said Gregory Wetstone, president of the American Council on Renewable Energy.

The industry is also upset about a provision that would change Treasury Department guidance on when construction starts, disqualifying many projects.

In 2013, the IRS outlined two ways that wind projects could meet "start of construction" criteria — a key metric for obtaining credits. Currently, projects can qualify by conducting significant physical work or incurring 5 percent of eligible project costs, as part of a "safe harbor" provision.

The bill would override the safe harbor provision, even though many developers have signed binding contracts and invested billions of dollars on turbine orders under it, said Wetstone.

"No American job is safe if Congress can change the terms of business contracts years after agreements are signed and billions of dollars are spent," added Tom Kiernan, CEO of the American Wind Energy Association.

AWEA said the plan puts more than $50 billion in investments at risk by taking away certainty ensured by the 2015 deal that extended and phased out its credit.

Additionally, the House Republican tax plan would sunset a long-term solar credit at the end of 2027.

"It’s not as immediate," but "it says something" that solar is targeted when other resources are not, said Wetstone.

The Solar Energy Industries Association said that while it was continuing to evaluate the impact of the proposal, it was pleased the current schedule for the investment tax credit over the next five years is intact.

Under a 2015 budget deal, lawmakers extended the wind production credit through January 2020, with incremental phase-downs starting this year.

The 30 percent solar tax credit was extended through 2019 before an incremental decline to 10 percent in 2022.

The House bill also disappointed the National Biodiesel Board because it didn’t include extensions of biodiesel tax breaks.

The group said it would work with Congress to "craft a robust biodiesel tax incentive that will provide public benefits such as rural job creation, a diversified national fuel portfolio and fewer toxic pollutants in the air."

The American Institute of Architects said it would oppose the bill, citing its exclusion of certain professional services companies from qualification for the small-business rate of 25 percent, as well as the elimination of credits for energy-efficient buildings.

While the House measure preserves some, but not all, oil and gas breaks, the American Petroleum Institute praised it as a "bold step" to updating the code.

"As this process continues and API and its members review in greater detail the 429-page bill, the oil and natural gas industry stands ready to work with Congress and the administration to enact strong, pro-growth tax legislation to ensure that our industry remains a major driver of economic growth, investing billions each year in the U.S. economy and supporting over 10 million U.S. jobs," API CEO Jack Gerard said in a statement, without getting into details.

While Republicans and their allies greeted the bill with cautious optimism, there were signs yesterday of hurdles ahead for some of its provisions.

Freedom Partners, part of the billionaire Koch brothers’ political network, expressed concern in advance of the bill’s release over language intended to discourage companies from moving operations overseas, which the group said could be another form of the border adjustment tax (BAT).

House leaders dropped the BAT plan months ago, following an outcry from retailers and some refiners that feared its 20 percent import tax would simply raise prices for consumers.

"This would be BAT by another name, it would violate the unified framework, and it would increase costs on virtually everything Americans buy every day," Freedom Partners Chamber of Commerce Executive Vice President James Davis said in a statement.

House Ways and Means Chairman Kevin Brady (R-Texas) dismissed the notion that it was a "backdoor BAT."

"After all I’ve been through, the answer is no, of course not," he said. "Look at the design. We set that idea aside months ago when we announced the framework with President Trump and the Senate as well. That idea has been set aside and is nowhere near this tax reform."

The National Federation of Independent Business said it won’t support the bill as currently written because it does not cut taxes for enough small businesses. And the National Association of Homebuilders warned the plan could spark a recession by proposing to limit a popular mortgage interest tax write-off for homeowners.

The Senate could release its own tax legislation as soon as next week with substantial differences.