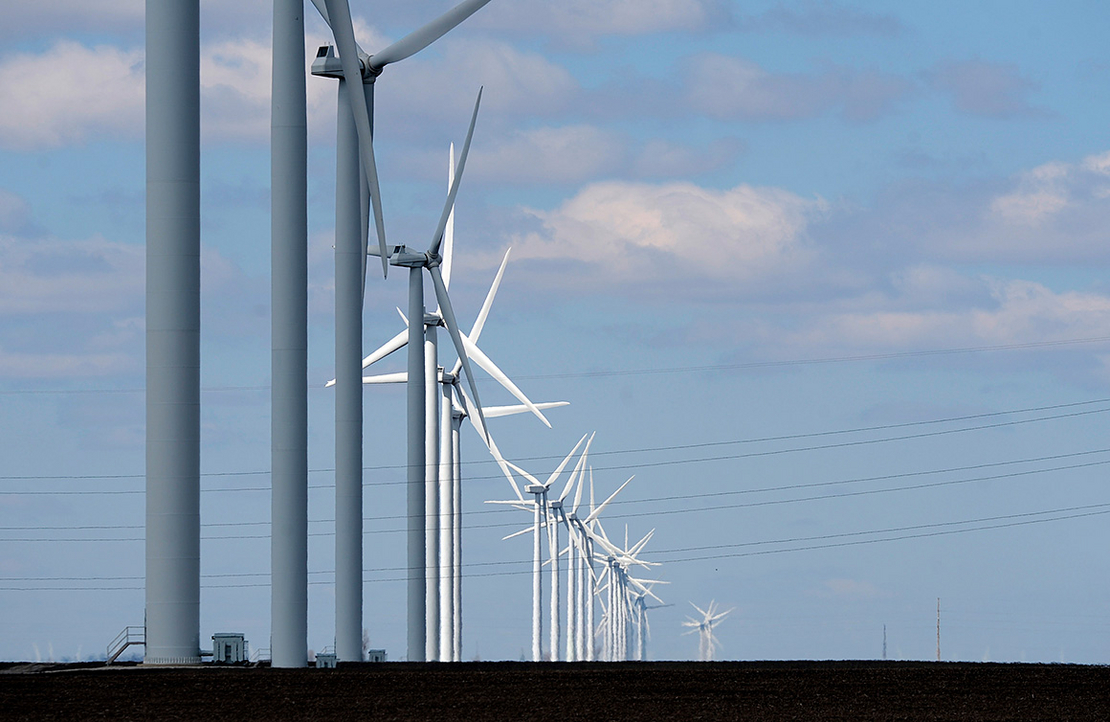 Wind turbines in Indiana. The Indianapolis Star via AP, File

The largest U.S. grid operator advanced a plan last week to ease bottlenecks holding back thousands of solar and wind projects, but critics say it means future projects may face even longer delays.

The plan from PJM Interconnection LLC seeks to address a surge of requests from renewable energy developers waiting to connect their projects to the grid system.

Charged with managing the flow of power in 13 states and the District of Columbia, PJM says it has been unable to keep up with so-called interconnection requests in recent years. That has sometimes led to projects being delayed or canceled by developers.

About 225,000 megawatts of energy projects — 95 percent of which are wind, solar, energy storage or a hybrid of renewables with storage — are currently waiting to receive interconnection agreements from PJM that would allow them to come online. To address the backlog, a PJM committee last week endorsed a proposal to prioritize about half of the projects in the queue, which collectively represent over 100,000 megawatts of capacity, the grid operator said.

The goal of the plan is to advance projects that are “ready,” rather than ones in earlier stages of development, according to Susan Buehler, chief communications officer at PJM. Still, the proposal also calls for a two-year pause on new interconnection applications.

“We are going to see a better, faster, more efficient way to integrate projects into the system and enable states to meet their renewable portfolio goals,” Ken Seiler, vice president of planning at PJM, said in a news release last week. “It’s going to help us long term to prepare for the grid of the future.”

While PJM’s proposal is “the best it could offer,” it is not an ideal solution, said Gizelle Wray, senior director of regulatory affairs and counsel at the Solar Energy Industries Association. By closing the door to new interconnection applications until 2024, businesses and others seeking to invest in solar in the coming years will have to wait longer to connect to the grid, Wray said.

“This should never have happened. … Broadly, the interconnection process is broken, and grid operators are failing to plan their transmission systems for the clean energy transition,” she said in a statement.

As a regional transmission organization (RTO), PJM is tasked with ensuring power remains reliable, in part by helping identify upgrades to the transmission system that may be needed when a new energy project is proposed. One factor contributing to the interconnection backlog is the prevalence of projects that “aren’t ready to go,” Buehler said.

“So we’re spending a lot of time studying them, and when it comes time to figure it out, we realize they don’t have investment money, they don’t have permits, and there are a lot of issues,” Buehler said in an interview.

To that end, the grid operator’s proposal includes a new study process, so that PJM could address projects that have reached financial and permitting milestones before moving onto others, PJM said. The new interconnection process, which would take effect in 2024, would also allow projects that don’t necessitate grid upgrades or don’t need to be studied to move forward faster.

In the interim, PJM would prioritize “backlogged” projects, remove projects that are more speculative from the queue and hold off on adding any new projects to its queue. Meanwhile, the grid operator has made “significant progress” in hiring staff to help with interconnection studies and other efforts, and plans to continue adding staff over the next year.

“We are NOT stopping any analysis but rather making sure we prioritize projects that are ready to go. It means we will be able to move faster,” Buehler added in an email.

PJM’s proposal comes as other grid regions are seeking to resolve complaints over long interconnection queues that developers say pose an increasing threat to states’ and President Biden’s clean energy targets. The president has set a U.S. goal of 100 percent carbon pollution-free electricity by 2035, and some states also have plans to develop carbon-free power grids within the next few decades.

The Federal Energy Regulatory Commission is expected to release rules this year that will reform how electric transmission lines are planned and paid for, an effort that may also address interconnection queue backlogs. Some regulators and advocates, however, are frustrated by the pace of progress.

At the recent annual conference of the National Association of State Energy Officials, for example, FERC Chair Richard Glick was asked about the commission’s efforts to resolve backlogs facing renewable energy planned in the Southwest Power Pool region. SPP manages transmission and the flow of power in a swath of the central United States.

“We currently have about 10 gigawatts of wind and 10 gigawatts of solar in the queue at Southwest Power Pool. What conversations are you having with the RTOs, because they largely control what resources we can add to the grid and how our transmission goes?” Kenneth Wagner, Oklahoma’s secretary of energy and environment, asked Glick, who gave the keynote address.

A spokesperson for SPP also noted the recent changes. The grid operator has committed to increasing its budget and staffing dedicated to interconnection studies, among other measures, according to the FERC order.

As for PJM, the package of reforms approved last week represents a step in the right direction, said Kat Burnham, a principal at Advanced Energy Economy. The plan now moves to another committee within PJM, and the grid operator aims to file the proposal with FERC in May.

Still, PJM should have addressed the interconnection backlog before it got to where it is today, Burnham said.

“PJM’s current situation offers a cautionary tale to other [RTOs], utilities, and regulatory agencies to prepare early for the clean energy transition and the influx of new projects that will come with it,” she said in a statement. “To meet state and federal and customer clean energy and climate goals, the number of new carbon-free sources of generation entering the queue will only increase in the next decade and beyond.”