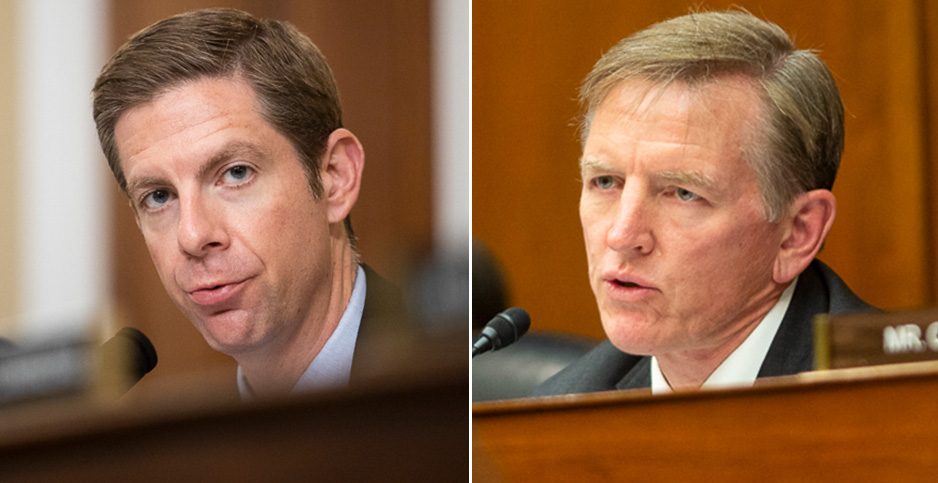 A House subcommittee hearing yesterday made it clear that Democrats and Republicans are not going to work together on a renewable energy bill that members of both parties say they support.

The "Public Land Renewable Energy Development Act of 2021" has become mired in partisan bickering in the aftermath of the Jan. 6 attack on Capitol Hill by a mob of pro-Trump supporters.

Thus, two identical versions of the legislation were introduced last week, by California Democratic Rep. Mike Levin and Arizona Republican Rep. Paul Gosar, who has sponsored similar legislation the past eight years (E&E Daily, May 20). Gosar and Levin co-sponsored what was largely the same bill in 2019.

The chair of the subcommittee where the bill was being considered, Rep. Alan Lowenthal (D-Calif.), made it clear yesterday that the insurrection, and attempts by some Republicans to downplay it, changed things politically.

"There’s no denying there’s an ongoing lack of trust and heightened partisanship following the events of Jan. 6," he said.

Democrats at yesterday’s Subcommittee on Energy and Mineral Resources hearing said they plan to vote for Levin’s H.R. 3326, which he introduced as the sole sponsor of the measure.

But Republicans argued that Levin’s decision to drop Gosar from the latest version of the bill is a power play designed to punish the outspoken Republican in the wake of the Jan. 6 attack, and they plan to vote for Gosar’s identical H.R. 3330, introduced the same day as Levin’s bill.

"It is regrettable that what has been an extremely … broad bipartisan effort for several Congresses has now devolved into a rank partisan power play by the Democratic majority," Gosar said.

Republicans have thus far been noncommittal on whether they’d vote for Levin’s bill (E&E Daily, May 24).

Lowenthal attempted a gesture of goodwill, committing to hold a separate hearing on Gosar’s H.R. 3330.

But Lowenthal and Natural Resources Chair Raúl Grijalva (D-Ariz.) also made it clear yesterday that the partisan friction over the legislation is tied to Gosar and his comments downplaying the significance of the Capitol Hill riot. Gosar has also earned scorn from Democrats for voting against certifying President Biden’s Election Day victory.

Grijalva pointed to the fact that the Levin and Gosar bills are identical as proof that "we all agree on the policy."

Keeping Gosar as an original sponsor of the bill could torpedo the bill’s prospects, Levin said.

"My only goal with this bill is to get it signed into law," he said. "And as I explained to Mr. Gosar in a conversation we had on the floor, having his name at the top could be detrimental to that goal."

BLM: ‘We support it’

The discussion at yesterday’s hearing marked a significant departure from the near-gleeful bipartisanship on display during a hearing on the same bill two years ago, in the same subcommittee, sponsored by Gosar and Levin.

At that hearing, Lowenthal lauded not only the Gosar-Levin bill, H.R. 3794, but also the spirit of cooperation from both parties in support of the measure (E&E Daily, July 26, 2019).

"You know, regardless of the importance of this [bill], and it’s very, very important, the fact that we are really speaking as one voice — Republicans and Democrats — on this issue is critically important for the nation," Lowenthal said at the time.

At yesterday’s hearing, Levin’s bill drew strong support from witnesses, including Nada Culver, the Bureau of Land Management’s deputy director of policy and programs and its acting director.

"This legislation aligns with the administration’s goal of promoting renewable energy development, and we support it," Culver said.

Though Culver only mentioned Levin’s bill, his and Gosar’s bills are word-for-word identical pieces of legislation.

Both would require the Interior secretary, in coordination with the secretary of Energy, to identify, evaluate and "establish priority areas" where geothermal, solar and wind energy projects should be located. Applications for renewable energy projects in these areas would be "given the highest priority for incentivizing development thereon," according to the bill text.

The bills would also establish a revenue-sharing plan, beginning Jan. 1, 2022, for the disbursement of all "bonus bids, rentals, fees, or other payments under a right-of-way, permit, lease, or other authorization" for wind and solar projects on federal land.

The revenue-sharing plan would dictate that 25% of revenues go to the state in which the project is located; 25% to "one or more counties" where the project is sited; and 25% to federal and state agencies "to facilitate the processing of renewable energy permits on Federal land."

The final 25% would go to a Renewable Energy Resource Conservation Fund administered by the Interior secretary, which the bill would establish.

Both Trout Unlimited and Ormat Technologies were listed as endorsing the Levin measure in a press release from the lawmaker’s office last week that announced the reintroduction of the bill.

"We applaud the reintroduction of H.R. 3326 because it will establish these priority areas you’ve heard about today," Thomsen said. "These preferred locations, prioritizing permit applications for priority review, [are] critical."