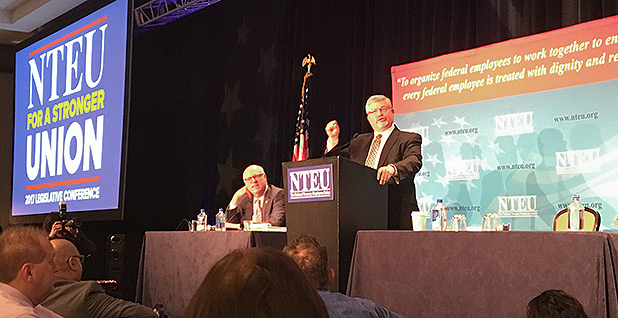 EPA’s second-largest employees union is raising fresh concerns about the agency’s plans to reopen during the COVID-19 pandemic.

National Treasury Employees Union President Tony Reardon said his members’ questions remain unanswered as EPA has moved forward to reopen regional offices across the country. EPA employees have been teleworking since March due to the virus.

"NTEU’s position is that substantive communication between labor and management, before actions are taken, is the best way to identify and solve workplace issues," Reardon said in a statement released to reporters Friday.

"This is particularly important when the health and safety of employees is at stake," he said. "It is disappointing that EPA management does not appear to agree."

NTEU represents about 2,100 EPA employees at various regional offices for the agency as well as its headquarters.

An EPA spokeswoman said the agency has held seven briefings with its unions and walked them through the agency’s reopening plan before it was distributed to employees.

"We answered all of the questions raised by the union up to that point. Further, we have met all of our bargaining responsibilities to this point," said the agency spokeswoman.

EPA Administrator Andrew Wheeler announced May 21 that the agency would begin a phased reopening with staff slowly returning to the workplace, beginning with EPA Regions 4, 7 and 10. EPA Region 6 told employees last week they would begin a similar process (Greenwire, May 29).

Meanwhile, union leaders say they have been given little information. NTEU representatives have participated in four briefings with EPA officials to discuss reopening, but no written plans were provided, and those agency officials "were unable to answer basic questions about employee safety and working conditions," Reardon said.

EPA has since posted on its intranet guidance documents on reopening. NTEU has received them and requested a briefing with the agency to begin negotiating reopening plans with the union’s chapters.

Reardon said employees the union represents in Lenexa, Kan., in EPA Region 7, learned their building was reopening before NTEU had a chance to discuss their working conditions.

In addition, EPA employees at the agency’s Washington headquarters have "multiple questions" that are unanswered, like how EPA will deal with different reopening standards in the nation’s capital, Maryland and Virginia, which will affect public transit, said the NTEU president.

NTEU is pleased that EPA employees can continue to telework during the agency’s first two phases of reopening but is still worried about how social distancing will be enforced, the supply of hand sanitizer and disinfectant wipes, and how offices will be cleaned.

"It appears that EPA has no intention of providing personal protective equipment to employees and the agency is instructing workers to bring their own masks if the wearing of masks is required by state or local order. Frankly, this is not good enough," Reardon said.

The union leader said he hopes EPA will involve their representatives more as it reopens more offices.

"EPA employees have been teleworking successfully throughout this pandemic, and carrying out the agency’s important mission while also protecting themselves and their families. We hope the agency will consult with employee representatives more fully and forthrightly, rather than dismissing their concerns in the press," Reardon said.

The EPA spokeswoman said as Wheeler has stated, "EPA’s plan for an eventual phased return to agency offices will take a measured and deliberate approach that ensures our employees’ health and safety."

She noted the agency has a meeting with NTEU on Wednesday. The agency spokeswoman also said telework remains available through phase 2 of EPA’s reopening plan and employees are not being forced to return to the office.

"This is very clear in our guidance to employees. The agency has also shared with the unions and posted for employees the information on how we are addressing facility issues as we move through reopening," said the spokeswoman. "We look forward to the June 3 conversation with NTEU on these documents."

NTEU pressed EPA earlier on its reopening plans. Last month, Reardon sent a letter to Wheeler asking the agency to consider offering COVID-19 testing for employees and taking their temperatures, among other safety measures.

Other unions have been critical of EPA’s reopening during the pandemic. American Federation of Government Employees Council 238, which is EPA’s largest union and represents about 7,500 employees, said in a letter to Wheeler that there was "no justification" to have staff return given the risks from the virus.