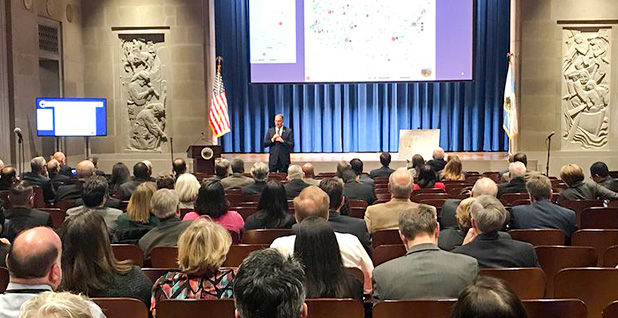 Senior Interior Department leaders from across the country met in Washington this week to discuss a reorganization of the agency. @SecretaryZinke/Twitter

The tough part starts now, for an ambitious Interior Department reorganization plan whose broad outlines were mapped out yesterday and today for senior staffers.

Headquarter sites for the proposed 13 administrative regions must be identified; at least two cities already have been floated. Potential personnel transfers must be fleshed out. Short- and long-term costs and benefits must be brought to light. Congress, and maybe K Street, must be convinced.

And, inevitably, there will be both winners and losers in the massive bureaucratic undertaking that could define Interior Secretary Ryan Zinke’s tenure while it redirects an untold number of the department’s 70,000 full-time employees.

"This change will require the bureaus within the Department of the Interior to work more closely together on key management decisions," Zinke said in a new video, adding that "now’s the time to be transformative."

While Zinke added that certain department administrative functions like "budget, personnel and legal will see little, if any, change at all," he stressed that key decisionmaking within an ecosystem will be "more joint and more collaborative in approach."

"Joint" refers to the military’s system of unified combatant commands, which Zinke, a former Navy SEAL, cites as an inspiration.

Zinke plans to propose dividing the Interior Department and the millions of acres it manages through various bureaus into 13 regions across the Lower 48 states, Alaska, the Pacific Islands, Puerto Rico and the Virgin Islands (Greenwire, Jan. 10).

Interior is expected to reveal final details of the reorganization plan in President Trump’s fiscal 2019 budget request, slated for next month.

Zinke’s vision was presented to about 150 members of the Senior Executive Service, whom Deputy Interior Secretary David Bernhardt described in an interview as "the top professionals of the department." Zinke’s hourlong presentation yesterday morning during the first day of a two-day "leadership summit" at Interior headquarters was followed up yesterday afternoon and this morning with breakout sessions.

One breakout session included state directors with the Bureau of Land Management serving as directors of the proposed regional offices and discussing the logistics of such a change.

For example, BLM Oregon-Washington Director Jamie Connell during the session served as director of the Northern Rockies region covering western Montana, Idaho and the eastern portions of Washington and Oregon during this breakout session yesterday; California Director Jerry Perez served as director of the proposed Northern Pacific Mountains region covering the western halves of Washington and Oregon, as well as the northern half of California, sources said.

"This week was all brainstorming, so the next step [is] going through all the ideas that were put on the table," Interior spokeswoman Heather Swift said today.

Interior must first identify suitable, centrally located sites to serve as headquarters for each region.

Under the proposed reorganization plan, the 13 regions — each covering hundreds of thousands of square miles extending into the Gulf of Mexico, the Atlantic and Pacific oceans, and the coast of Alaska — would split states like Colorado, Nevada and Wyoming into multiple sections.

Agency officials have already discussed potential sites for the headquarters in each region, sources said.

Among the suitable sites discussed so far are Toledo, Ohio, for the proposed Great Lakes-Ohio region and Birmingham, Ala., for the South Atlantic-Gulf region, sources said.

An Interior source said agency leaders have discussed the idea of asking states to "bid" on housing regional headquarter sites in their state boundaries by offering the use of buildings and other infrastructure.

Some Interior officials expressed concerns during the summit breakout sessions about splitting up states into different regions.

For BLM, this would represent a seismic policy change.

Western congressional leaders and governors have traditionally supported a single BLM state office, with one state director with whom their staff can coordinate on issues or problems.

When BLM three years ago tried to combine the BLM New Mexico and Arizona state offices, the idea drew bipartisan opposition from Congress.

BLM dropped the proposal in September 2015.

Before it did, a coalition of 13 congressional leaders, led by Rep. Paul Gosar (R-Ariz.), in May 2015 sent a letter to former BLM Director Neil Kornze asking him to ditch the idea.

Among the reasons, they wrote, is that they feared "this potential consolidation is part of a larger move by the BLM to create more multi-state offices in the west." They added, "We believe this is a poor model and should be abandoned."

Zinke, then a GOP congressman from Montana, signed the letter.