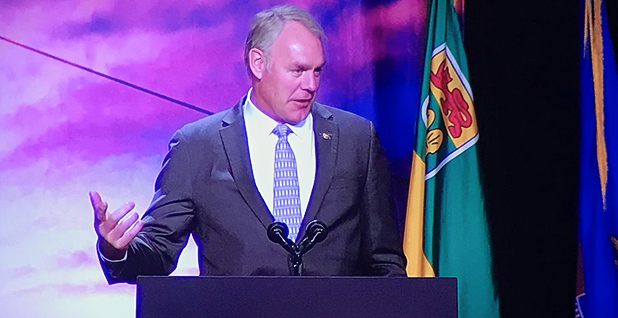 Zinke said he wants to group Interior’s various agencies into a series of geographic regions, the same way the department organizes to fight wildfires. Planners in each region will focus on three specifics, he said: promoting recreation, preserving wildlife and natural resources, and streamlining environmental permits.

He made the comments at the Williston Basin Petroleum Conference, the same forum where then-candidate Donald Trump pledged to make the United States a dominant energy producer (E&E Daily, May 27, 2016). Zinke framed the permitting changes as a way to promote oil and gas production on federal land.

That, in turn, will provide revenue to pay for the backlog of maintenance problems at the country’s national parks, he said, and reduce the need for wars in energy-rich regions like the Middle East.

"We have to get better at permitting. If a project is bad, call it a bad project," Zinke said.

"But if a project is good, then government needs to get out of the way and let industry go ahead and make the investment and rebuild America. That’s the promise the president has said, and that’s the promise that we’re going to deliver."

As an example, he cited the Memorial Bridge that stretches between Arlington, Va., and Washington. It’s been slated for replacement for 17 years but has been delayed by permitting issues, Zinke said. Meanwhile, the cost has grown from $60 million to more than $200 million — one of the largest transportation projects in the National Park Service.

Zinke also acknowledged that Interior’s recent offshore oil and gas lease sale, which he had predicted would be a bellwether, attracted offers for only about 2 percent of the acreage that was up for bid. The only bidders were large companies looking to consolidated their positions. The results show that most companies are looking to explore for oil onshore, he said.

"There is no doubt that offshore oil and gas is a greater risk," he said.

The remarks drew a warm welcome from the crowd made up largely of oil and gas producers. North Dakota is the second biggest oil-producing state after Texas, pumping just under 1.2 million barrels a day. About one-fifth of the state’s oil comes from wells on the Fort Berthold Indian Reservation, which Zinke’s department oversees.

Zinke is scheduled to spend four days in North Dakota and visited Theodore Roosevelt National Park yesterday with Gov. Doug Burgum (R). He was also scheduled to speak to leaders from Fort Berthold about ways to speed up pipeline permitting.

Environmentalists have called on Zinke to block a proposed oil refinery that’s slated to be built about 3 miles from Theodore Roosevelt National Park. He didn’t address those concerns in his remarks and didn’t take any questions from reporters in Bismarck.

Zinke, a former Navy SEAL commander, emphasized it’s better to produce oil and gas in the U.S. under "reasonable regulation" than in countries with fewer controls. It’ll also reduce the need to send troops to the unstable regions, he said.

"I don’t want your children ever to see what I’ve seen," he said. "To deploy our troops overseas to fight for energy when we have it here is immoral."