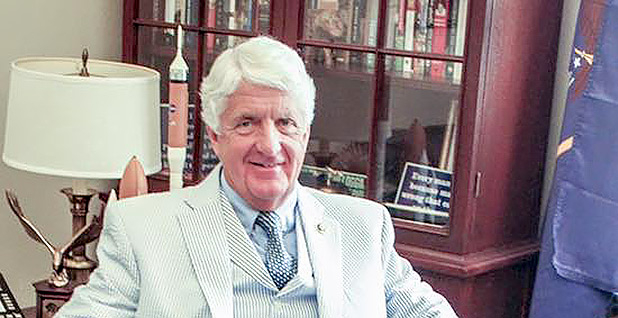 House Natural Resources Chairman Rob Bishop (R-Utah) is looking to scuttle the Endangered Species Act — and he hopes to have a sympathetic ear with President-elect Donald Trump. Photo courtesy of Bishop via Facebook.

A top Republican with the ear of the Donald Trump team is aiming to shoot down the Endangered Species Act — spurring conservationists to prepare for battle.

"I’m not sure if there’s a way of actually reforming the Endangered Species Act or if you simply have to start over again," House Natural Resources Chairman Rob Bishop said in a recent interview with E&E News.

"Repeal it and replace it," the Utah Republican said is his preferred approach.

Rather than ending funding for agencies that carry out the four-decade-old law, it must be dismantled altogether, Bishop argued.

"Some people give the simplistic approach: Why don’t you just defund it? That doesn’t solve the problem," he said.

Bishop, who opposes the ESA because of restrictions it can place on development and recreation, likewise said minor adjustments to the law or passage of riders to remove protections from individual species are insufficient.

"I would like to see a fundamental reform because that’s definitely needed," he said. "If you do it piece by piece, it may actually complicate things and make things worse."

"The new administration I think will" back Republican efforts to reconsider the ESA, said the chairman. He has already met with Trump transition officials to talk about his priorities for the Interior Department, which includes the Fish and Wildlife Service (E&E Daily, Dec. 6).

"But how I work that out is still kind of up in the air," he added.

What are Bishop’s odds?

Experts disagree over the likelihood of his success.

Conservationists plan to battle any attempt by the GOP-controlled Congress or the Trump administration to undo or undermine the law, which they often note has prevented 99 percent of listed species from going extinct.

"We’re bracing for a frontal assault on the Endangered Species Act," said Jamie Rappaport Clark, Defenders of Wildlife’s president and CEO. "At this point, we just need to sleep with our eyes open and see how this plays out."

Bishop would likely need the full support of congressional leaders and the Trump administration to repeal the law, and it’s not yet clear if he’ll get that, according to Rappaport Clark, who served as FWS director during the Clinton administration.

"It takes an awful lot to blow up a law," she said. "You’re going to need somebody pretty sophisticated at Interior to make that happen."

Trump is expected to name his Interior secretary soon.

"We’re certainly going to fight that in the courts and in the streets," Noah Greenwald, the endangered species director at the Center for Biological Diversity, said of any ESA rollback effort. CBD also plans to work with Senate Democrats to beat back bills or amendments that could harm species, he said.

Sen. Tom Carper of Delaware, who will take over the top Democratic spot on the Environment and Public Works Committee in January, told E&E News recently that developing a strategy to defend the ESA "is high on my list when we get settled in."

Some academics who’ve studied the law, however, doubt that Democratic lawmakers or conservationists would be able to stop a concerted effort to kill it in the next session of Congress.

"Maybe the Democrats will filibuster or something, but the votes are there now to just repeal the damn thing — lock, stock and barrel," said Patrick Parenteau, a professor at the Vermont Law School and an expert on the ESA.

Although polling shows the law has broad political support, he argued that could be trumped by economic concerns.

"Does this matter to the out-of-work steelworker in Ohio? No. The coal miner in Kentucky? No. The automaker in Michigan? No," Parenteau said. "Those states that Hillary [Clinton] lost, that’s what matters. And the Democrats know that, now," he said.

"I don’t know what they’re going to do about it," added Parenteau, who served as special counsel to FWS during the Clinton administration. "But they sure as hell aren’t going to bleed and die over the Endangered Species Act, I’ll tell you that. Those days are gone."

Bishop lamented that the Obama administration was not more willing to work with Congress on overhauling the law, under which only 37 protected species have recovered enough that they could be removed from the endangered or threatened species lists. There are currently more than 1,600 listed species in the United States.

At one point, Fish and Wildlife Service Director Dan Ashe — whose agency implements the law along with the National Marine Fisheries Service — expressed some openness to congressional reforms.

"I do believe that the Endangered Species Act should be reauthorized, and I think there could be room for improvement of the law," he said last year at a Senate budget hearing (E&E Daily, May 7, 2015).

But Ashe later walked back that comment and redoubled the agency’s focus on making administrative changes to the ESA (E&E Daily, Oct. 21, 2015).

Ashe is now worried that his successor won’t focus on working within the law to recover protected species.

"It takes effort," he said this week on the sidelines of a wildlife trafficking forum in Washington, D.C. "And I think the concern is that in the coming administration, there won’t be the same level of commitment."

President-elect Trump has offered mixed messages on protecting imperiled species and their habitats.

At a celebratory rally in North Carolina earlier this month, he pledged to honor the conservation legacy of President Theodore Roosevelt, whom he called "one of our great environmentalists" (E&E Daily, Dec. 7).

But his "energy independence" goal could speed habitat destruction and worsen climate change, two of the biggest threats to many rare animals and plants.

"Rather than continuing the current path to undermine and block America’s fossil fuel producers, the Trump Administration will encourage the production of these resources by opening onshore and offshore leasing on federal lands and waters," the president-elect’s only energy policy page says.

His stance on repealing the ESA remains to be seen.