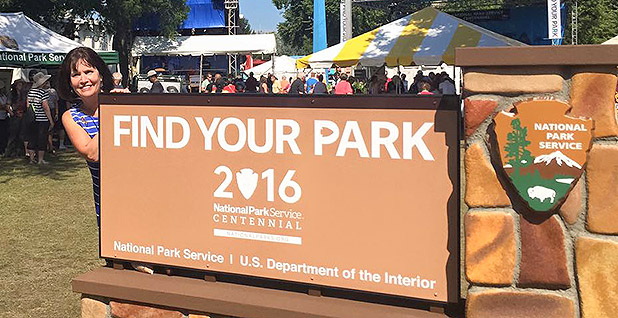 Rep. Betty McCollum (D-Minn.), seen at a Minnesota State Fair exhibit last year, is the top Democrat on the Appropriations subcommittee with jurisdiction over U.S. EPA and Interior Department funding. Photo courtesy of McCollum via Facebook.

Late last fall, Rep. Betty McCollum (D-Minn.) found herself bombarded with climate questions after a town hall meeting in her St. Paul, Minn., district that had focused on health care.

Her Twin Cities constituents were worried about climate change denials coming out of the incoming Trump administration.

The nine-term lawmaker seized on those concerns and in February hosted one of the only congressional town halls in recent memory about global warming. It featured scientists who outlined data linking the Earth’s warming to human activity.

"Climate change is real, humans are major contributors, I am against apathy," said McCollum to cheers from the overflow crowd of more than 500 during the town hall at the University of St. Thomas in St. Paul.

The crowd groaned, and there were even boos, when McCollum mentioned U.S. EPA Administrator Scott Pruitt and his efforts to dismantle one of the Obama administration’s signature environmental efforts, the Clean Power Plan.

"Washington took a major step backward with Pruitt at EPA," she said.

The town hall, which lasted one hour and 15 minutes, amounted to an opening salvo of the campaign McCollum is expected to wage in the coming months over the administration’s push to neuter EPA.

Like many Democrats, McCollum is fiercely opposed to the spending cuts and layoffs for EPA being proposed by the Trump administration. But she is as well-positioned as anyone in her party to fight them as the top Democrat on the House Interior and Environment Appropriations Subcommittee that writes EPA’s annual spending bill.

"She is one of the go-to people in our caucus," said Rep. Joe Crowley (D-N.Y.), the chairman of the House Democratic Caucus. He said her reputation as a serious lawmaker who "does not suffer fools at all" makes it likely that other Democrats will listen to her on budget issues.

McCollum would prefer to increase EPA’s budget, but she knows that has no chance with Republicans controlling both ends of Pennsylvania Avenue.

Instead, she’ll fight Trump’s proposed 31 percent cut for the agency by trying to keep spending at least at the fiscal 2016 spending level of $8.2 billion.

"We are the strongest and greatest country on the planet — we should be moving forward showing leadership on energy and environment issues. But for right now maybe it is making sure we don’t slide backwards, and I am ready to do those battles," the lawmaker told E&E News in a recent interview.

An obvious priority for McCollum will be restoring funding for the Great Lakes Restoration Initiative, which the administration would eliminate by cutting nearly $300 million.

McCollum might have a partner willing to oppose some of the cuts in the Interior panel’s chairman, Rep. Ken Calvert (R-Calif.), who told E&E News last week that he has "issues" with the White House plan and does not expect the 31 percent EPA cut to stand.

"There will be reductions — the difference is how much, how soon and where," said Calvert. He stressed that EPA has already been cut by 21 percent over five years and more than 2,000 jobs have been eliminated, so another round of major cutbacks may not be necessary.

Calvert and McCollum both insist they respect and enjoy working with each other and are cautiously optimistic they can find some common ground on the upcoming spending bill.

"As appropriators we are supposed to go through a negotiation and come to a deal. She is an honorable person to deal with," Calvert added.

McCollum wants to move away from a focus on budget numbers and emphasize the real-word impact of cuts to the regulator. She stresses the proposed cuts would decimate the agency’s ability to enforce the Clean Water Act and Clear Air Act, delay work on brownfield cleanup sites, and lead to more pollutants in the environment, all of which would have a major impact on public health.

Like many Democrats, McCollum tries to counter the argument that overregulation by EPA can be costly by emphasizing how shifting to clean energy jobs can boost the economy. But hailing from a district home to several large mining operations — including 3M Co. — McCollum acknowledges that transition won’t happen instantly and will require additional federal spending.

"If we are going to be a leader in new technology for energy and at the same time reduce climate change, we need to be making the investments," said McCollum, who added she’d like to see a massive federal push akin to the space program in the 1960s for shifting to clean energy.

Additionally, McCollum wants to ensure that reliable scientific data from the federal government, including on climate change, can be easily accessed. She recently introduced a House bill that would prevent the Trump administration from destroying any federal scientific data, a worry of some federal research agencies.

McCollum, who also sits on the House Defense Appropriations Subcommittee, said she is eager to review the Defense Department budget for potential cuts to military efforts to fight global warming or promote clean technologies in weapons like ships and fighter planes.

She said Republicans are less likely to cut funding for those Pentagon climate programs because military leaders have warned that not acting is a risk to national security.

"The Department of Defense calls it sea-level rise, but I can live with that," McCollum said, referring to the Pentagon’s euphemism for global warming that some see as a way around directly mentioning climate change.

McCollum, 62, is a usually reliable liberal Democrat in the tradition of the state’s long-serving Democratic senators and former Vice Presidents Hubert Humphrey and Walter Mondale. She has a 93 percent lifetime score from the League of Conservation Voters, a rating in line with many of the chamber’s more green-minded members.

A part-time teacher and retail manager, she got her start in politics in the 1980s when her daughter was injured on a slide at a playground and the local city council wouldn’t do anything about it. She ran for the council, losing her first race but winning a few years later and then going on to serve six years in the state Legislature before running for an open House seat in 2000.

McCollum prevailed in her first race and has kept on winning with no opponent garnering more than 35 percent against her since her first election to the liberal district, which was once represented by anti-war Democrat Eugene McCarthy. Hillary Clinton carried McCollum’s district with 61.5 percent of the vote.

"She fits her district well, and she can hold it as long as she wants," said Mike Hatch, a former Minnesota attorney general.

One of McCollum’s environmental advisers, John Abraham, a thermal and fluid sciences professor at St. Thomas University who works with other scientists on the Climate Science Rapid Response Team to highlight faulty science, says climate issues play well with voters in her district.

"Minnesotans are better informed about climate change, and what industries are trying to muddy the waters, than most people," said Abraham.

On Capitol Hill, McCollum has been an ally of House Minority Leader Nancy Pelosi (D-Calif.), who rewarded her support with a prized seat on the Appropriations Committee, where she is the only member of her state delegation. She also leads the Congressional Native American Caucus, using her slot on the spending panel to push more spending for Bureau of Indian Affairs programs.

Critics, including her 2016 Republican opponent, accuse her of not being visible enough, but others say that’s unfair and note she’s long been respected in the Democratic caucus. As evidence, they note, she was elected this Congress to serve as one of five regional vice chairmen for the Democratic Congressional Campaign Committee, the campaign arm of House Democrats.

"She is strong and never intimidated; she can get in the ring with the big boys," said former Rep. Jim Moran (D-Va.), who worked closely with McCollum when he headed the Interior and Environment spending panel.

Others note McCollum is unafraid to throw a political elbow, especially on environmental issues.

She recently sent out a press release saying she was "deeply disappointed" with her fellow Minnesota Democratic Rep. Rick Nolan for backing a Trump administration plan for copper mining near a wilderness area in the northern part of the state. She also fought members in her delegation over building a bridge across the St. Croix River, a move also opposed by many in the green community who said it would infringe on long-standing federal environmental protections for the waterway.

McCollum says her interest in the environment began during her childhood in Minnesota, which included early-morning fishing trips with her father and summer drives through the Badlands. She said part of her green philosophy may have been shaped by the "no trace" camping lessons she learned and later taught at summer camps.

"Maybe that’s why I think mining companies should clean up after themselves," she added.