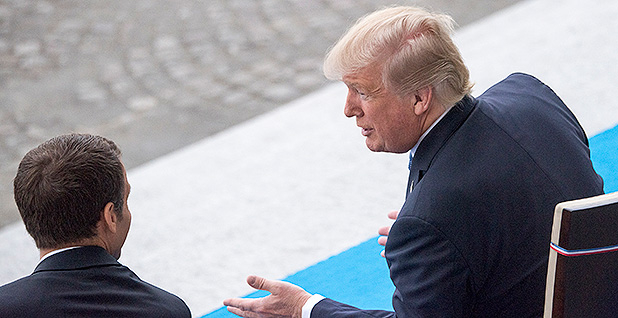 The goal posts for the Paris Agreement have moved.

The world’s top climate scientists this weekend declared that keeping temperature rise to 2 degrees Celsius — 3.6 degrees Fahrenheit — is no longer sufficient. Instead, they said, the globe must prevent warming of 1.5 C above preindustrial levels or abandon billions of people to the social and natural dangers of runaway warming.

The U.N. Intergovernmental Panel on Climate Change, a consortium of experts from 40 countries, authored the report, which incorporated findings from 6,000 scientific studies aimed at assessing the difference between a 1.5 C increase and a 2 C increase.

The difference would be stark. The higher level of warming would come with a damaging 4 inches of additional sea-level rise; Arctic summers without sea ice occurring once a decade instead of once a century; and damage to agriculture, forestry and other economic activities.

In short, the long-term goal enshrined in the 2015 Paris Agreement to keep warming to "well below 2 degrees" isn’t enough anymore.

"I do think the report does really underscore that 2 degrees is nowhere near safe from a climate impacts perspective," said Alden Meyer, strategic director at the Union of Concerned Scientists. "I think it’s fair to say the report [Sunday] indicates how the understanding of climate impacts have evolved over the last 10 years or so."

Small islands and their partners wrung a concession in Paris calling on countries to pursue "efforts to limit the increase to 1.5 degrees." They also succeeded in closing the 2015 summit outside the French capital that produced the Paris Agreement with a decision to ask the IPCC for this report. Two degrees had long been considered the "guardrail" in climate negotiations, defending against the worst impacts of warming, but islands and low-lying countries worried it wouldn’t be enough to save their homelands from sea-level rise.

Sunday’s report from Incheon, South Korea, bore them out, casting 1.5 C as a necessary minimum for action — rather than an aspirational target.

"History will remember this report as the moment the world’s leading experts alerted decision-makers to a fast-closing window of opportunity to avoid catastrophic climate change," wrote environment ministers from 11 countries that remain members of the High Ambition Coalition to Paris, including the Marshall Islands, Vanuatu and St. Lucia. The United States was formerly a member under President Obama, but President Trump has announced plans to walk away from the Paris deal.

Tommy Remengesau, president of Palau, said it would be good if the report made more people "angry" about the impacts fossil fuels have on vulnerable populations. But he said the science isn’t new.

"If this report is what finally gets you to join our side, then welcome!" he said in a text to E&E News. "We have a big fight ahead of us and the stakes could not be higher. I hope you have a strong stomach and an even stronger backbone."

The report promised islands that keeping warming to 1.5 C would afford them "greater opportunities for adaptation including managing and restoring natural coastal ecosystems, and infrastructure reinforcement."

For high-altitude tundra and boreal forests, the tougher temperature threshold would defend against permafrost thaw, which would not only degrade the local environment but also release methane, compounding climate change.

Durwood Zaelke, president of the Institute for Governance & Sustainable Development in Washington, D.C., and an expert reviewer of the report, said last week he was concerned that the report wouldn’t do enough to emphasize the danger of these self-reinforcing feedback loops — the loss of reflectivity from retreating sea ice is another — that could counteract efforts to stabilize the climate.

The summary for policymakers released yesterday noted that, in the long run, humans would need to take more emissions out of the atmosphere than they put in to interrupt Earth system feedbacks that would otherwise keep warming the planet, even after carbon neutrality had been achieved.

Sunday’s report is intended to inform the future of the Paris deal. Far from limiting warming to 1.5 C, the collective national commitments to Paris would allow temperatures to rise almost 3 C — even if countries stuck to their pledges.

But the deal provides for re-evaluation of those commitments along a five-year cycle, starting with a review known as the Talanoa Dialogue to be held this year at climate talks in Katowice, Poland. The session encourages countries to share best practices and start thinking about the next round of pledges to be offered by 2020.

"That’s clearly one of the inputs that we have to take on board, and we’re really looking to that to inform the discussions," he said, adding that he hoped it would ease ongoing discussions about guidelines for how the Paris deal will be implemented. The Paris rulebook is due to be completed at the end of this year, and progress has sometimes lagged.

The report is also timed to provide pressure ahead of a meeting next September in New York hosted by U.N. Secretary-General António Guterres, who has asked countries to come prepared to debut their 2030 Paris targets. The report demands that the world cut emissions 45 percent by 2030 to make 1.5 C possible, with carbon neutrality following 20 years later.

The next round of targets would need to cut global emissions nearly in half to stay in line with this report.

The European Union is considered a leader in the U.N. climate process, especially since Trump’s decision to pull the United States out. The 27-nation compact is preparing to release a long-term strategy to reduce its emissions next month.

Climate change commissioner Miguel Arias Cañete and science commissioner Carlos Moedas noted European financial backing for the IPCC work and affirmed its finding that the 1.5 C limit is "necessary to avoid the worst impacts and reduce the likelihood of extreme weather events."

The compact, they said, would "work to address those challenges and expects others to follow."

But the report also came the same day a draft European 2050 strategy leaked to the media and showed that European emissions wouldn’t zero out until 2070, or 20 years after the IPCC report says that emissions from the world as a whole must drop to zero.

"The strategy in its current shape is far off track to achieve 1.5°C," Wendel Trio, director of Climate Action Network Europe, said in a statement. "It is in a stark contrast with the urgency of action enshrined in the new IPCC report released today."

The U.S. State Department released a statement distancing itself from the scientific findings of the IPCC. But behind the scenes in Incheon, U.S. career officials are said to have played a constructive role, while Saudi Arabia requested the most edits to the draft in an apparent effort to grind progress to a halt.

In the end, China has been credited for helping persuade Saudi Arabia to let the process move forward.