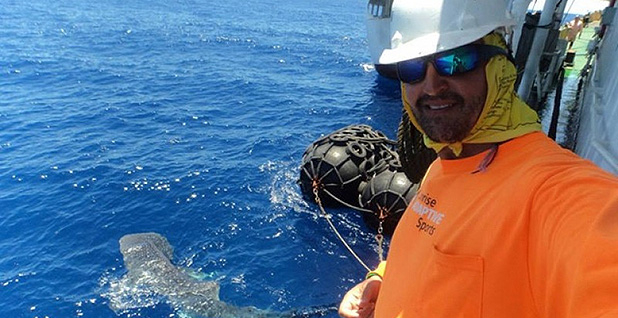 Keith Davis was an observer for the Inter-American Tropical Tuna Commission who disappeared in 2015. Disappearance of Keith Davis/Go Fund Me

A review team today released a long-awaited report that criticizes NOAA Fisheries for not doing enough to investigate the unusual deaths of three fisheries observers, saying in one case there had been "an information vacuum."

While all three observers were lost in the line of duty, the causes of their deaths remain inconclusive, and the agency should have done more with other federal agencies to determine what went wrong, the 545-page report concluded.

"While aware that NOAA Fisheries is not an investigative agency, and that jurisdictional and geographical issues were very complex in two of the three cases, the review team believes that more could have been done in cooperation with other agencies involved to pursue more comprehensive and transparent closure of these tragic incidents," the report said.

Members of an external review team that conducted the study found during field visits that many observers were not even aware that three of their colleagues had died in a single year.

"It remains troubling that three observers … were lost in the line of duty over the space of a year, yet there has to date been no official closure or systematic analysis of lessons learned with respect to any of them," the report said.

The observers are assigned to fishing vessels, collecting data and making sure fishermen follow federal rules. NOAA has roughly 900 observers and at-sea monitors, who have college degrees and are professionally trained.

The report said NOAA’s safety record has been "generally good" with observers, with six work-related fatalities over a 40-year period.

But in late 2016, NOAA Fisheries’ Office of Science and Technology ordered a review after the "highly unusual loss" of three observers over a one-year period. A four-member external team was formed to conduct the review.

One of the victims, Keith Davis, 41, from Arizona, disappeared on a fishing vessel off the west coast of South America.

Two of the deaths "appear to have stemmed from natural causes," the report said, yet questions remain about the communications, protocols and actions taken in response to them.

John Ewald, a spokesman for NOAA Fisheries, said this morning that the agency "is deeply saddened by the tragedies, which is one of the reasons we commissioned this important report."

He added, "Fishing is one of the most dangerous professions in the world, and we take observer safety very seriously, not only in our U.S. domestic programs but also observer programs managed under international organizations. We are developing an action plan based on the findings and recommendations of this report and will report on our progress publicly."

The review team recommended that the agency make it "a high priority" to "develop and maintain a robust, timely and transparent process" for reporting all serious incidents.

"Particularly in cases of incidents involving serious injury or death of an observer, the agency should ensure that all necessary resources are brought to bear so that the root causes can be identified, appropriate actions can be taken to prevent or mitigate the consequences of a recurrence, and lessons learned can be applied to future safety training and policy development," the report said.

It added, "In cases where NOAA Fisheries does not possess the necessary investigative authority, resources, or jurisdiction, the agency should identify and seek support and expertise of other agencies who do, at as high a level as necessary to break any administrative logjams."

The report also suggested that NOAA develop a national policy to ensure that observers are not being deployed on fishing vessels infested with bed bugs.

For example, the report said, the Pacific Islands regional observer program had 41 bed bug infestations in 2016. It said bed bugs pose serious safety threats to observers, due to loss of sleep and fatigue and the potential of spreading infections from open sores.

As part of its work, the review team traveled to the Western Pacific, the Bering Sea and Aleutian Islands, the Gulf of Mexico and New England.