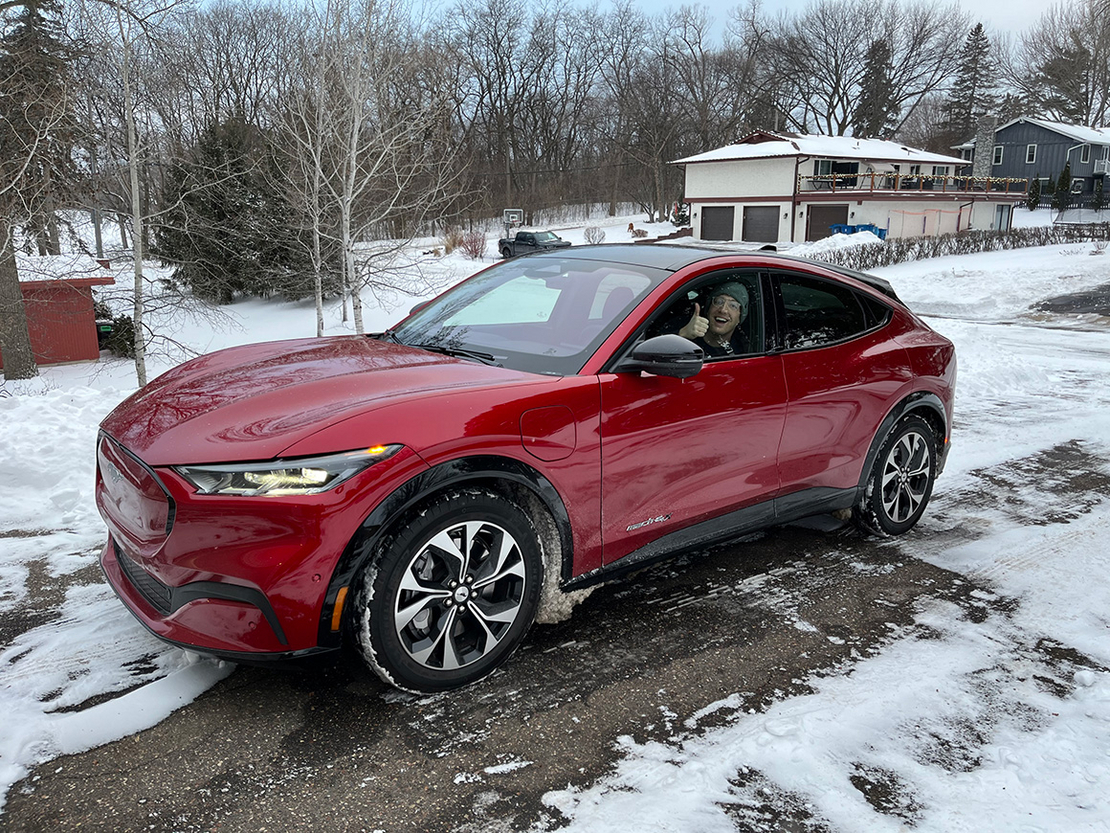 Reporter Alex Lauer sat in an electric car for 12 hours to disprove critics who claimed that gasoline cars are better for motorists who are stranded in winter. Alex Lauer

When traffic came to a 48-mile wintry standstill on Interstate 95 in Virginia earlier this month, the internet was abuzz with conjecture about how drivers, many of whom were trapped for more than 24 hours, would have fared in electric vehicles.

That is certainly the case for older models like the Toyota RAV4, which gets about 100 miles per charge, but what about newer models with improved battery capacity, hundreds of miles of range and cold-weather packages? How would the advanced technological models of today’s EV market fare?

Lauer, a senior editor at InsideHook, an online publication geared toward affluent men, called up Ford Motor Co. and asked if he could borrow an electric vehicle to idle in his driveway for 12 hours. Lauer lives in Minnesota, where the punishing winter weather offers a fair comparison to the recent Virginia freeze.

“I hadn’t really seen any tests like that out there,” Lauer told E&E News. “And so I figured, I’m in touch with all these automakers, I can reach out to one and see if they could loan me an EV, and I could just do the test myself.”

Ford sent over a Mustang Mach-E, the company’s electric version of the world’s best-selling sports car. As Lauer wrote in an article about his EV test, he got in the car at 5:45 a.m. local time.

The charge read 100 percent with only 186 miles of range. While the Mustang Mach-E boasts an almost 300-mile range, this model was a preproduction unit without all the software updates, hence the lower range on full charge, Lauer explained.

In order to simulate getting on the highway, Lauer drove to a Starbucks and back. Then, he sat in his car for 12 hours. He had to stay inside the car to make sure the cabin stayed warm enough to maintain passenger safety in freezing weather.

“So I drank that [coffee], listened to the radio,” he said. “I’m reading this book series, “The Wheel of Time,” and I’m on book 12 out of 14, so I was reading that. And then I just worked on another story for InsideHook.”

Altogether, Lauer lost 25 percent of his range over 12 hours while keeping the car warm. It stands to reason, he said, that 24 hours would have meant losing just 50 percent of his battery charge. That means a hypothetical Mustang Mach-E driver who got stuck on the I-95 backup this month, likely would have fared just fine.

Lauer notes he is not a scientist and there are numerous factors he couldn’t control for. For example, he had seat warmers, and so used less direct heat, which may have conserved battery power. He also began his driveway journey with a full charge. But he says, all told, he would feel pretty secure driving a new EV model in frigid weather during a traffic jam.

“I would feel confident for sure,” he said. “With EVs, there’s just so many misconceptions about how they perform. As someone who has looked into this and is confident in modern electric vehicles, this did give me even more confidence in them.”

Still, he said for those who are determined to despise electric vehicles, it’s hard to convince them otherwise.

“Whenever you write something positive about electric cars, you definitely get a lot of hate mail,” he said.

Lauer said he understands that people are scared of new technology. But he hopes drivers eventually will overcome that fear when the potential benefits are manifold.

Transportation is the single largest source of greenhouse gas emissions in the country with passenger cars spewing the bulk of that heat-trapping pollution. According to the International Energy Agency, the sale of traditional gasoline- and diesel-powered cars would need to end by 2035 to stave off catastrophic warming.

“I just don’t want people to be irrationally scared of new technology, especially technology that has the potential to drastically decrease carbon emissions and air pollution,” Lauer said.