Reports of the Green Party’s death were exaggerated 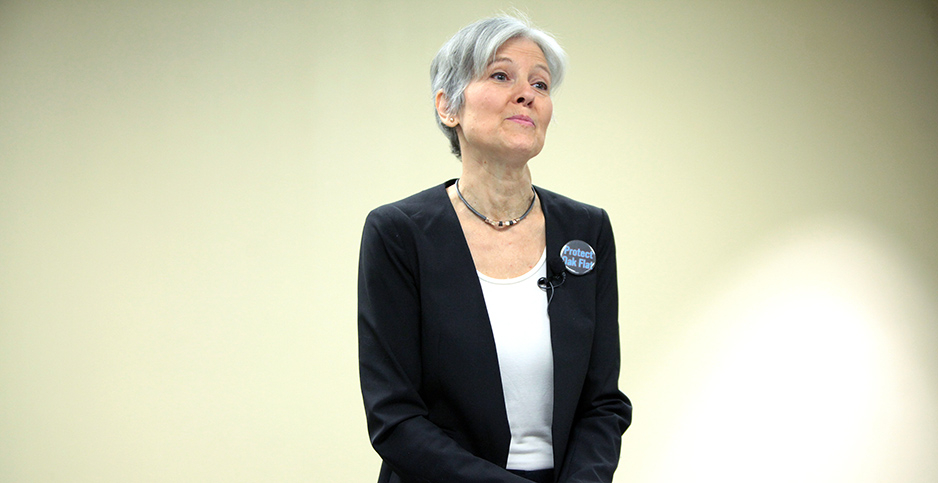 Jill Stein is the nominal leader of the Green Party, whose ideas have been adopted by liberal Democrats. Gage Skidmore/Flickr

The Green Party — an also-ran in national elections — is showing some life these days on Capitol Hill.

While the push is associated with Rep.-elect Alexandria Ocasio-Cortez (D-N.Y.) and the youth-driven Sunrise Movement, the plan is actually one that the Green Party has been promoting for more than a decade (Climatewire, Dec. 4).

Then there’s the Arizona Senate race won by Democrat Kyrsten Sinema over Republican Martha McSally. When the Green Party candidate realized she could draw votes from Sinema, she dropped out and threw her support to the Democrat, who had pledged to protect Arizona’s public lands.

Taken together, these developments show the Green Party’s unique space in the political ecosystem. With no realistic shot at electing its candidates, the party can incubate policy ideas and influence the outcomes of some national races.

"If you look at polls of Americans, the majority … believe in global warming and think something should be done," said Per Urlaub, a linguistics professor at Middlebury College who has studied the Green Party in both the United States and his native country of Germany. "However, it doesn’t translate into votes for the Green Party because of the electoral system in the United States."

He added, "Unless there is a complete revolution and overhaul of the electoral system … meaningful environmental legislation can basically only happen in one of the two big parties, and it’s more likely that the Democratic Party would be that party."

"The Green New Deal will convert the decaying fossil fuel economy into a new, green economy that is environmentally sustainable, economically secure and socially just," Stein pledged on her website.

Now it’s Ocasio-Cortez and the grassroots Sunrise Movement that are using the Green New Deal to make waves on Capitol Hill. The incoming chairman of the House Rules Committee, Rep. Jim McGovern (D-Mass.), threw his support to the movement this week (E&E News PM, Dec. 10).

But Green Party members aren’t celebrating. Rather than commending Democrats for embracing the Green New Deal, they’re wary of their plan being diluted.

"When you are part of a corporate party, there will be restrictions and a lot of pressure to compromise or even change positions," said Gloria Mattera, co-chair of the Green Party of the United States.

"I mean, I think we saw that with Alexandria Ocasio-Cortez and the back-and-forth with supporting [Nancy] Pelosi as speaker. We’re an independent party."

There are significant differences between what the Green Party initially envisioned and what Democrats are proposing now, Mattera said.

For instance, the Green Party emphasized slashing the U.S. military budget to help pay for a green energy push. The Democrats have been vague on the question of pay-fors, she said.

"We are very up front and center to say the bloated military budget would be significantly slashed if we were in government," Mattera said. "And that would definitely pay for what’s an emergency at home. But there’s not a lot of information in the proposal from Ocasio-Cortez about how to pay for it, except things like innovative public and private ventures."

Andrew Stewart, a member of the Youth Caucus of the Green Party, noted that President Trump has requested that 61 percent of the federal budget in fiscal 2019 be spent on the military.

"The military is a metastasizing, growing element of the budget that makes things like the Green New Deal fundamentally impossible to happen," Stewart said. "You can’t really do the large social welfare spending unless you go after one major element that’s eating up all that space."

According to Ocasio-Cortez’s proposal, "financing of the Plan shall be accomplished by the federal government, using a combination of the Federal Reserve, a new public bank or system of regional and specialized public banks, public venture funds and such other vehicles or structures that the select committee deems appropriate."

‘This is for the people’

When Angela Green decided to enter the Arizona Senate race, she did so — fittingly, given her last name — as a member of the Green Party.

"The seat was open, and I had been a Democrat my whole life," Green said in an interview. "But I knew that I didn’t have a chance of running against Kyrsten Sinema in the primaries. So I felt that the best way for me to get on the ballot was to run as a Green Party candidate. And I believed in a lot of their policies."

Green said she felt energized when she started campaigning. She was especially looking forward to outlining her priorities during a nationally televised debate. So it came as a shock when she didn’t receive an invitation.

"It was very frustrating when I didn’t get invited [to the debate]," Green said. "I thought, ‘OK, that’s fine. If I’m not going to receive an invite, I’ll just go.’ So I showed up, and then they escorted me out."

"It was a travesty. We deserve a democracy. That’s what our country is built on," she said. "And I felt that that was taken from me. And it was taken not just from me, but everyone in Arizona who deserves a third-party candidate."

Green dropped out of the race and urged supporters to vote for Sinema instead. She said she felt "overwhelmed" by the allegations that she was tilting the race in favor of McSally.

Sinema, who herself was once a Green Party activist before becoming a moderate Democrat, ultimately pulled off a narrow victory. Her win split national green groups, given her mixed track record on environmental issues.

The League of Conservation Voters heralded Sinema’s victory, noting her opposition to uranium mining near the Grand Canyon. But the Sierra Club stayed out of the race, pointing to her vote to scrap Obama-era Bureau of Land Management guidance (Greenwire, Nov. 2).

"This was a situation where the Green Party candidate saw what was happening and wanted to get the Democrat elected," Noel said.

Noel noted that when Ralph Nader ran for president on the Green Party ticket in 2000, he faced similar allegations of "spoiling" the election for Democratic nominee Al Gore. The conventional wisdom was that Nader cost Gore the states of Florida and New Jersey, cementing the victory of Republican George W. Bush. It’s less clear that Stein "stole" votes from Democratic nominee Hillary Clinton in 2016, cementing Trump’s victory, he said.

Green said she intends to run for Congress again. When asked whether she would consider running on the Green Party ticket, she laughed before pausing to reflect.

"It’s possible that I might have to pick one of the major parties," she said. "We’ve got to make our voices heard. If the Green New Deal is being seized by the Democrats, unfortunately the Green Party might have just slept on it a little too long."

She added: "I’m not saying, ‘Hey, jump ship and everybody become a Democrat because of this.’ But with the Green New Deal, this is for the people. I want to see my children, my grandchildren have a better world. Whichever party is going to take us to the next level, that’s the party we should be a part of."