Republican bets his seat on climate bill. Will it work? 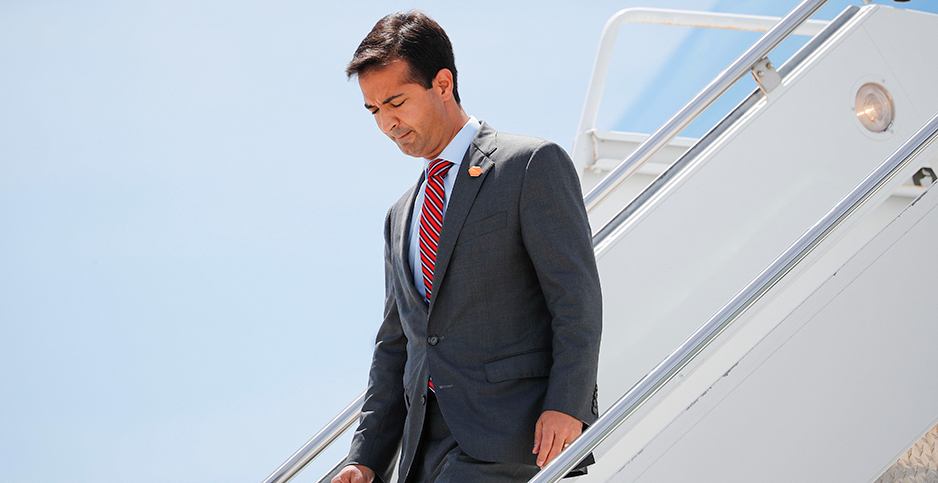 Florida Rep. Carlos Curbelo has a plan to help save the world — and, as a bonus, maybe his own political career.

The two-term Republican unveiled a proposal yesterday that would fight global warming with a sweeping change to U.S. policy that includes the elimination of the federal gas tax and the creation of a $24-per-ton levy on carbon emissions (Greenwire, July 23).

The bill has almost no chance of passage in the short term, but its introduction has elicited a broad variety of responses — from environmentalist support to conservative criticism to Democratic attacks that labeled it an election ploy.

Curbelo, for his part, has focused on the local impact.

The GOP lawmaker represents Florida’s 26th District, which includes both the Everglades and the Florida Keys: two ecologically sensitive areas where the effects of climate change are more than just theoretical.

"Already my constituents in South Florida are experiencing the effects of higher sea levels with chronic coastal flooding and saltwater intrusion in the Everglades, which threatens our drinking water supply," Curbelo said.

Curbelo’s district backed Hillary Clinton over Donald Trump by 16 percentage points in the 2016 presidential election, and Wagner said Curbelo has plenty to gain by paying attention to Democratic priorities.

"He is going to have to appeal to those voters, and climate change has been a bigger issue for Democrats than Republicans," Wagner said.

A poll conducted by FAU last fall found that among the 500 registered Florida voters it surveyed, nearly 56 percent believed that climate change was contributing to the strength and frequency of hurricanes. More than 76 percent said they were "very concerned" or "somewhat concerned" about the state of the environment nationwide.

Still, Wagner cautioned that it’s one thing to be concerned and another to vote on that issue. A separate FAU poll from May found that Florida voters listed immigration and health care as their top concerns.

Still, Wagner said that a widespread — and highly publicized — algae outbreak in Florida has "created a lot more attention toward environmental policy than is [normally] seen in an election year."

Curbelo’s recent moves on carbon taxes have attracted some notice — though maybe not in a way he would like.

Democrat Debbie Mucarsel-Powell, who is running against the Republican incumbent, recently took aim at his environmental positions.

In a series of Twitter posts, she dismissed Curbelo as an empty suit — specifically pointing to his leadership of the bipartisan Climate Solutions Caucus, which Curbelo co-founded with Rep. Ted Deutch (D-Fla.).

The group has accomplished little legislatively, and most of its Republican members voted last week in support of a resolution that dismissed carbon taxes — the very policy Curbelo unveiled yesterday — as "detrimental" to the U.S. economy.

Curbelo said yesterday that he had attracted at least one Republican co-sponsor for his bill: Rep. Brian Fitzpatrick of Pennsylvania.

But getting carbon tax legislation through the GOP-controlled House appears nearly impossible this year, given that last week’s resolution against the policy passed 229-180, with just six Republicans in opposition — including Curbelo and Fitzpatrick (Greenwire, July 19).

Even so, Curbelo did garner some accolades from the environmental community for the effort.

"The National Wildlife Federation applauds Rep. Curbelo’s bold leadership of putting forth a climate plan that harnesses market forces to reduce carbon pollution and increase investments in clean energy," Collin O’Mara, its president and CEO, said in a statement.

Curbelo, perhaps sensing his own limitations, set a timeline for carbon taxes that went beyond this year.

"I truly believe that one day this bill, or legislation similar to it, will become law," he said. "We simply owe it to every American — and especially younger generations who are understandably concerned about the future."