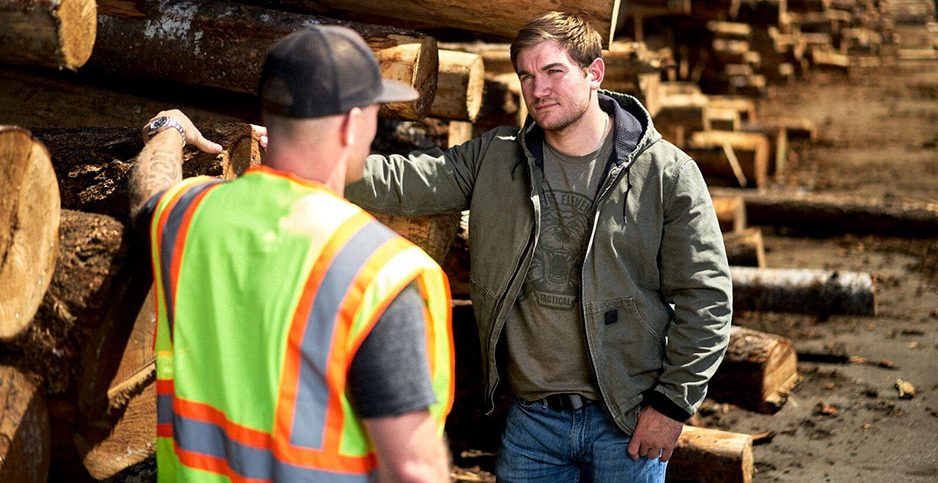 The timber industry is a focus of Oregon Republican Alek Skarlatos' race for Congress. Skarlatos/Facebook

A Republican who made his name fighting a suspected terrorist in France thinks he can unseat longtime incumbent Democratic Rep. Peter DeFazio in southwest Oregon by channeling decades of rural anger over the decline of the timber industry.

Alek Skarlatos, 27, is best known worldwide for a 2015 incident, when he was an Army National Guardsman, in which he and other men stopped a gunman on a Paris-bound train from carrying an attack.

He later received top awards from the United States and France, depicted himself in the Clint Eastwood-directed film "The 15:17 to Paris," and competed on the show "Dancing With the Stars."

But while the train attack propelled him to fame, the long downfall of timber in the southwest Oregon area he calls home is what pushed him into politics, first in an unsuccessful 2018 campaign for Douglas County commissioner and now to represent the 4th District in Congress.

“Small towns all across the district are, for lack of a better word, just drug dens at this point.”

"Small towns all across the district are, for lack of a better word, just drug dens at this point. There’s no industry whatsoever, and there’s no replacement for the timber industry in southwestern Oregon."

DeFazio, who first came to office in 1987, has "really overseen the downfall of the timber industry and has done nothing to help us," Skarlatos said. "He hasn’t brought in any replacement industry to replace timber. He hasn’t even tried to manage our forests properly."

The problems with the timber industry go back more than 80 years, Skarlatos said. The Oregon and California Revested Lands Sustained Yield Management Act of 1937 set aside much of the federally owned land in the area for timber harvesting.

Then, in 1990, the Fish and Wildlife Service listed the northern spotted owl as a threatened species under the Endangered Species Act and at the same time reduced the logging of old-growth forests the owl needs for habitat.

These actions ultimately clashed with the Northwest Forest Plan put in place by the Clinton administration, he said.

Skarlatos claimed the science on the spotted owl was wrong and that logging didn’t turn out to be a threat to it.

Scientists have found that the invasive barred owl is also a threat but that the spotted owl still needs old-growth forest habitat to survive.

Skarlatos said he doesn’t want to roll back the Endangered Species Act. But if elected, he would push to increase logging in the area.

"I would like to see a compromise so that the Endangered Species Act doesn’t step on anyone’s toes when it comes to old agreements made between counties and the federal government," he said.

Skarlatos also floated giving the federal land to state, county or private ownership. "We gave up control of the land to the federal government," he said. "I think that was our first mistake."

Human-caused climate change ‘up for debate’

DeFazio was also an early supporter of the Green New Deal, which Skarlatos criticized as overly burdensome, particularly when he believes better forest management could significantly reduce emissions from forest fires.

Skarlatos said he believes in climate change, but "whether humans are doing enough to contribute to the causes of it, that’s still up for debate."

Skarlatos’ challenge could amount to DeFazio’s biggest election threat since arriving in Congress. The chairman of the Transportation and Infrastructure Committee and co-founder of the Congressional Progressive Caucus has frequently won with comfortable margins.

But Democrat Hillary Clinton won the 4th District in the 2016 presidential election by a minuscule 0.1 percentage point.

Skarlatos thinks he has a good chance of winning, and if the district’s two major universities — the University of Oregon and Oregon State University — don’t bring back all of their students for the fall semester due to COVID-19, it could reduce Democratic turnout.

‘No plan and no experience’

The Democrat has sought multiple times to pass legislation to increase harvest volumes while protecting species, coming closest to passage in 2018, she said.

"Oregon’s rural communities need and deserve far more assistance, which is why Congressman DeFazio is focused on expanding economic opportunity in rural Oregon that will revitalize the job market," she said.

"While Alek Skarlatos claims that he could single-handedly bring back historic harvest levels, the reality is that he has no plan and no experience to do so," said Gabrielson.

"DeFazio supports responsible forest management while ensuring protection of critical habitat and old growth. It does not have to be either-or," she added.

DeFazio’s campaign has been critical of Skarlatos’ other views and associations, including his criticism of the shutdowns and social distancing meant to fight COVID-19.

The campaign also points to his associations with Timber Unity, a group that fights environmental policies and helped push Republicans in Oregon’s Legislature to walk out twice in an effort to thwart climate change legislation.

Skarlatos says he supports Timber Unity and spoke at a rally it organized at the state Capitol in Salem. He’s also a staunch ally to President Trump.

Brent Steel, a public policy professor at Oregon State University, said DeFazio might be at slightly more risk this year than he has been in the past, but Skarlatos is unlikely to win.

"I think he could make it close," Steel said of Skarlatos. "But DeFazio has been a very good representative for the district."

Steel said DeFazio has defended the timber sector and industries that depend on it, including the mills.

"It’s a big part of the economy," he said. "You cannot be against the timber industry and get elected in that district. DeFazio has done a good job of balancing that against the environmental concerns."

If Skarlatos got to Congress, he likely wouldn’t be able to do much to boost the timber industry.

Norm Johnson, a forestry professor emeritus at Oregon State, said officials have tried in the past, particularly during President George W. Bush’s administration, to make changes to the Northwest Forest Plan, but they haven’t been able to pass court muster.

"The administration could never make a good case for why it wanted to change the policies. They just blunted their pick for years and didn’t have much effect," Johnson said, pointing to the difficult structure of policies, regulations and laws including the Endangered Species Act and the 1937 land bill.

"This is in a legal framework that’s pretty difficult to push around," said Johnson.

More recently, the U.S. District Court for the District of Columbia ruled last year that the timber harvest constraints put in place under the plan are not legal.

Judge Richard Leon has yet to rule on the remedy that should follow from his ruling, but it might give federal officials in the Bureau of Land Management and other agencies more flexibility.

"It would make the management of those lands much more responsive to the political administrations in power," Johnson said, though the authority would largely rest with the president, not Congress.