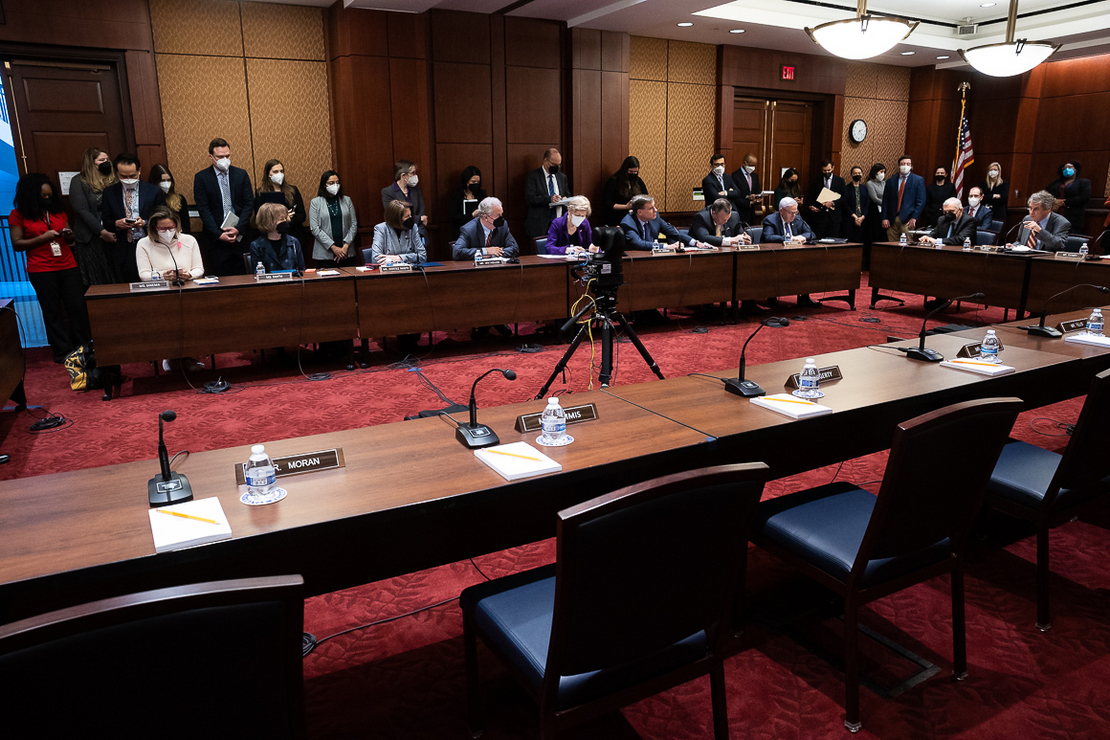 Democrats are fuming after Republicans blocked Sarah Bloom Raskin’s nomination in committee yesterday, complicating their efforts to push the pro-climate Federal Reserve pick through the Senate.

The GOP bailed on a scheduled markup in the Banking, Housing and Urban Affairs Committee on Raskin, Fed Chair Jerome Powell and vice chair pick Lael Brainard, among several other nominations from the Biden administration. The panel couldn’t establish a quorum and was unable to send the nominations to the full Senate (E&E News PM, Feb. 15).

At issue are ethical questions raised by Republicans about Raskin’s time working in the private sector, as well as her views on climate risk in the financial sector, which Republicans believe to be extreme.

The confirmation process devolved into a partisan brawl yesterday, with competing floor speeches, input from the White House and accusations of a GOP “smear campaign.”

Democrats said Republicans were shirking their duty in not attending the vote, and the White House raised questions about Republicans’ commitment to fighting inflation.

“Republicans are out there saying, ‘Inflation is a problem. It’s a huge issue.’ We agree,” press secretary Jen Psaki told reporters yesterday. “And then they’re not even bothering to show up to even vote against these nominees to the Federal Reserve. What message is that sending to the American public?”

Raskin, a former deputy Treasury secretary and Fed governor, has been outspoken about the need for financial regulators to address risks from intensifying climate-related disasters and stranded fossil fuel assets as the economy moves toward clean energy.

If confirmed to be vice chair for supervision, she would have a crucial role in determining how the Fed regulates banks and handles climate risk.

“It’s clear Republicans don’t want her. She has been too strong standing up to Wall Street, too strong speaking out about climate and the role the Federal Reserve has in assessing risk based on climate in lending decisions of the Fed,” Banking Chair Sherrod Brown (D-Ohio) said on the floor yesterday. “She’s not allocating credit or telling banks whom to lend to. She’s just saying we should assess risk.”

Republicans picked apart Raskin’s climate views during her confirmation hearing earlier this month, arguing that she would politicize the Fed and force financial institutions to move away from fossil fuels.

Raskin rejected those attacks, saying that she would operate by the long-standing central bank view that “banks chose their borrowers, not the Fed” (E&E Daily, Feb. 4).

Psaki called Raskin “one of the most qualified individuals to ever be nominated to the Federal Reserve,” but Republicans repeatedly dialed in on her past climate comments yesterday.

“She’s written articles right up through last year where she has specifically and forcefully advocated that we use the supervisory powers of the Fed, which are enormous, to steer capital away from fossil fuel, energy companies, and steer it toward politically favored industries,” Banking ranking member Pat Toomey (R-Pa.) said on the floor yesterday. “So in other words, turn the Fed into a body that allocates capital.”

The center of the controversy, however, is GOP allegations that Raskin used connections to secure a special central bank “master account” for Reserve Trust, a small financial technology company, during her time there. The account allows access to Fed payment systems. The company says it is “the first fintech trust company with a Federal Reserve master account.”

In a series of letters this month, Toomey accused Fed governors and the Federal Reserve Bank of Kansas City, which was involved in providing the account, of stonewalling his requests for information. He has also said Raskin provided insufficient answers in her responses to questions for the record.

Raskin has denied impropriety. The Kansas City Fed said in a statement last week that Reserve Trust was given a master account in 2018 after changing its business model and “following a review of other risk-based factors relevant to the decision.”

“She’s told us she doesn’t recall whether or why it was important to Reserve Trust to get the master account,” Toomey said on the floor. “That’s funny. Seems like it was the most important thing to that company.”

The reason for the Republican blockade, Toomey said, is that “she has refused to answer very fundamental questions.” Committees are evenly divided in the 50-50 Senate, which means Republicans can deny a quorum and prevent a vote if they refuse to show. The Senate would have to change its rules to advance the nomination if Republicans continue the blockade.

But Toomey suggested Republicans might be willing to move ahead with a vote should they “get some answers.”

“This is the only recourse we have when we’re getting stonewalled,” Toomey said.

It’s not clear exactly how Democrats plan to resolve the situation.

Toomey offered to move the other five nominees initially scheduled for a vote yesterday without Raskin. He accused Democrats of trying to get a “climate warrior” into a top role at the Fed.

“Getting her there must be the most important thing,” Toomey said. “In fact, it must be more important than getting all five of the other people confirmed because that’s the decision that they made today.”

But Brown rejected an approach that would separate Raskin from the other nominees.

“If you start breaking them up … Sen. Toomey then can decide who even should come to a vote,” Brown told reporters.

The other picks are less controversial, and Powell would almost certainly be confirmed in committee and in the full Senate by a wide bipartisan margin.

Asked whether the White House would support a legislative maneuver to potentially skip the committee process and bring Raskin straight to the floor, Psaki said “our focus right now is on working with Chairman Brown on moving these nominees through the committee.”

Either way, Raskin could face a tough vote with Democratic moderates on the floor in the 50-50 Senate. In an unofficial vote during the markup, however, committee Democrats unanimously said they would vote to confirm Raskin.

Brown said he would expect her to get 50 Democratic votes in the full Senate when she comes to the floor.

“Sen. Toomey and some in his party don’t like the answers. They don’t like her answers on climate,” Brown said. “This is character assassination when it comes to ethics. They know better.”