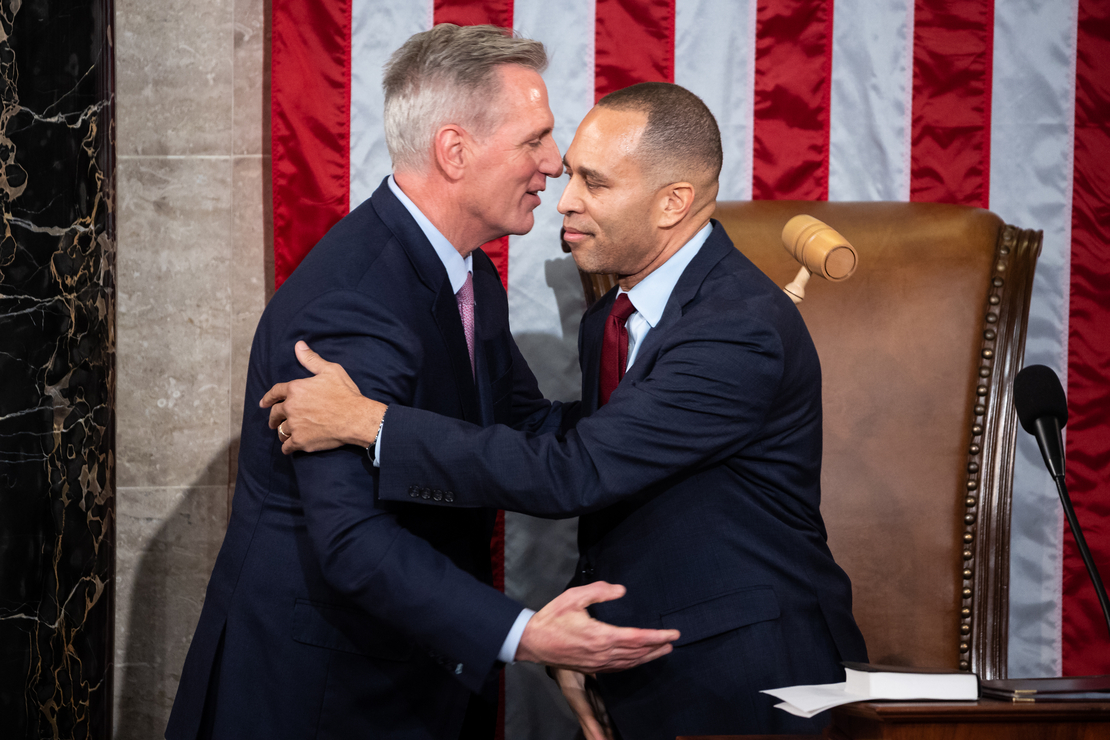 The first week of Republican House control has raised concerns about how Congress will deal with key matters, including raising the debt ceiling and passing government spending bills. But lawmakers have a longer list of policy items on its to-do list that could be just as thorny.

House Speaker Kevin McCarthy (R-Calif.) secured enough Republican support to earn the gavel, but reaching that long-sought goal required a series of concessions to some of the most extreme members of his caucus.

Democrats say the turbulent events last week should serve as a warning sign.

“I’m very, very troubled by the way in which the Congress has started and hopefully that does not portend what’s to come,” House Minority Leader Hakeem Jeffries (D-N.Y.) said Sunday on NBC’s “Meet the Press.”

Jeffries pointed to upcoming efforts such as the farm bill and other agency reauthorizations.

Republicans have said the past week was an example of democracy at work.

“There was a lot of was a lot of frustration with the prolonged and unnecessary food fight that we had this week,” Rep. Nancy Mace (R-S.C.) on CBS’ “Face the Nation.” “But you saw democracy on full display. And I think that’s healthy to have that kind of debate. I’m glad that it’s over and we can move forward.”

Here’s a look at a series of bills outside government spending that Congress will need to address this year:

A big focus for Congress in 2023 will be finding a path forward for a farm bill.

Congress has authorized the five-year bill since the 1930s. It includes a host of farm, nutrition and rural programs that expire at the end of September.

Because of the wide-reaching impacts of the legislation, energy, climate and environmental priorities are sure to make an appearance. Lawmakers have already set a baseline for the bill as part of last month’s omnibus spending package (E&E Daily, Jan. 5).

Crop and disaster insurance is likely a flashpoint this go-around as members look to better prepare the federal government to respond to increasing extreme weather and its impacts on rural lands.

Democrats have also looked to bolster climate mitigation policies. Republicans have looked to promote additional tree planting as a way to suck carbon from the atmosphere. Both policy areas could see inclusion in the bill this year.

Fiscal 2023 is the last year with congressional authorization for the Transportation Department’s Pipeline and Hazardous Materials Safety Administration (PHMSA), the nation’s pipeline regulator.

That legislation included mandates for adoption of new pipeline monitoring technology as well as requirements to help reduce methane leaks from fossil fuel infrastructure. Lawmakers have complained at the pace of the legislation’s implementation.

Recent pipeline debates have centered on public safety and spills, and those issues are sure to be prominent in the latest reauthorization because of the high-profile oil spill from the Keystone pipeline.

Lawmakers may look to attach provisions related to the regulation and oversight of pipelines set to move carbon dioxide. Projects to move CO2 from energy generation, biofuel refining and oil and gas operations have generated attention as the world looks to trap greenhouse gases.

Also set to expire at the end of fiscal 2023 is the authorization for the Federal Aviation Administration.

Congress in 2018 passed a five-year reauthorization of the agency responsible for overseeing the nation’s flight regulations after years of short-term extensions. The legislation was one of the few bipartisan accomplishments during the first two years of the Trump administration.

Following a holiday season during which Southwest Airlines — and administration officials — generated negative headlines for travel chaos, lawmakers will have the potential to focus on customer service policies.

Not usually seen as an avenue for energy and environment policy, the FAA legislation has the potential to take on a climate bent this time around as Democrats look for back door channels to advance policies against global warming.

Aircraft emissions represent roughly 9 percent of greenhouse gas releases from the transportation sector. Lawmakers have been looking to promote alternative fuels in addition to more electrification research and development.

The FAA, for its part, announced a proposed rule this summer that would direct new aircraft coming online after 2028 to meet climate-friendly efficiency requirements.

Even at its most dysfunctional, Congress can come together to pass a defense authorization bill.

That cooperation has occurred for 63 consecutive years, and there is little reason to believe Congress won’t find bipartisan compromise on a defense bill by the end of 2023.

The bill’s consideration last month also included a robust debate on a permitting reform proposal from Senate Energy and Natural Resources Chair Joe Manchin (D-W.Va.). The measure was ultimately left out of the final bill.