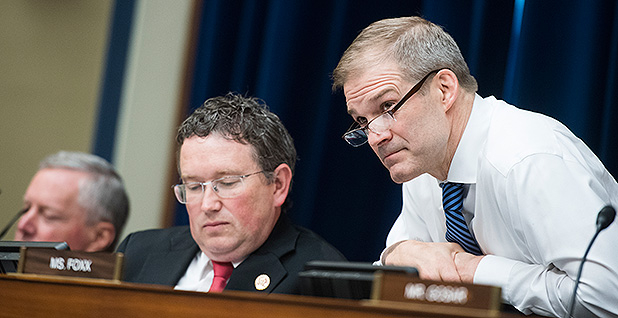 Two House Oversight and Reform panels met yesterday to discuss climate change, but they didn’t do much overseeing.

Instead, the hearings were often marred by bickering over basic science and relentless Republican attacks on the Green New Deal, demonstrating the fluid GOP stance on climate issues.

First up was a full committee hearing where Republicans repeatedly yielded their time to conservative Rep. Thomas Massie. The Kentucky Republican questioned climate science and attacked the credentials of former Secretary of State John Kerry, one of the witnesses (Greenwire, April 9).

"There’s not a single climate denier in this room," Massie said, before casting doubt on well-established science that says greenhouse gas emissions are warming the planet and referring to Democrats as "photosynthesis deniers."

It was another twist on the kind of partisanship that has defined climate debates on Capitol Hill for years, even if witnesses at both hearings repeatedly called for bipartisan action. The two oversight hearings also highlighted the fact Republicans are all over the place on climate change, except when it comes to the Green New Deal.

Republicans on the Science, Space and Technology Committee, as well as the Energy and Commerce Committee, have professed belief in the science and touted "energy innovation" as their solution. However, several Oversight GOP members yesterday openly doubted man-made climate change and even the existence and severity of sea-level rise.

But if there’s one thing all Republicans have in common, it’s a strong distaste for the Green New Deal, the progressive climate plan from Rep. Alexandria Ocasio-Cortez (D-N.Y.) and Sen. Ed Markey (D-Mass.). That distaste has translated into new energy — and injected new partisanship — into the climate debate.

"I hope we hear a lot from Mr. Massie," ranking member Jim Jordan (R-Ohio) said in his opening statement, after noting Massie is an engineer who owns an electric car.

"But I’m not sure this hearing is about needing truth from people like Congressman Massie," Jordan said. "I think it’s about the Green New Deal and the regulations and central government planning and the politics that come with it."

The hearing was not supposed to be about the Green New Deal, but it nonetheless became the topic du jour for the GOP.

While the subject was nominally the national security implications of climate, Democrats spent much of their time rebuffing those attacks and decrying the Trump administration’s proposed "adversarial" review of climate science.

One of the few Democrats to bring up the Green New Deal at all was Ocasio-Cortez, who noted most of the Republican attacks on the resolution are not based on the resolution at all, but on a fact sheet her office put out with the rollout and later retracted.

"While I am incredibly flattered that the ranking member and many members across the aisle seem to be so enamored with a nonbinding resolution presented by a freshman congresswoman who was sworn in three months ago, I think that ironically, despite that fixation, it doesn’t seem that they’ve actually read the contents of proposed and presented resolution," she said.

"I would encourage that you don’t need Cliffs Notes for a 14-page resolution," she said.

Ocasio-Cortez also pushed Kerry and former Defense Secretary Chuck Hagel, a one-time Republican senator from Nebraska, to make the broader point that not acting on climate could have consequences for the economy and even human life.

"In terms of leadership, if we fail to act, or even if we delay acting, we will have blood on our hands," she said.

‘Let’s have no illusion’

The Oversight and Reform Subcommittee on Environment met later in the afternoon and offered a more concrete preview of how Democrats on the panel would like to address climate change.

Subcommittee Chairman Harley Rouda (D-Calif.) said it was the first of three fact-finding hearings to tackle the issue. The others will address current and future opportunities to address climate change.

They brought in a pair of prominent climate scientists and former Sen. Tim Wirth (D-Colo.) to examine the history of inaction on climate. The conversation inevitably delved into fossil fuel propaganda campaigns that emerged with the scientific consensus in the late 1980s and early ’90s.

The difference between early opposition groups, such as the Global Climate Coalition, and modern groups that oppose the scientific consensus, is that they often are less obvious, Wirth said.

"I think the organizations that are in opposition have become much more subtle and sophisticated than they were before," Wirth said.

But Republicans weren’t buying into the conversation, even if the tone was less contentious. Rep. Clay Higgins (R-La.) suggested that scientific consensus can change and brought up conjecture about global cooling in the 1970s.

"Let’s have no illusion about the point of today’s hearing," he said. "The majority has called this meeting for the sole purpose for condemning the oil and gas and petrochemical industry."

The afternoon also featured a House Homeland Security Subcommittee on Emergency Preparedness, Response and Recovery hearing on climate, which was injected with its own dose of climate partisanship.

Ranking member Peter King (R-N.Y.) questioned whether climate change is even in the panel’s jurisdiction, echoing concerns from Republicans on the Natural Resources Committee.

"I do hope that as we go forward, we realize that our main goal as a committee, our main purpose from the genesis, was to focus on terrorism. And I realize that has been expanded now, which I understand, I support that, but I think we should leave the debate over climate control and global warming to other committees," King said.

"We can accept for the purpose of the argument that everything is true, and then we can focus on what the mitigation should be rather than getting into debates on how to change the climate, or prevent climate change," he added.

"I think there’s a potential future where there are growing resource conflicts," Manning responded, listing access to clean drinking water and access to land for grazing and growing crops.

"As you increase conflict, you have instability in nations, you have radicalization, you have all the ingredients necessary that we have seen historically that lead towards radicalization and terrorism," he said.

Rep. Lauren Underwood (D-Ill.) added that FEMA’s strategic plan has included climate change in the past, allowing it to "plan forward."

The Department of Homeland Security wrote detailed documents on climate during the Obama administration, including its Climate Change Adaptation Roadmap in 2012.

But the agency’s efforts on climate have largely been halted under the Trump administration and the tenure of outgoing Secretary Kirstjen Nielsen, who announced her resignation Sunday (Climatewire, April 9).

"There are serious questions as to how they will be able to respond as climate change intensifies hurricanes and other disasters," Payne said. "However, instead of trying to incorporate climate change in how it plans for the future, FEMA has stripped any mention of it from their 2018-2022 strategic plan, which guides the agency’s actions over the next few years."