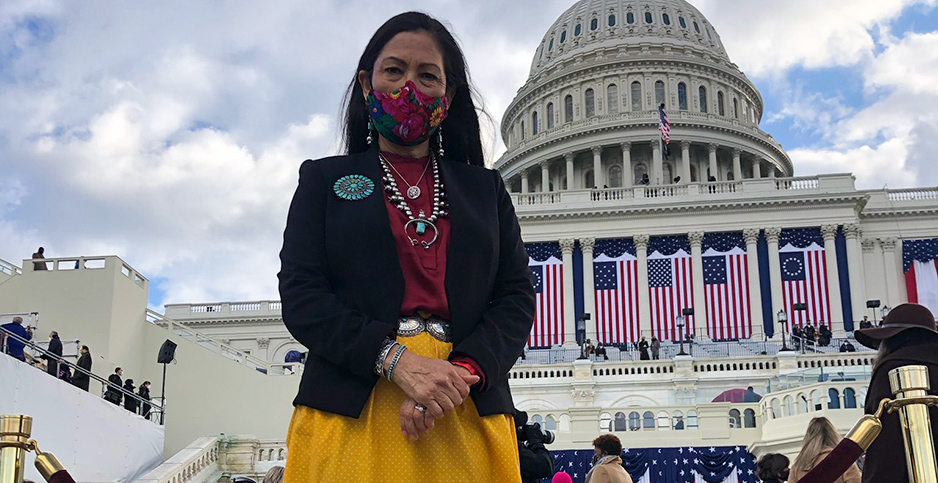 When President Biden picked Rep. Deb Haaland to be his Interior secretary, the positive response to the historic choice was so enormous, it virtually overshadowed any meaningful dissent.

Supporters who had been lobbying for the New Mexico Democrat cheered the selection of a staunch progressive and environmental defender, while news stories played up the groundbreaking nature of her appointment: the first Native American to ever lead the federal agency with direct oversight of tribal interests.

But now that Haaland could be on track for confirmation hearings to begin next month — perhaps as soon as next week — the fierce opposition is starting to make itself known.

Sen. Bill Cassidy (R-La.), who sits on the Senate Energy and Natural Resources Committee, which will oversee Haaland’s confirmation proceedings, appears ready to hold Haaland to account for the Biden administration’s plans to stop issuing new leases for oil and gas drilling on federal lands.

"It won’t hurt the people who are sitting around congratulating themselves on ‘leave it in the ground’ policies," Cassidy told E&E News. "It will hurt a family who was able to send their children to a better school, take a nice vacation in the summertime. … It will destroy their livelihoods."

Rep. Pete Stauber (R-Minn.), who as a House member does not get a vote on whether Haaland is installed at the Interior Department or not, is nonetheless seeking to use his platform to call attention to what he says are worrisome elements of her record.

"The nomination of Representative Haaland as Interior Secretary embodies clear support for the Green New Deal and a rejection of even the potential of high-wage jobs," Stauber wrote yesterday in a letter to Biden co-signed by 14 fellow House Republicans.

The members added, "We implore you in the strongest terms to withdraw [her] nomination … and instead nominate a consensus-driven individual who will not implement policies that will kill jobs and increase the country’s reliance on foreign adversaries."

There has been speculation that Haaland won’t be confirmed until later in February or even March, with Democrats hoping to avoid a situation where they have too many vacancies in their slim House majority and it becomes more difficult to advance the early pieces of the new president’s legislative agenda (Greenwire, Dec. 22, 2020).

As Haaland waits to get called to the hot seat, Biden is taking a series of aggressive actions that fall within the Interior Department’s purview, and that she will certainly be asked about during confirmation proceedings.

On Biden’s first day in office, he instituted the controversial 60-day halt on issuing new leases for oil and gas drilling on federal lands, which he is expected to follow up on later today with an extended one-year moratorium. It would align with a position Haaland has taken as a member of Congress, and around which Republicans are sounding the alarm (E&E Daily, Jan. 25).

"Such an action by your Administration would be as extreme as it is radical, and it would only further divide the country," 20 House Republicans — led by the top three members of leadership — wrote in their own letter to Biden yesterday specifically regarding the potential long-term ban on oil and gas leasing.

In a brief interview on Capitol Hill yesterday, Sen. Joe Manchin (D-W.Va.), the incoming chairman of the Committee on Energy and Natural Resources, who tracks to the center-right on energy policy, didn’t suggest he had a problem with Haaland but didn’t indicate he would defend her against Republican opposition, either.

"I’ve Zoomed with her. I have not met her personally," Manchin told E&E News. "She’s a very nice person. I don’t know her very well; I just want to do a little background check."

Manchin, explaining that he tends to be "deferential" to letting presidents assemble their Cabinets, said he would "assume we’re doing Deb next week, I would think. I haven’t heard, but I’m open to it."

Interior declined to comment on the schedule for Haaland’s confirmation.

Many critics of Haaland and her policies are doing so from the perspective of parochial concerns.

Cassidy, whose state relies on revenue from oil and gas drilling off the Gulf Coast, said in a statement earlier yesterday that Biden’s leasing moratorium would be "devastating" to "Louisiana’s energy works, economy and coastal restoration efforts."

In a follow-up interview with E&E News, he made clear that he would be appealing to the interests of Haaland’s own home in New Mexico, where oil and gas exploration is a major industry and has divided even Democrats in the state about how to balance an environmental ethos with the reality of a local economic driver.

"At least I can say the secretary of Interior is coming from a state which has many families whose future will be destroyed because of this order," Cassidy said. "I suppose the best thing I can ask is that somebody at least have sympathy, as opposed to living in some elite coastal city."

Meanwhile, for Stauber, his letter represents his second effort in as many days to prevent the Biden administration from killing a copper-nickel mining proposal in northeast Minnesota.

His newly introduced "Saving America’s Mines Act," H.R. 488, would require Congress to approve mineral withdrawals on federal lands — a nod to his steadfast support for the Twin Metals copper-nickel project near the Boundary Waters Canoe Area Wilderness, which he hopes will spark a mining renaissance in the Iron Range portion of his district (E&E Daily, Jan. 26).

The Obama administration proposed a ban on mining in an area of the Superior National Forest that would have squashed this project, and the new Biden administration appears to share that posture.

So does Haaland. In the previous Congress, she co-sponsored H.R. 5598, a bill to reinstate the Superior National Forest mining prohibition that the Trump administration axed. Her support for the bill represents one of her "attacks on responsible development," Stauber’s letter contends.

The mine could be a test case for Haaland at Interior, as the department’s Bureau of Land Management is leading the project’s environmental review. It could also come up at her confirmation hearings, but Stauber will have to find senators who are sympathetic to his cause to press the case.

Minnesota’s two Democratic senators, Amy Klobuchar and Tina Smith, have been somewhat reticent in the past to dive into the Twin Metals debate, but both are highly unlikely to make it an issue that would jeopardize Haaland’s confirmation prospects in a split legislative body.