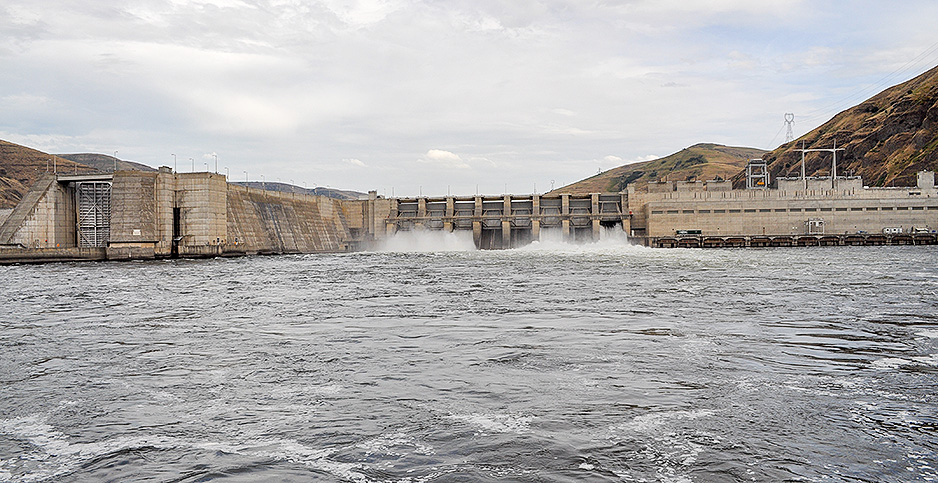 The fish wars of the Pacific Northwest have raged for decades over Lower Granite Dam and three other dams on the Lower Snake River in eastern Washington. Jeremy P. Jacobs/E&E News

Idaho Rep. Mike Simpson has proposed a sweeping $33.5 billion plan to save the Pacific Northwest’s iconic salmon that includes breaching four of the most controversial dams in the country.

Simpson’s plan would take out the earthen berms at four dams on the Lower Snake River in eastern Washington, allowing the waterway to flow through.

But the proposal goes much further than that, offering a framework that would remake the region’s energy system and replace what the dams offer in power production and barging for the region’s farmers.

It is the most ambitious effort to rethink the region’s sprawling hydropower system in more than 40 years, and Simpson plans to draft legislation to include in President Biden’s infrastructure stimulus package planned for later this year.

Simpson said in an interview that there is a widespread scientific consensus that many of the region’s iconic salmon runs — especially those that used to return to central Idaho — are on the verge of extinction, despite $17 billion spent on recovery efforts.

"If we are going to save salmon, let’s do it," he said. "Quit messing around."

The plan also makes Simpson, who represents a conservative area of Idaho, one of the first Republicans ever to call for breaching a dam. He said he came to that conclusion after studying the salmon problem from every angle.

"Is there any way we could find that we could restore salmon runs or give them a chance of survival without taking the dams out?" Simpson said. "Frankly, we couldn’t find a way."

The plan, now mostly in outline form, seeks to address — and reform — at least part of a hydropower system and bureaucracy that have existed in the Pacific Northwest for nearly a century.

It would create a $33.5 billion Columbia Basin Fund. Those dollars would be funneled into a series of buckets.

For example, $1.4 billion would go to physically breaching the four dams — Ice Harbor, Lower Monumental, Little Goose and Lower Granite. The dams would begin coming out in 2030.

Another $10 billion would be dedicated to replacing the power provided by those four dams, potentially through battery storage, small modular reactors or other methods.

More than $2.2 billion would flow to the region’s agricultural sector to find another way to transport grain and other crops, since removing the dams would affect barging.

It would also seek to hit the pause button on the decadeslong litigation war over the dams, and it includes provisions that in theory would protect other dams in the basin from removal efforts and lawsuits.

And it would create an entirely new entity, the Northwest State and Tribal Fish and Wildlife Council, to manage fish recovery.

Simpson, the top Republican on the House Energy and Water Development Appropriations Subcommittee, said the plan is an acknowledgment that it doesn’t help the region to just take out the dams; all of these sectors must be addressed.

And he has cast the effort as a bid to shape the region’s future, instead of having it shaped by an inertia that is killing the fish.

Some critics may look at the plan as "just trying to buy off different constituencies. That isn’t the case," Simpson said. "It’s a recognition that the dams are valuable and provide a lot of benefits for different sectors of our economy."

Simpson’s odyssey on the issue began three years ago, and he went public with his efforts in an April 2019 speech.

He referred to the fish in nearly biblical terms, referring to how they swim 900 miles from the ocean, gaining 7,000 feet of elevation to spawn and die in central Idaho.

"It was the end of a cycle," he recalled, "And the beginning of a new one. These are the most incredible creatures, I think, that God’s created" (Greenwire, Sept. 3, 2019).

Scientists and conservationists have said for years that the four Lower Snake River dams are the proverbial straw that broke the camel’s back for the salmon runs that return to Idaho.

Including the four, those fish must navigate eight dams when they migrate downstream as juveniles, and again when they return as adults.

Many don’t return, and the return rate for the Lower Snake River runs is significantly worse than for other runs in the basin that have fewer dams standing between their spawning grounds and the ocean (Greenwire, Sept. 25, 2019).

Simpson and his staff have engaged in more than 300 meetings with various stakeholders, trying to find solutions.

The result is still a framework but also an acknowledgment of two fundamental problems in the region — declining fish runs and the declining value of some of its hydropower dams.

"What he’s proposing is so much bigger than dams. It’s about the region," said Justin Hayes of the Idaho Conservation League. "It’s about working together to break out of the status quo, which has kept the region in conflict."

Both systems feature entrenched bureaucratic interests that may present challenges for Simpson, including the Bonneville Power Administration (BPA), the region’s public hydropower marketer, which is housed in the Energy Department, and those who rely on the river for barging goods, like farmers.

"This plan would remove highly functional run-of-river dams with world-class fish passage that provide fundamental benefits like clean energy and efficient commerce to our region," said Kristin Meira of the Pacific Northwest Waterways Association. "It is not a responsible use of taxpayer dollars and ultimately is a disservice to our region’s fish."

BPA could present an even bigger challenge. The agency thrived for decades after Congress established it in 1937 to provide public power at cost from 31 dams and a nuclear plant, including behemoths like Grand Coulee.

But it has gradually seen its competitive advantage decline, both because it has been saddled with paying billions of dollars in fish mitigation and because of the rapidly dropping cost of renewable energy from wind and solar.

BPA’s wholesale rates have risen 30% since 2008, and current 20-year contracts with its customers — retail utilities in the region — end in 2028.

Analysts and some of those utilities have acknowledged that they’ll consider other sources, with one saying BPA’s energy is no longer a "no-brainer" (Greenwire, Nov. 27, 2019).

BPA has recognized it has a problem and has sought to right the ship. But its debt levels have remained high, and it has struggled to maintain strong credit ratings.

Simpson’s plan would give BPA several things that would help it. It would increase BPA’s federal borrowing authority from $7.7 billion to $15 billion, and it would cap its spending on fish mitigation at about $480 million per year.

It would provide them $10 billion to replace the lost power from the dams, as well as another $2 billion for grid resiliency and $4 billion to cover other lost revenues.

BPA also would no longer be charged with managing the fish recovery plan, which would fall to the new tribal and state entity.

John Hairston, BPA’s administrator and CEO, said the agency would continue to engage with Simpson as he moves toward legislation.

"We respect Congressman Simpson, and appreciate his interest in salmon recovery in the Columbia River Basin," he said in a statement. "BPA looks forward to more conversations about this concept, and the region’s environmental and economic future."

Kurt Miller of Northwest RiverPartners, a group that represents many of the public power utilities that buy electricity from BPA, said he appreciates that Simpson’s plan acknowledges that the dams provide value.

But he also wonders whether Simpson’s package can protect the other dams. He said he worries about a slippery slope; once the Lower Snake River dams come out, conservationists will push to remove the next dams downriver.

"When it comes to productive dams with good fish passage, the arguments about the Lower Snake River dams could apply to any dam," Miller said.

"It would never end," he added. "I think those provisions are really important, but it’s a big worry for me."

Simpson has said he is asking "what if" questions, and he expects to have robust conversations with all stakeholders.

He is also counting on the Pacific Northwest’s congressional delegation, which now holds many power positions in both chambers.

Simpson will face at least some opposition, however, including from other Republicans in the delegation. Washington Rep. Cathy McMorris Rodgers, the top Republican on the House Energy and Commerce Committee, is a steadfast supporter of the dams.

"These dams are the beating heart of Eastern Washington," she said in a statement. "Spending $33 billion to breach them — with no guarantee that doing so will restore salmon populations — is a drastic, fiscally irresponsible leap to take."

Rodgers introduced a resolution in the House Friday expressing support for hydropower and existing infrastructure.

The proposal would elevate the role of historically marginalized tribes.

Shannon Wheeler, the chairman of the Nez Perce Tribe, said the salmon are a sacred part of his culture and one that the tribe negotiated to protect in its treaty with the government.

But Wheeler has watched the decline of the fish and how it has affected his people.

"To see that as a kid, and we could go there and catch our fill in the early ’70s," he said, referring to one of his family’s favorite fishing spots. In the following years, the numbers dropped until, "last year, there were only 11 total fish we could harvest."

"I think Congressman Simpson is a courageous leader," Wheeler said. "He’s broadened the lens so everyone can see the big picture."

Simpson is asking the region to take a hard look at itself and think about what its future should look like. What remains to be seen is whether the dwindling salmon runs are enough to motivate large changes to the agriculture, transportation and power sectors.

Chris Wood, the president and CEO of Trout Unlimited, said there’s a reason it has been 40 years since Congress has tried to reform the region’s fish and power management: It’s complicated.

"Most politicians would rather not talk about this," he said.

Simpson and his staff aren’t only trying to save the salmon, Wood said, but "they are trying to make sure all boats get lifted."

It won’t be easy, and Simpson appears to know that.

"We’ve looked at it, and this is probably the biggest environmental restoration process in the world," he said. "It is a heavy lift."