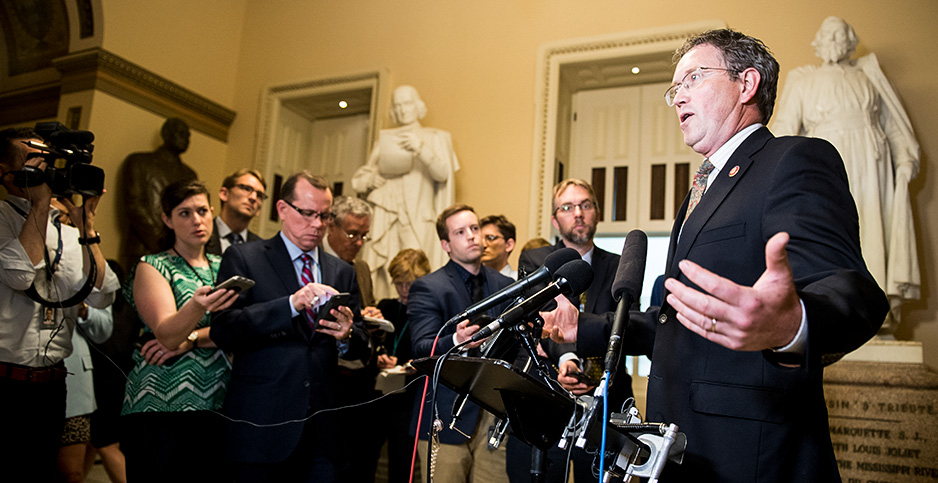 Rep. Thomas Massie, the Kentucky Republican who blocked a major disaster-relief bill Tuesday, has asked Presidents Trump and Obama on at least four occasions to approve disaster aid for his home state and for his own congressional district.

Massie’s pleas have helped bring $56.4 million in federal disaster aid to Kentucky, even while he has voted against legislation that would provide billions of dollars to other areas hit by disasters, records show.

Massie signed an April 5 letter to Trump asking him to approve federal assistance for 57 counties in Kentucky — including 12 in Massie’s district — that were damaged by storms and flooding in February.

The five-paragraph letter, signed by Kentucky’s two senators and its six House members, says that federal money "would aid Kentucky communities and families so severely impacted by this most recent disaster." Trump approved federal relief on April 17.

Massie has signed at least three other letters asking presidents for disaster money. He otherwise has been a leading opponent of efforts in Congress to give money to states struck by catastrophic disasters.

Lawmakers, including some Republicans, assailed Massie for his maneuver Tuesday that prevented the House from quickly approving a $19.1 billion spending measure — supported by Trump — to help victims recover from hurricanes in Puerto Rico, wildfires in California and from other disasters elsewhere.

"Hypocrisy knows no bounds when it comes to disaster aid and the House Republican Conference," Drew Hammill, a spokesman for Speaker Nancy Pelosi (D-Calif.), said in a statement to E&E News when asked about Massie.

In September 2017, Massie was one of three House members — all of them Republicans — to vote against a $7.85 billion relief package to help Texas recover from Hurricane Harvey, which dumped record rainfall on the greater Houston area.

"This bill recklessly increases the national debt because it contains no spending offsets," Massie said in a statement after the House passed the bill by a 419-3 vote. Trump signed the measure.

Massie expressed the same sentiment in January 2013 when he voted against providing $9.7 billion to help repair homes damaged by Superstorm Sandy. "This bill recklessly increases the national debt because it contains no spending offsets," Massie said in a statement at the time. Massie was one of 67 House Republicans who opposed the measure. It was enacted.

On at least four occasions since taking office in 2012, Massie has urged Trump or Obama to approve disaster spending for Kentucky. In each case he signed a letter with other members of Kentucky’s congressional delegation supporting a request by the state’s governor for disaster aid. Members of Congress commonly write such letters.

"The counties being requested for federal assistance are confronting a number of significant economic challenges, and the need among many of these citizens is great," says a letter signed by Massie along with Kentucky’s Republican senators, Majority Leader Mitch McConnell and Rand Paul, and its senior House member, Hal Rogers, a Republican.

Obama approved disaster assistance for Kentucky, which received $25 million in federal aid, according to federal records.

Massie signed similar letters in March 2018 and in April 2018 asking Trump to approve disaster funds for parts of Kentucky that were damaged by back-to-back storms and flooding in February and March of that year. All eight members of Kentucky’s congressional delegation signed those letters.

Trump approved both requests, which have resulted in Kentucky receiving $31.4 million in federal aid so far. The money comes from the federal Disaster Relief Fund, which receives annual funding from Congress and special cash infusions when the balance runs low. The fund had an $18.2 billion balance on April 30.

In 2011, when Massie was judge executive of Lewis County, Ky., he joined an effort by then-Gov. Steve Beshear (D) to seek federal disaster aid following a series of damaging floods. "The main reason I wanted to be included is that private individuals, some of whom have been hit hard, would not qualify for any kind of funding unless we joined in the declaration of disaster," Massie said, according to an April 11, 2011, news article in the Portsmouth Daily Times of Ohio.

Massie spokeswoman Laura Lington did not respond to requests for comment yesterday.

Massie told reporters Tuesday after he blocked the $19.1 billion disaster bill that he opposed its cost and the legislative process that Pelosi used in an attempt to pass the measure.

The Senate passed the bill on May 23 by an 85-8 vote after Trump agreed to support a disaster bill that did not contain any money for a border wall. With House members leaving Washington for an extended Memorial Day recess, Pelosi sought to approve the disaster bill using unanimous consent, a legislative procedure that avoids a formal vote but requires no opposition in the House.

But on Friday, Rep. Chip Roy (R-Texas) scuttled Pelosi’s plans by objecting to the bill. On Tuesday, with Roy apparently not in Washington, Massie took to the nearly empty House floor to register his objection.

Pelosi and several Republicans criticized Massie, saying that his maneuver only delayed passage of the bill until the House reconvenes next week.

"This is yet another example of politicians putting their own self-interest ahead of the national interest," Sen. David Perdue (R-Ga.) wrote on Twitter.

Massie told reporters it was a matter of principle: "The more often we let them get away with this, the more frequently they will do it until basically all congressmen are just employees of the Capitol Visitor Center."