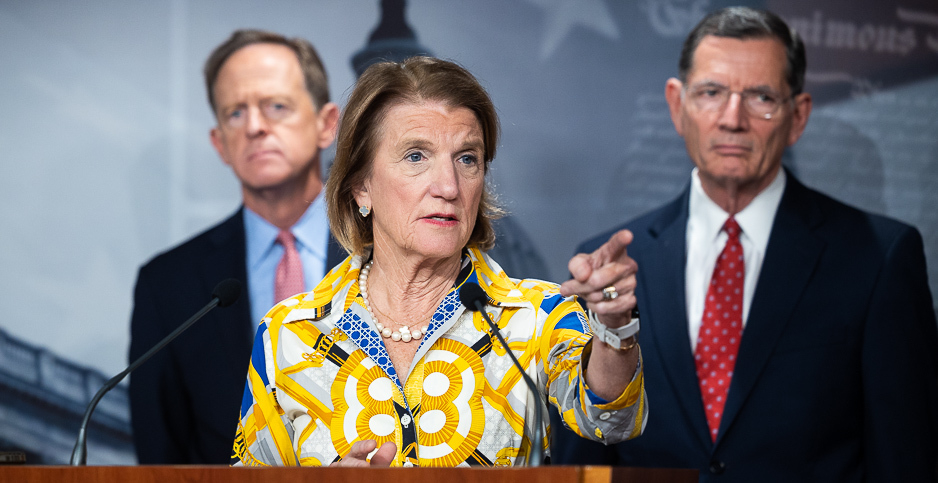 "We believe that this counteroffer delivers on what President Biden told us in the Oval Office that day — and that is to try to reach somewhere near a trillion dollars over an eight-year period of time; that would include our baseline spending. We have achieved that goal with this counteroffer," said Capito, who is taking a leading role in the talks.

The counteroffer comes in at $360 billion over the $568 billion plan Republicans initially floated last month.

According to a memo Republicans sent to Biden this morning, the counteroffer includes a $91 billion increase over baseline spending for roads and bridges and a $48 billion boost above current spending for water infrastructure.

It includes a "one-time" boost of $25 billion for airports and $65 billion for broadband, as well as a $22 billion increase over baseline spending for passenger and freight rail and an additional $6 billion for water storage in the West.

Additionally, the new proposal would hand $4 billion to electric vehicle infrastructure — a nod to a top Biden priority that Republicans have hammered almost daily since the president’s plan was released in late March.

Biden’s original American Jobs Plan envisioned a $174 billion investment in EVs, although the White House’s most recent offer slimmed the $2.3 trillion down to $1.7 trillion.

The White House and GOP negotiators have been at odds over the package’s cost, scope and pay-fors. Republicans, Capito said, are "sticking to the core, physical infrastructure, what is the definition of infrastructure."

"I think that’s what the American people think of when they think of infrastructure, and that’s certainly what we do, too," she said.

However, the counteroffer relies on pay-fors that the White House continues to oppose, including the repurposing of already enacted COVID-19 relief money and user fees. It also cites unidentified "infrastructure financing" as an offset but does not elaborate.

The administration and many Democrats have indicated an openness to financing that encourages private-public partnerships, including provisions that make it easier to use bonding to pay for projects.

She also said the amount of unobligated COVID-19 relief funding isn’t quite what Republicans think.

"We should also be clear that there are simply not hundreds of billions of dollars in COVID relief funds available to repurpose," Jean-Pierre told reporters.

"As of the end of March, about 95% of the $3 trillion in pre-Rescue Plan COVID relief funding has either been obligated or is for PPP [the Paycheck Protection Program], unemployment insurance or nutrition assistance, where the money is going out as planned to specific businesses and people."

"As for the path forward, the President called Senator Capito thank her for the proposal, and to tell her that he would follow-up after getting additional detail. We are also continuing to explore other proposals that we hope will emerge," said Psaki in a statement.