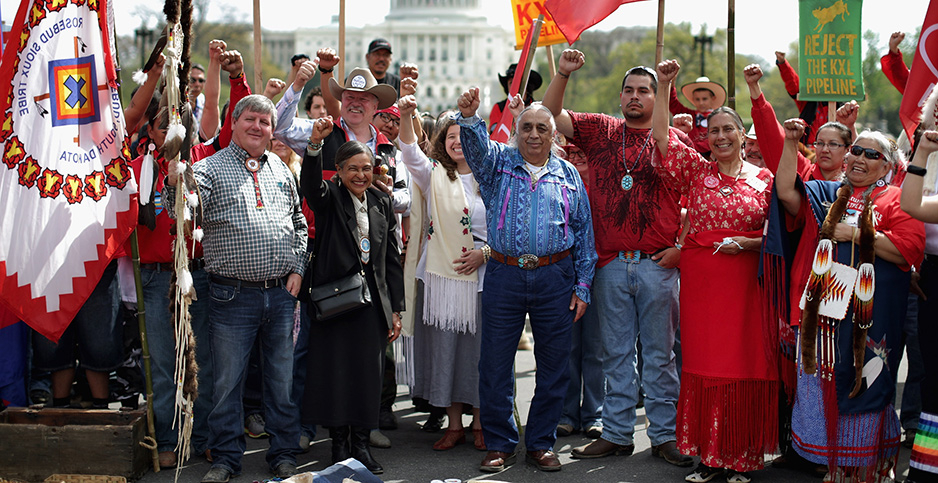 Opponents of the Keystone XL oil pipeline protesting at the Capitol in 2014. Chip Somodevilla/Getty Images

The official death of the Keystone XL pipeline drew predictably mixed reactions on Capitol Hill last night as Democrats and their environmental allies praised the outcome and Republicans mourned the missed economic potential of the project.

The announcement from TC Energy Corp., the Canadian owner of the project, brings to a close an energy policy fight that divided lawmakers for more than a decade in what amounted to a preview of multiple pipeline wars that would follow.

For Democrats, the pipeline and the oil sands crude it would move represent an affront to climate action. For Republicans, it stands for energy production jobs and the pursuit of energy independence. That rhetoric was on display last night.

"Great news: the Keystone XL pipeline is finally dead," Sen. Jeff Merkley (D-Ore.), the chairman of the Interior-Environment spending subcommittee, tweeted. "Grateful to the activists and allies who worked tirelessly so that we could see this day!"

First proposed in 2008, the pipeline was set to move oil pulled from the carbon-intensive Canadian oil sands to Gulf Coast refineries. Due to its cross-border pathway, the project required a State Department approval that left room for White House intervention and political pressure.

President Biden made the cancellation of the permit, granted under the Trump administration, one of his first executive actions in office following his inauguration in January. Biden cited its climate implications as reason for his action, and TC Energy admitted it did not see a path forward after that.

That cross-border approval was the subject of multiple votes across Capitol Hill, passing both the Republican-controlled House and Senate in 2015. Former President Obama vetoed the bill.

As recently as February, the Senate, as part of its budget vote-a-rama floor consideration, found a majority of lawmakers to back the project on a 52-48 vote, with Energy and Natural Resources Chairman Joe Manchin (D-W.Va.) and Sen. Jon Tester (D-Mont.) joining Republicans (E&E Daily, March 8).

The amendment proved nonbinding and was ultimately wiped away from the final budget resolution.

Republicans have voiced frustration with the Biden decision, and have even gone as far as to make it a central messaging theme across its platform.

Lawmakers have repeated estimates that the project’s cancellation would kill 11,000 jobs to help in its construction, although fewer than 100 of those jobs were likely to be permanent pipeline maintenance jobs.

"There is no other way to put it. This is a win for environmental extremists. A loss for American workers," tweeted Rep. Kelly Armstrong (R-N.D.).

Republicans have introduced numerous bills to undo the permit removal since January. Just yesterday, Sen. Jim Risch (R-Idaho) joined with 10 other Senate Republicans to introduce legislation that would require the Department of Labor to submit a report to Congress on the number of jobs lost as a direct or indirect result of the project’s cancellation.

"At a time when gasoline prices are spiking, the White House is celebrating the death of a pipeline that would have helped bring Americans relief."