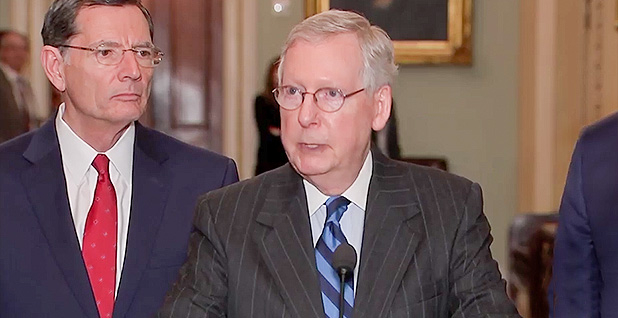 A key Senate Republican expressed confidence yesterday that Andrew Wheeler will be confirmed as EPA deputy administrator this week, despite Democrats’ calls for more time to vet the man they say may well replace Scott Pruitt as the nation’s top environmental regulator.

"I haven’t heard any objections from anyone on the Republican side of the aisle, so I expect it’s going to go through without any difficulty at all," Barrasso told reporters.

Majority Leader Mitch McConnell (R-Ky.) said he intends to keep the chamber in session until a slate of six nominees is confirmed, including weekend work.

"We’re going to make sure the six that have been brought forth are going to get done this week," Barrasso said.

A procedural vote is scheduled for this morning. Democrats may then insist on 30 hours of post-cloture debate, delaying a final roll call.

Delaware Sen. Tom Carper, the top Democrat on EPW, told reporters yesterday when asked about Democratic plans, "We’ll see how it plays out."

Still, Carper reiterated that Democrats plan to use the time to spotlight the scandals surrounding Pruitt.

"We want to make sure that we use the time that is available to us on the Wheeler nomination to fully explain our grave concerns about the direction and leadership that Scott Pruitt is providing at EPA," Carper said. "And his name may not yet be a household word, but by the time we finish we expect it to be."

Sen. Tom Udall (D-N.M.), who has called for more time to review Wheeler’s nomination given Pruitt’s woes, conceded yesterday that Republicans are "going to ignore us" (Greenwire, April 11).

"I think the leadership on the Republican side is willing to burn the 30 hours and get it done," he said.

Stoking fears that Wheeler may be the next EPA administrator was a report by the conservative Daily Caller, which wrote yesterday the White House was considering such a move. The White House did not respond to a request for comment.

Sen. Lisa Murkowski (R-Alaska), chairwoman of the Senate Energy and Natural Resources Committee and the Appropriations subcommittee that funds EPA, said she hadn’t heard anything on the matter.

"That would be surprising to me because what does that mean the president is intending to do with the administrator?" Murkowski said.

The senator pointed to a looming backlog of nominees for top Cabinet posts when asked about the difficulty of confirming a potential replacement for the embattled EPA chief. Murkowski also said the string of controversies are distracting from the agency’s critical work.