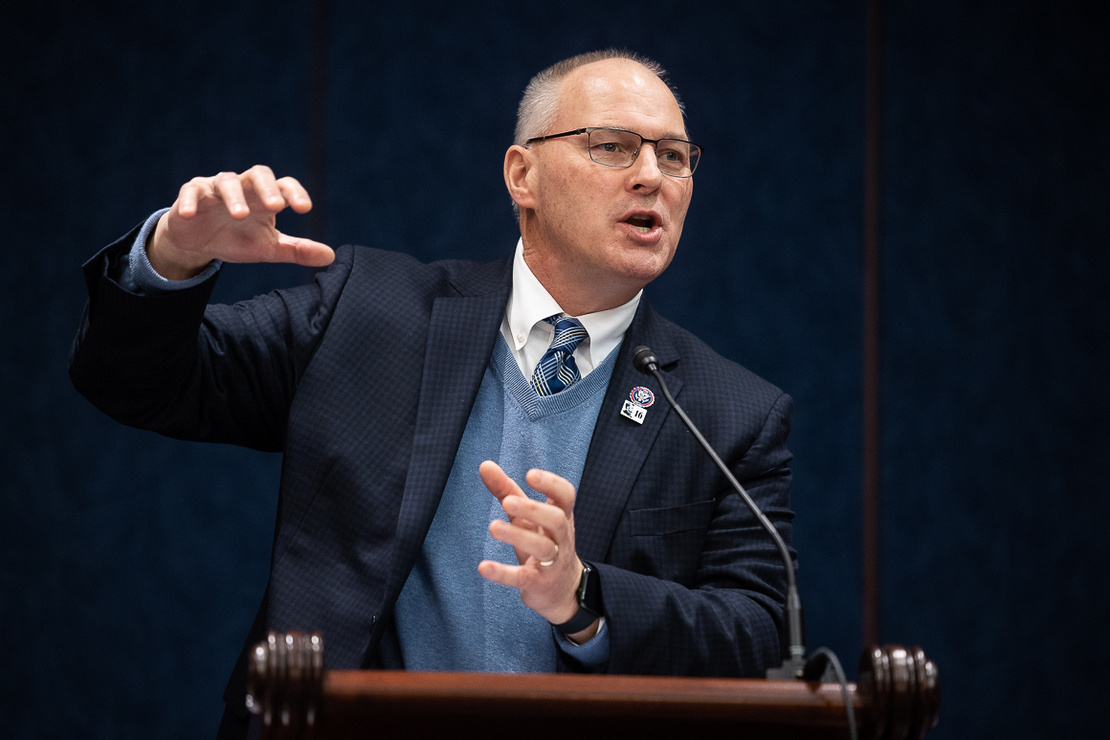 At a House Natural Resources Committee hearing in the fall of 2020, Republicans snubbed the “Environmental Justice For All Act” as a regulatory red-tape creator that would stifle the economy, open the floodgates for frivolous lawsuits and plunge the most vulnerable households into “energy poverty.”

At a hearing yesterday on that very same bill, GOP members of that same committee made similar arguments. But they also had new complaints that the measure assumes the existence of racism where they say none exists. They also lobbed fresh accusations that Democrats are ignoring the pleas of the communities of color they say they want to protect.

“I joined this hearing largely out of curiosity over how the leftist majority can turn anything, even natural resources policy, into a racist issue,” said Rep. Tom McClintock (R-Calif.).

“It’s just a dangerous trajectory for us to continue to force this conspiracy of racism on all of these decisions,” Rep. Garret Graves (R-La.), weighed in.

The Republican disdain for H.R. 2021, which supporters have called the most ambitious environmental justice framework to date, has grown decidedly more pronounced over the past year and a half (E&E Daily, Oct. 2, 2020).

Their opposition has only hardened against the backdrop of President Biden’s energy agenda, which they oppose, and the country’s evolving racial consciousness, which they think Democrats are exploiting to drive a “wedge” into the political process.

It threatens to make a partisan bill even more so as Democrats mull trying to pass it in a midterm election year.

“[It’s] truthfully a legislative vehicle for more of the same from this majority,” said Rep. Pete Stauber of Minnesota, the top Republican on the Natural Resources Subcommittee on Energy and Mineral Resources who was filling in yesterday for the full committee ranking member Bruce Westerman (R-Ark.).

The “Environmental Justice for All Act” would codify into law the federal government’s existing environmental justice initiatives; impose new fees on oil, gas and coal companies to fund local transitions away from fossil fuel economies; and require federal agencies to consider the “cumulative” health impacts on a community before approving specific work permits.

The legislation would reverse a 2001 Supreme Court ruling that has made it harder for private citizens to pursue legal remedies when they are victims of actions that disproportionately harm poor, nonwhite neighborhoods.

It also would serve as the legislative muscle behind the Biden administration’s “Justice40 Initiative,” an executive order directing at least 40 percent of federal investments in environmental cleanup and clean energy toward disadvantaged communities.

“The bill on today’s agenda has many components, but it’s based on a very simple principle and premise: All people have the right to clean air, clean water and an environment that enriches their lives,” said committee Chair Raúl Grijalva (D-Ariz.), the measure’s champion and chief architect.

“The fossil fuel industry and the other polluting industries have a long and troubled history of intentionally building projects that pollute surrounding neighborhoods within communities of color and poor communities,” he continued. “The numbers and statistics are clear, and quantifiable.”

Expert witnesses invited by Democrats to testify at the hearing argued that low-income communities and communities of color are dealing with decades of exploitation by polluting entities that chose to do business in neighborhoods were residents had few resources or recourse to fight back. The legacy of such exploitation, the witnesses said, resulted in high rates of serious health conditions like respiratory disease, asthma and lead poisoning.

“I grew up next to railroad tracks with trains passing at 3 a.m.; I have always lived within five minutes of a refinery and within a block of warehouses,” said Laura Cortez, co-executive director for East Yard Communities for Environmental Justice in Los Angeles. “I attended elementary school next to the 710 freeway that sees 40,000 to 60,000 daily truck trips; my high school’s track was immediately next to train tracks.”

Graves, who lives in a commerce hub at the bottom of the Mississippi River, bristled at the suggestion a community is plagued by racism because they live in the shadow of industry.

“I’ve just been incredibly disappointed by sort of the disposition of this hearing that everything is being done because folks are intentionally trying to discriminate against a certain population. I don’t buy it,” he said. “I’ve got more chemical and oil and gas plants within a few miles of my house than any of you, and I’m not out here yelling about discrimination. There’s a fit there. I chose to live here.”

Rep. Don McEachin (D-Va.), who has worked closely alongside Grijalva on drafting the “Environmental Justice for All Act” with activist input, said Graves “hit the nail on the head: He chooses to live where he lives.”

“He has the resources to move or not move,” McEachin added. “In many cases, individuals who are in EJ communities don’t have those resources.”

‘There is no justice’

Republicans also sought yesterday to undermine Democrats’ environmental justice pursuits by highlighting examples of what they see as efforts to steamroll local communities.

Republicans chose as their witness Harry Brower Jr., mayor of Alaska’s North Slope Borough, where the majority of the population is Alaska Native. Brower’s complaint — and that of the GOP committee members — was that he and his constituents are not being consulted in the Biden administration’s plans for potentially closing down major oil exploration projects in the National Petroleum Reserve-Alaska.

One such initiative, the “Willow project,” is in limbo after the ConocoPhillips Co.-backed $6 billion oil project was struck down by a federal judge. The Biden administration, which had defended Willow in court despite protests from environmental activists, is now proceeding with a supplemental environmental review that could limit the project’s scope. Brower supports the Willow project, saying it would bring jobs and revenue to the community he represents.

Grijalva has been among those urging Biden to shut the project down. At the hearing yesterday, Stauber accused Grijalva of directly lobbying Interior Secretary Deb Haaland on the effort without Brower’s knowledge, and of ignoring Brower’s request for a meeting.

And Rep. Don Young (R-Alaska) suggested that a concern from outsiders about environmental protection would prevent a community from receiving revenue that could be used to guarantee clean drinking water and public education.

“People say, ‘Oh, we’re gonna help the poor, Indigenous people,’ yet they don’t want you to receive the money,” Young said. “There’s such hypocrisy here. There is no justice.”

Not letting ‘bygones be bygones’

While most Democrats either chose to ignore Republican attacks on the legislation or opt for diplomacy, some sought to engage.

Rep. Rashida Tlaib (D-Mich.) apologized on behalf of her GOP colleagues for deploying a “you people rhetoric” at nonwhite Democratic witnesses.

Rep. Jared Huffman (D-Calif.) said Republicans conveniently become “temporarily interested in environmental justice … when they can find a tribal or minority voice that supports a drilling or mining project.”

In an interview with E&E News after the hearing, Grijalva reflected that while the core GOP arguments against the “Environmental Justice for All Act” haven’t changed, Republican lawmakers without question “tried to focus more on the issue of race” yesterday than they have in the past.

“It didn’t really come up the last time,” he said, “but I anticipated it. A lot of the discussion we hear right now is, ‘let bygones be bygones,’ so that a history is either erased or rewritten or we forget about it.”

National Republicans are currently targeting school curricula that they believe have gone too far in teaching about racism. Democrats reject that assertion.

“There was disparate treatment, unequal application of the law, and it happened to … [communities where] one of the factors was income, and the other prominent factor was race,” Grijalva continued. “So to bring it up and say, ‘Let’s be race-neutral and forget about it,’ that’s just saying, ‘Let’s leave everything as is.’”

Grijalva had originally expedited a hearing on the “Environmental Justice for All Act” in his committee after the Democrats’ $1.7 trillion climate and social spending package, which would have made environmental justice investments, stalled in the Senate.

Asked when he will schedule a markup of the bill, however, he declined to give a date or set a deadline and hinted that other committees, like Judiciary or Energy and Commerce, might also want to take a crack at some of the provisions that are arguably within their jurisdictions.

“I would rather err on the side of more input and more support for the bill,” Grijalva said. “I feel good that, if it were to come to a vote, that we would do fine, but I’m not taking it for granted. It’ll be almost unified opposition from the Republican side, so we have to make sure.”