Republicans duel on climate measures behind the scenes 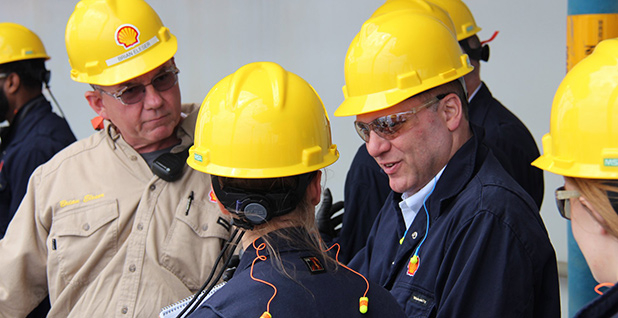 Forty-three House Republicans who say they want to address climate change could face a political test this week when they’re asked to vote on a carbon tax.

The House Rules Committee will decide tomorrow whether to allow a resolution from House Majority Whip Steve Scalise (R-La.) to the floor. It describes a carbon tax as "detrimental" to the economy. Congress adopted a similar resolution in 2016 with the support of every Republican and six Democrats.

The move by Scalise to undermine the idea of taxing carbon dioxide emissions comes as Rep. Carlos Curbelo (R-Fla.), co-chairman of the Climate Solutions Caucus, prepares to introduce legislation that would support doing just that.

Curbelo is shopping draft text to lawmakers, businesses and environmental groups that would end the federal gasoline tax and impose a carbon fee on refiners. The revenue would fund infrastructure projects like highways and rebate low-income consumers who would be hit by higher energy costs, according to Mike McKenna, a GOP energy lobbyist who has seen the draft bill.

Curbelo said in a statement yesterday that he’s preparing to release climate-related legislation "in the near future." He declined to provide details. Regarding the Scalise resolution, he said it presents "a false choice."

"Protecting our environment and economic growth are not mutually exclusive," Curbelo said.

The activity around a carbon tax is happening as a small but durable number of Republican groups push the idea as a conservative way to address rising temperatures. Some of them see Scalise’s move to offer a resolution against the tax as a warning to Republican lawmakers who might support Curbelo’s measure.

"I think that the timing of bringing the [Scalise] resolution to the floor is interesting," said Joseph Majkut, climate policy director at the libertarian Niskanen Center, which supports a revenue-neutral carbon tax. Majkut did not confirm or deny that Curbelo was working on carbon tax legislation.

If Curbelo introduces the carbon bill, it could mark a major shift in climate politics. Republicans have been all but in lockstep in blocking policies to address rising greenhouse gas emissions since 2008, when Sen. John McCain (R-Ariz.) promoted a carbon cap-and-trade policy during his presidential campaign.

Scalise’s resolution comes as Republicans face a potential electoral backlash over President Trump’s temperament and policies. There are signs of Democratic enthusiasm in battleground districts. Most of the 43 Republicans in the bipartisan Climate Solutions Caucus are in competitive races. Some are retiring.

"It doesn’t strike me as a good indication of what kind of a [House] speaker [Scalise] would be uniting the Republican conference if he’s going to put a majority-maker like Curbelo at risk," said former Rep. Bob Inglis (R-S.C.), founder of carbon tax advocacy group republicEn, referring to Scalise’s aspirations to be the next speaker of the House.

At the same time, a number of center-right groups off Capitol Hill are pushing for a carbon tax. The newest is Americans for Carbon Dividends, which is being funded by Exelon Corp., the American Wind Energy Association and First Solar Inc. The group hired former Senate Majority Leader Trent Lott (R-Miss.) and former Sen. John Breaux (D-La.) from Squire Patton Boggs to lobby on the issue and develop legislation.

Republican carbon tax groups expect the Scalise resolution to pass resoundingly. But they contend that any dissent from the GOP caucus would be a victory.

"The difference between zero and one is very large," Majkut said. "My opinion is you’ve got to start somewhere. Is it realistic to think you’re going to move the whole Republican coalition in one go? No."

"There are Republican members who have made the environment and climate change part of their political identity. This vote would undermine both their ambition and the profile they’ve worked hard to establish," said Tony Kreindler, national media director for the Environmental Defense Fund.

There are unanswered questions about Curbelo’s bill — chiefly, what would happen with current regulations on greenhouse gas emissions? Most carbon tax proposals emerging from right-of-center organizations call for eliminating EPA’s authority to regulate carbon emissions. Democrats and environmental groups have been loath to concede those backstops, even for a national price on climate emissions.

For Republicans, it’s a pure winner to vote against a carbon tax, said Paul Blair, director of strategic initiatives with Americans for Tax Reform.

"We are certainly pushing pretty hard to have a vote on this," he said of Scalise’s resolution. "It’s important for Republicans to send a signal that this is nothing more than a consultant’s dream that helps people like Trent Lott get a retainer."

The anti-tax vote could test the 43 Republican members of the Climate Solutions Caucus. They have faced skepticism from environmental groups and Democrats, who say the GOP members joined the caucus as an electoral strategy. Many of them are in swing districts.

Scalise’s measure suggests that a carbon tax would expand the government by collecting more taxes from Americans. Republican climate advocates see it differently. The groups have discussed swapping carbon tax revenues for lower taxes elsewhere, or returning revenues to taxpayers in the form of dividends.

"The key thing that isn’t really addressed by the resolution that could be appealing to a Republican is the idea of using revenue from a carbon tax to reduce other taxes," said Josiah Neeley, energy policy director with the free-market R Street Institute.

As far as politics go, the strategy of holding an anti-tax vote does the trick, McKenna said.

"The repetition does some damage," he said, referring to a similar resolution offered by Scalise two years ago. "You start voting on things three, four, five times, you start building up that record. It’s harder and harder and harder to walk away from it."

Carbon tax advocates on the right "welcome the debate," said Alex Flint, executive director of the Alliance for Market Solutions. He said the idea has firmly entered the realm of public discourse and has earned legitimacy as a policy option.

Scalise’s effort underscores the intellectual potency of a carbon tax, he said.

"We are actually delighted that this debate is going to occur," Flint said. "The discussion about a carbon tax is just beginning, and it will grow over time."