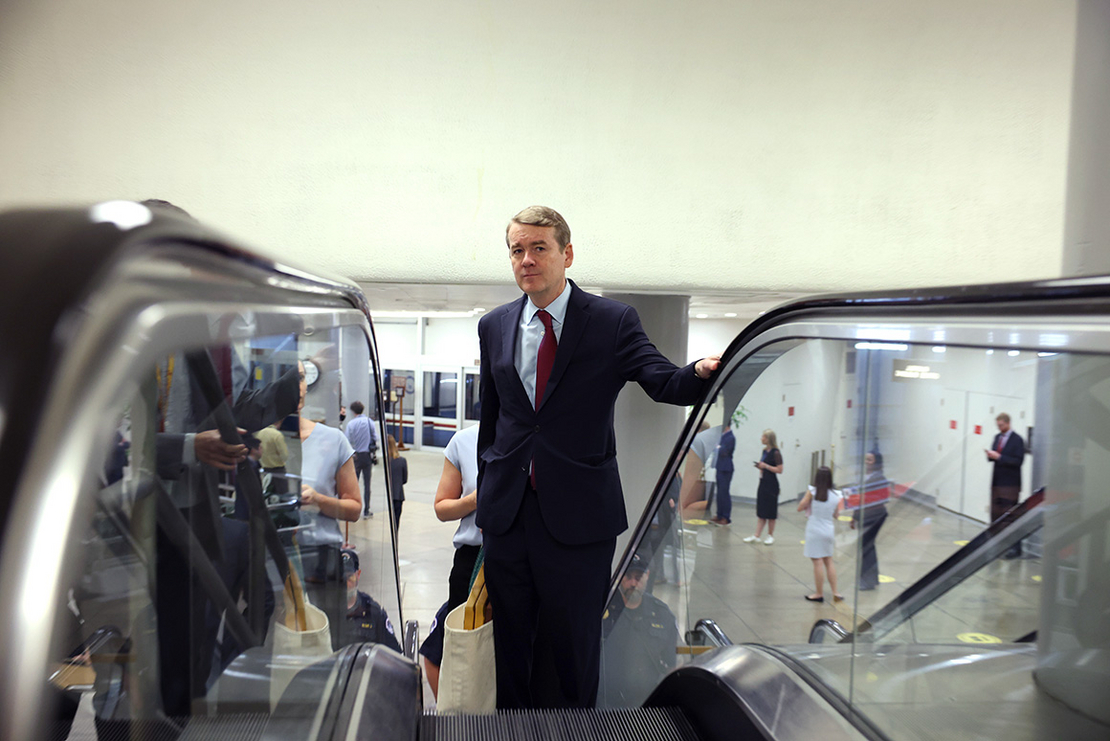 Colorado is shedding its purple state label, and Democratic Sen. Michael Bennet is likely to reap the rewards in next year’s election.

Though Election Day is more than 15 months away, Bennet has no major opponent. Top forecasters don’t even consider the race competitive, in a shift from other recent statewide contests.

In 2010, Bennet defeated Republican Ken Buck in one of the country’s most expensive races. He went on to run the Democratic Senatorial Campaign Committee between 2013 and 2015. He won again in 2016. And now he appears poised to win without having to moderate positions on energy and the environment.

“If there were 10 competitive Senate races, this would be 10, at the bottom of the list. And nothing would change that as of today,” said Floyd Ciruli, a longtime Colorado pollster.

“Bennet has raised significant money. There is no particular boiling scandal. And we’re picking up a congressional seat, so that’s carrying a lot of the attention in the state,” he continued, referring to the new House seat Colorado is getting in the next election thanks to the latest U.S. Census count.

Ciruli said Bennet has had issues with an enthusiasm gap in the past, noting that his failed 2020 presidential campaign generated little excitement. “I don’t think Bennet is a jump-up-and-down-with-enthusiasm candidate,” Ciruli said. “On the other hand, he’s a solid senator in a state that, as far as I can tell, still leans highly Democratic.”

Bennet told E&E News in a brief interview that he isn’t resting on his laurels. “We’re working really hard and taking nothing for granted,” he said.

Bennet’s campaign raised $1.7 million in the second quarter of this year and had $2.3 million on hand, according to Federal Election Commission records. He has pledged not to take any donations from corporate political action committees or federal lobbyists — the only incumbent senator to make that promise in the 2022 election cycle.

Bennet serves in the Senate with another Democrat, John Hickenlooper, and the two have a history together. Hickenlooper, as mayor of Denver, had Bennet as his chief of staff.

Now Bennet is Colorado’s senior senator, having survived the political upheavals of the Trump and Obama eras when politicians like former Colorado Democratic Sen. Mark Udall were unseated.

The legislation has become somewhat of a litmus test for conservation credentials in Colorado. Then-Sen. Cory Gardner (R) faced significant criticism last year for not supporting the measure and ultimately lost his reelection by 9 points to Hickenlooper.

Bennet currently chairs the Senate Agriculture Committee’s Subcommittee on Conservation, Climate, Forestry and Natural Resources, which he sees as an essential position to push his environmental agenda (E&E Daily, May 18).

The League of Conservation Voters Action Fund and its affiliate Conservation Colorado backed Bennet’s reelection campaign last month. “Sen. Bennet has been a champ on climate and conservation. We endorsed him because of that leadership,” said Kelly Nordini, Conservation Colorado’s executive director. “And his leadership on those issues should be no surprise, because that’s where Colorado voters are. We saw that in the 2020 election.”

In the run-up to his 2016 campaign, which he won by 4 points, Bennet had a moderate stance on some issues that could affect the state. He joined moderate Democrats in seeking some changes to the Obama administration’s 2015 Clean Water Rule and expressed concern that EPA’s ground-level ozone regulation was too strict.

But in advance of the 2022 race, Bennet joined progressive lawmakers and activists at a Capitol Hill event last week to call for aggressive climate legislation, citing recent wildfires and floods in Colorado.

So far, no major opponents have come forward to challenge Bennet. Buck, now serving in the House, and Rep. Lauren Boebert (R) have both declined, as has former Gov. Bill Owens (R).

“I think what you’re seeing is Republicans looking at him and saying, ‘Gee, do I really want to take this on?'” said Rick Ridder, a Democratic consultant in the state. “At this time, there just doesn’t seem to be a strong Republican candidate emerging,” he said after running through some of the potential candidates.

“They’ll have a nominee, and it’ll be a contest. But that nominee is going to be burdened in a state where Donald Trump is an enigma,” said Ciruli of the former president, who remains the GOP’s kingmaker.

Still, Republicans have hope. Sen. Rick Scott (R-Fla.), who chairs the National Republican Senatorial Committee, said the party will have a strong candidate. He’s betting on Americans being dissatisfied with Democratic control of Washington.

“You look what’s happening around the country, and every week we’re getting more and more candidates, because people are seeing the Biden administration and it’s pretty negative. People are opposed to it,” he said. “We’re going to have strong candidates actually all across the country.”

Bennet doesn’t yet have a primary opponent. But former state lawmaker and progressive Joe Salazar has expressed some interest, and state Rep. Emily Sirota is considered a potential contender.

The shifting demographics of the Centennial State are working in Bennet’s favor. While statewide candidates up until recently saw a purple state where they’d have to work to please both the conservative Western Slope and more liberal Front Range, it’s increasingly a more safely Democratic place.

“We got this new congressional district because we got 700,000 new people,” Ciruli said. “A very significant portion of them are young and well-educated. They came out here for the environment and recreation and the great mountains and what have you.”

The shift has been reflected in recent elections. While Bennet struggled with close margins by his 2010 and 2016 races and Gardner unseated Udall in 2014, Gov. Jared Polis (D) won by a comfortable margin in 2018 and President Biden beat President Trump by more than 13 points.

“We’ve had waves of new people in the past that were conservative, but that’s not this group,” Ciruli said. “This group is solidly liberal.”