Republicans flip the House; Pelosi to address her future 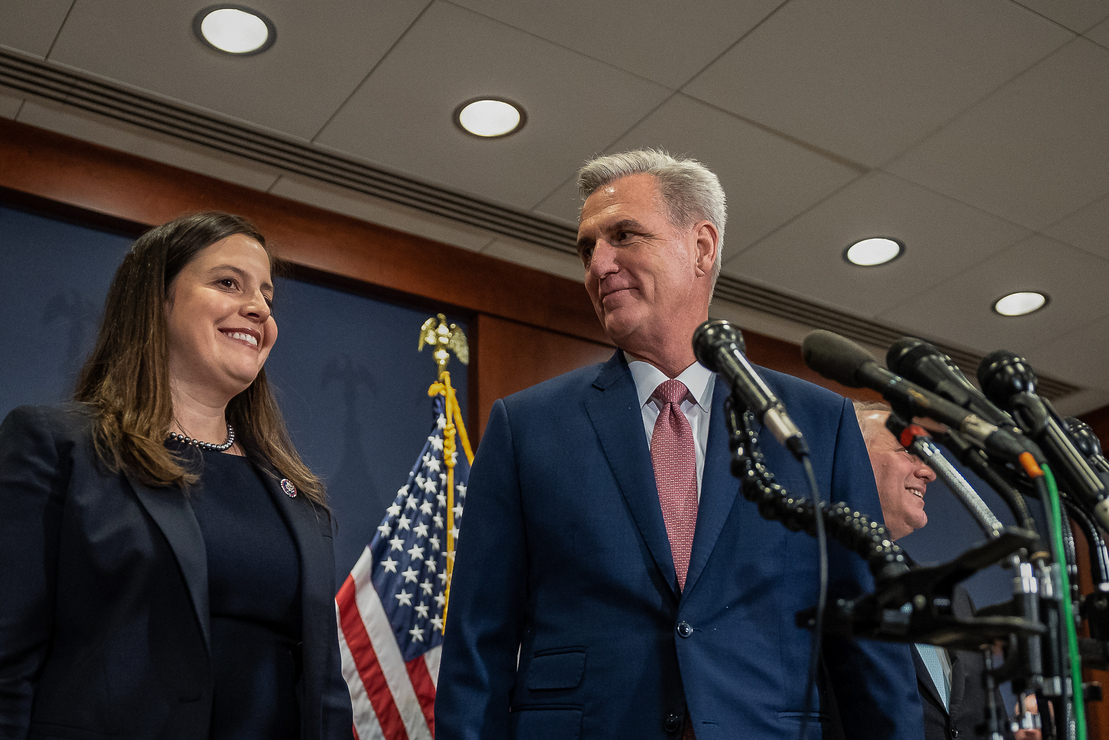 Republicans clinched the House majority Wednesday evening, though they’ll likely govern with one of the smallest margins in the chamber’s history.

The Associated Press and other major news outlets called Rep. Mike Garcia (R-Calif.) as the winner in his reelection bid against Democrat Christy Smith late Wednesday, after more than a week of counting following the midterm elections. That gave the GOP 218 House seats to the Democrats’ 209.

Republicans could get about 221 seats when all ballot counting is finished, while Democrats are favored to get 214.

That’s a much slimmer majority than Republicans were hoping for, based on historic midterm trends and other factors. McCarthy, who is slated to become the speaker, predicted last year that his party would gain as many 60 seats in the midterms. More recently, the GOP expected a margin of around 25 seats.

Despite the small margin, Republicans are taking their victory as a mandate and endorsement of their agenda to work to reverse and block President Joe Biden on matters like climate change and immigration.

“The era of one-party Democrat rule in Washington is over. Washington now has a check and balance. The American people now have a say in their government,” McCarthy told reporters Tuesday after the House GOP picked its leadership team, including nominating him to be the speaker.

“It was our ‘Commitment to America’ that we would create an economy that is strong, a nation that is safe, a future that is built on freedom and a government that is accountable. And that’s exactly what we’ll do,” he said, referring to the broad agenda outline House Republicans released in the final weeks of the election season, which included boosting fossil fuel use and production and rolling back environmental policies.

Biden, citing high costs, abortion and “preserving democracy,” said in a statement he was “ready to work with House Republicans to deliver results for working families.

“House Republicans delivered on our promise to fire Nancy Pelosi and serve as a check on Joe Biden’s disastrous agenda,” he said, referring to the House speaker from California. “In the process, we picked up seats for the second straight cycle and Republicans flipped the House for just the third time in 68 years.”

Pelosi, who is set to announce “her future plans” Thursday, according to a spokesman, downplayed the Republican win.

“House Democrats will continue to play a leading role in supporting President Biden’s agenda — with strong leverage over a scant Republican majority,” she said.

Senate Republicans had also hoped to take the majority, but Democrats over the weekend got to 50 seats and are staying in the majority. Some lawmakers and pundits are blaming former President Donald Trump for the GOP’s poor showing in the midterms.

“While we are disappointed that anti-environmental Republicans will hold a slim majority in the House in the next Congress, it’s clear that any attempts to weaken long-standing environmental and public health protections or recent climate progress would be at their peril,” Tiernan Sittenfeld, senior vice president of government affairs at the League of Conservation Voters, said in a statement.

“Voters overwhelmingly rejected many anti-democracy zealots and anti-climate action candidates in the pocket of Big Oil and instead turned out for far more champions who passed or supported the largest climate bill in U.S. history than any pundit or poll predicted,” she said.

“The extremely narrow incoming House Republican majority and their leadership team are completely out of touch with the vast majority of voters who support climate action and affordable clean energy.”

Garcia’s race was his third win against Smith, a former member of the state Assembly. He was first elected in 2020 to replace former Rep. Katie Hill (D-Calif.) after her resignation.

Results in some notable races remain too close to call.

In Colorado, Rep. Lauren Boebert (R) is ahead of Democrat Adam Frisch in ballots that have been counted so far, but the race is much closer than what was expected. If the candidates finish within 0.5 percentage points or less of each other, it would go to a recount under state law; as of Wednesday evening, they were 0.4 points apart.

Alaska Democratic Rep. Mary Peltola’s fate won’t be known until Nov. 23, but she is expected to win against Republicans Sarah Palin and Nich Begich III and Libertarian Chris Bye. On that date, state officials will announce the initial results and complete the ranked-choice voting process, eliminating the lowest finishers and reallocating their ballots until one candidate has a majority of the vote.

The remaining races are in California. Republicans Kevin Kiley and Rep. David Valadao are favored to win in their respective election bids. Democrats Adam Gray, Rep. Jimmy Gomez and Rep. Katie Porter are the expected winners in their races.