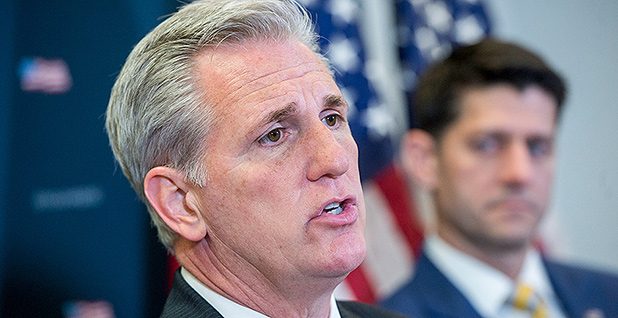 Facing political headwinds in this year’s midterm elections, Republicans have latched onto a bid to repeal California’s gas tax in hopes of boosting voter turnout — and their chances of holding onto a House majority.

Democrats must pick up 23 seats to take back the House, a seemingly daunting task. But with President Trump’s approval rating hovering around just 42 percent, some analysts have begun to think it’s possible.

To do that, Democrats will need to succeed in deep-blue California and particularly in seven Republican-held districts that Democratic nominee Hillary Clinton carried in the last presidential election.

The ballot measure targets 2017 legislation championed by Gov. Jerry Brown (D) that hiked California’s tax 12 cents per gallon on gas and 20 cents per gallon on diesel in order to raise $5.4 billion per year to pay for road and bridge repairs, as well as mass transit.

The effort is being funded in part by the state Republican Party and California’s Republican congressional delegation, including House Majority Leader Kevin McCarthy (R-Calif.), who could be the next speaker of the House if the GOP hangs on to its majority (E&E Daily, April 17).

The measure’s backers say they have the requisite signatures to qualify for the November ballot. And they expect it to help the GOP’s chances.

"It’s a huge wedge issue," said Carl DeMaio, a leading proponent of the measure. "And hells yes, I embrace the notion that this will punish politicians that decided to raise our taxes."

Critics, however, claim the effort is a thinly veiled attempt with national implications to boost Republican down-ballot candidates.

The gas tax repeal "is a cynical effort by the California Republican Party knowing that it doesn’t have top-tier candidates running for governor or Senate to hold onto the House," said R.L. Miller, chairman of the state Democratic Party’s environmental caucus.

Further, because of California’s primary system in which the top two vote getters in the June 5 primary advance to the general election, there is a possibility those top-of-the-ticket contests won’t feature a Republican in November.

All of which has given the gas tax repeal effort outsize importance for the GOP. McCarthy has given the group backing the measure, Give Voters a Voice, at least $200,000, according to campaign finance filings. The California Republican Party has chipped in more than $300,000.

Orange County Rep. Mimi Walters (R), one of Democrats’ top targets this year, has been a major proponent of the effort. She has contributed more than $100,000 and has raised more. Her campaign and congressional office did not return requests for comment.

The ballot initiative has given Republican candidates and operatives a shot of confidence in what is anticipated to be a difficult year.

"The gas tax is toxic for California Democrats," said Jack Pandol, a spokesman for the National Republican Congressional Committee. "Over and over, voters have shown they are furious about this regressive tax and are motivated to get to the polls to repeal it."

In addition to McCarthy and Walters, California Republican Reps. Ken Calvert and Devin Nunes have contributed $75,000 and $50,000, respectively. Rep. Doug LaMalfa (R-Calif.) has also given $2,500.

The anti-tax campaign hasn’t been without missteps, however.

Two Republican gubernatorial candidates, businessman John Cox and state Assemblyman Travis Allen, have both attempted to claim ownership of it.

Other proponents of the measure said that money would have been better used collecting signatures for the November ballot. DeMaio called Allen a "snake oil salesman."

There was also a contentious debate with California Secretary of State Alex Padilla (D) over how the measure should be worded on the ballot.

Cox, who was endorsed by Trump last week, has also claimed the mantle of the effort. He has given $125,000 to the Give Voters a Voice group and loaned it another $125,000, according to campaign finance filings.

The businessman is locked in a tight race with Democratic former Los Angeles Mayor Antonio Villaraigosa for second in the primary and advancement to the general election, according to recent polling. Current Lt. Gov. Gavin Newsom (D) is leading the gubernatorial field in polls.

Nevertheless, the Republican infighting over the measure will likely end after next month’s primary, when either Cox or Allen — or both — is eliminated from the gubernatorial race.

At that point, there is little question that the repeal effort complicates Democratic messaging going into the general election.

National Democrats this week have seized on rising gas prices, which are now averaging $2.92 per gallon — 52 cents higher than this time last year — as a political cudgel against Trump and Republicans (E&E Daily, May 23).

But that tactic would seem to cut against them in California when it comes to the gas tax repeal effort.

Jon Coupal, president of the Howard Jarvis Taxpayers Association, another major supporter of the effort, said the initiative boils down to a Brown tax pledge.

"This initiative, at its core, simply holds Jerry Brown to his word that there should not be tax increases without voter approval," he said.

At a transportation conference last week, he blasted it as a "political stunt" and characterized it as "devious, deceptive, unfair and un-Californian," according to media reports.

It remains to be seen how much Brown will campaign against the effort leading up to the November general election.

DeMaio said he expects the outgoing governor to be heavily involved and that $40 million will be spent on defeating the effort.

The pro-repeal effort currently has about $1 million on hand, he said, and he anticipates it will spend $10 million during the campaign.

Asked whether the effort was aimed at boosting GOP turnout, Coupal insisted it was motivated by fiscal conservatism. The measure is a constitutional amendment, so if it is passed, it would require voter approval of any future gas tax increase.

But he also acknowledged the potential side effects of the campaign.

"Will this motivate people? I hope so," he said. "But at the core of it this is about policy, not politics."

Carl Davis, research director at the left-leaning Institute on Taxation and Economic Policy, said the "overarching trend" in both blue and red states has been toward higher gas taxes.

He added that California should be "very wary" of the amendment provision in the ballot measure because it would also affect federal funding for infrastructure needs.

And Davis offered some advice for Brown and other opponents of the repeal effort.

"Folks need to understand what the gas tax dollars are going to be used for," he said, "and if the repeal happens, what projects won’t happen, what roads won’t be repaired, what bridges won’t be repaired. You have to get specific with people about where the money’s going to go or not if there’s a repeal."