Republicans ignore Trump as he undermines them on climate 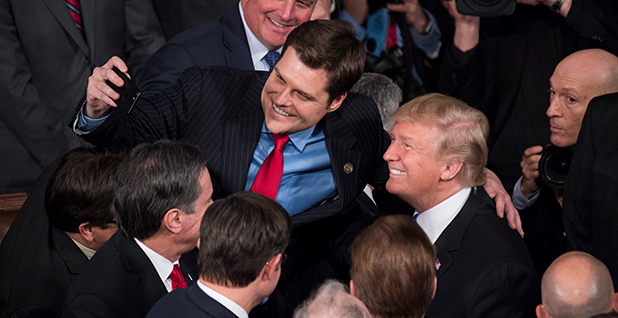 Rep. Matt Gaetz (R-Fla.) greeting President Trump during this year’s State of the Union address. While the president strongly questions the science behind climate change, Gaetz is pushing a resolution to rival the Green New Deal. Tom Williams/CQ Roll Call/Newscom

On Capitol Hill, conservatives are talking up energy innovation and carbon capture as solutions to climate change, even if some still deny the science that shows human greenhouse gas emissions are warming the planet.

But the White House has proposed a slash-and-burn approach to the Department of Energy’s research offices, while Trump continues to tweet out false and misleading statements about climate science.

He also mocked renewable energy at a rally in Ohio last week, suggesting people will have to turn off televisions when the wind doesn’t blow and claiming windmills cause "the value of your house go down by 65 percent" (Energywire, March 21).

While the changing climate orthodoxy in the GOP is belied by its leader, congressional Republicans say they want to stay in their lane, just as they have when the president has veered from their other beliefs.

"You’ve got some people like that," Rep. Fred Upton (R-Mich.), a senior member of the Energy and Commerce Committee, said of skeptics. "But that’s not where the majority of folks are, either here in the Congress, even I think among the Republican caucus. Maybe one day that was the case, but not now."

The Energy and Commerce panel, in particular, has housed a peaceful climate conversation during its first hearings on the issue under the Democratic House, an evolution that has surprised observers (E&E Daily, March 7).

Ranking member Greg Walden (R-Ore.) said that while the committee’s Republicans have "a good relationship with the administration," they’re trying to stay focused on "solutions and innovation" when it comes to climate change.

"I’m not focused on what other people are saying; I’m focused on finding solutions," Walden said. "I just work with my colleagues on the committee."

The dynamic between congressional Republicans and the administration is perhaps best illustrated by the Green Real Deal resolution to be introduced by Rep. Matt Gaetz (R-Fla.) as a counteroffer to the Democrat’s Green New Deal.

The resolution, first reported by Politico, would call for emissions reductions primarily through investments in carbon capture and nuclear and expanded tax incentives for energy efficiency.

It would also call for cutting down on National Environmental Policy Act permitting, especially for hydropower projects.

Gaetz has long professed to believe in climate science, but he is one of Trump’s greatest advocates on Capitol Hill, a known quantity on the evening airwaves of Fox News. He also once introduced a one-sentence bill to abolish EPA.

Some conservative clean energy advocates hope his relationship with the president lends credence to the Green Real Deal and Republican climate rhetoric generally.

"That Rep. Gaetz is driving this is important because he’s close with Trump and he is a strong supporter of Trump," said Charles Hernick, director of policy and advocacy at Citizens For Responsible Energy Solutions.

"What I hope the resolution would do is create space within the Republican Party to follow suit," he added.

On the Senate side, it’s Sen. Lamar Alexander (R-Tenn.), long a moderate on climate issues, who is attempting to make the GOP case.

He took to the floor yesterday to lay out a "New Manhattan Project for Clean Energy Independence," which would include doubling funding for clean energy research over current levels (see related story).

Trump’s budget request seeks to do the opposite, but Alexander suggested it wouldn’t make much difference in what Congress actually does.

"It’s important to have a Republican message on climate change that’s clear," he told reporters yesterday. "It’s clear why we’re opposed to the Green New Deal — it’s an assault on cars and cows and combustion. But it’s not as clear what we’re for, and this is what one Republican is for."

For conservative climate advocates, though, there’s a problem: How can you get more Republicans to join the conversation about climate change and carbon pricing when the party leader has stated his opposition?

In the near term, Trump has made the task more difficult, said Alex Flint, executive director of Alliance for Market Solutions, a conservative carbon tax group.

But Trump’s presidency has also given congressional Republicans a chance to separate themselves on a host of issues, Flint said, citing Trump’s tariffs on steel and aluminum, painful policies for some members of a party that was once vehemently free-trade.

"His ideas — on a number of issues — are so far removed from traditional conservative values that members know they have to come to their own conclusions," Flint said. "As a result, members’ experience with the impacts of climate change and voter expectations are driving member views."

Behind closed doors, Flint said, he’s met with more than 80 Republicans in the last year, nearly all of whom told him they believe the scientific consensus on climate change.

While there are still Republicans who take on a Trumpian tone on climate change, such as Rep. Paul Gosar (R-Ariz.), Flint and other conservative advocates say they’re a dying breed.

Still, it’s not clear yet how opinions in the Republican Party will evolve, said Anthony Leiserowitz, director of the Yale University Program on Climate Change Communication.

Partisans often take their ideological ideas from leaders, a phenomenon political scientists call "elite cues." Climate change belief among conservatives dropped off after Trump took office in 2017 but began to rebound the following year, according to polling from Yale and George Mason University.

That may suggest Trump’s unpopularity, combined with an increasingly prevalent climate debate, will eventually push Republicans to reject his climate views, Leiserowitz said.

But, he added, "my crystal ball is cloudy here and anybody who tells you otherwise is fooling themselves. Our politics right now is so chaotic that it’s hard to know what’s going to happen in the next two hours, much less the next two years."

For now, Republicans are hesitant to outwardly criticize Trump’s stances on climate, or a range of other issues, even when they disagree.

Most of them nominally oppose his tariffs or his overtures to extremists and conspiracy theorists, but they generally don’t speak out strongly or simply say that they don’t read the president’s tweets.

The case is sometimes the same with climate change, even if most say his budget is a starting point for negotiations, rather than a hard and fast request.

The tension between the administration and Capitol Hill on the issue draws skepticism from Democrats, particularly since some of Trump’s own agency heads have talked extensively about energy innovation, despite his proposals to zero out ARPA-E and cut the Office of Energy Efficiency and Renewable Energy.

That includes Energy Secretary Rick Perry, who last week touted a loan guarantee program that the White House slated for elimination in its budget (Energywire, March 25).

"It shows that using quote-unquote innovation as an excuse to do nothing is a terrible joke because innovation wouldn’t be enough, but they’re cutting all the agencies that do the exciting innovation — ARPA-E, EERE," Sen. Brian Schatz (D-Hawaii), an appropriator and prominent climate hawk, said earlier this month.

Still, the presidential budget process is, for the most part, a political game. When Upton worked at the Office of Management and Budget during the Reagan administration, it delivered copies of the budget in an ambulance.

"We made the point that it really wasn’t dead on arrival, and we had this fun stunt that we did," Upton said. "But there’s a number of things I disagree with."