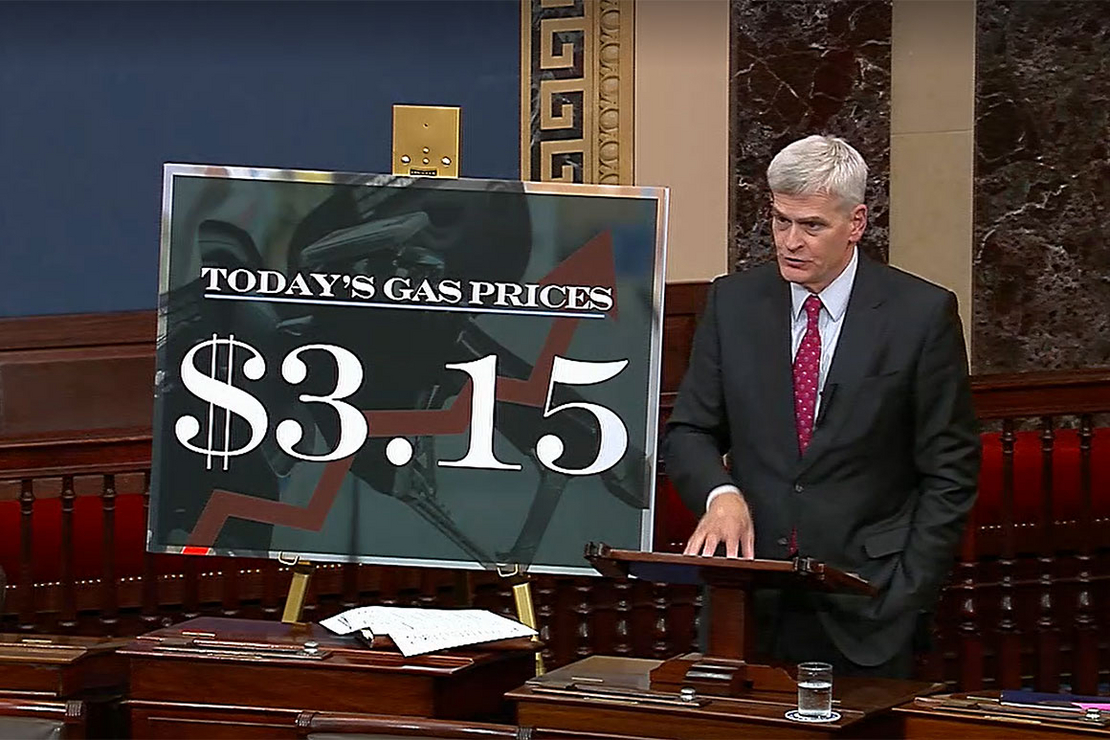 Republicans are doubling down on efforts to pin high gasoline prices on President Biden as fears of long-term higher prices across the economy gain steam.

Gas prices have been rising since November, spurred by factors including economic growth and increased demand as Americans go back to work and the COVID-19 pandemic wanes. Gas averaged $3.133 as of Monday, according to the Energy Department, up nearly $1 from a year prior.

Not long after Biden took office in January, the GOP started blaming him for the increases, citing his policies like blocking the Keystone XL pipeline project’s key permit and a moratorium on new oil and natural gas leases on federal land and offshore — policies that analysts say likely don’t have much of a short-term impact on prices.

The Labor Department’s announcement that the Consumer Price Index — the main measure of inflation — gained 5.4% last month, the most since 2008, is adding fuel to the fire. Republicans have argued that Biden’s economic stimulus policies went too far and are responsible for the inflation, and taken with the gas prices, are a double whammy caused by the president.

“Americans across the country, every time they fill up their tank feel these punches, and they are tired of it,” Sen. Bill Cassidy (R-La.) said in a floor speech yesterday on what he called Biden’s “hypocritical and backward energy policy that is putting a target on American workers.”

“It’s almost, if you will, a quadruple whammy: weakening U.S. security, increasing global greenhouse gas emissions, increasing gas prices and killing American jobs. That’s what this administration’s policies have been doing,” he continued.

The White House pushed back on the notion that Biden is to blame, and defended the president’s policies. A White House spokesman attributed the rise to factors like the usual summertime increase in gas prices and the economic bounce back from the depths of the pandemic.

“And prices are higher now than they were last year because Americans are finally able to travel safely again without fear of the virus, and because they have more money in their pockets and more confidence in the strength of the economy,” the spokesman said.

But in an interview yesterday, Sen. John Hoeven (R-N.D.) said the high prices for gas and other goods “absolutely” falls on Biden.

“We were leading the world in terms of domestic energy production, until the Biden administration came in and all these regulations, of course, restrict that supply of energy at the same time there’s more than demand,” he told E&E News.

Sen. John Barrasso (R-Wyo.) said the death of Keystone and the drilling moratorium are driving prices up and will continue to do so, along with Biden’s other “anti-fossil fuel policies.”

“Our Democratic colleagues believe in the religion of climate change, but they don’t really understand that we’re going to continue to be dependent, at least for a while, on fossil fuels,” he said. “People are going to need that if they can’t buy it from the United States, they’re going to have to buy it from the Russians and the Saudis, so their energy policies are making things worse.”

‘Money in their pockets’

While Biden has committed to fighting fossil fuels and transitioning the nation away from them, the White House is keenly aware of the economic and political fallout from high gas prices.

“The president understands how higher prices at the pump affect middle- and working class families,” the White House spokesman said, pointing also to Biden’s opposition to proposals to raise the federal gas tax.

Patrick De Haan, head of petroleum analysis at GasBuddy, said if Biden deserves any blame, it’s a minimal amount. Because of the complexities in the oil market and the time it takes for projects to get off the ground, Biden’s actions like the drilling moratorium won’t show up in prices for a while, De Haan said.

“This is the natural rebound of an economy that was crippled by COVID. It will probably be that way for at least six to 12 months, likely beyond that,” he said.

“At a point in the future, there will absolutely be a profound impact from Biden’s policies. But because of the slow nature of the way things work in the oil industry, that impact is potentially a year, two, even beyond that, down the road.”

If any Biden policy is to blame, the American Rescue Plan may have gone too far in helping the economy, and boosting demand, De Haan said.

“There are imbalances that COVID created that will likely last additional months, if not years, before the Biden policies have an impact,” he said of the energy actions.

The uptick in gas prices isn’t slowing down Democrats’ efforts to repeal a host of tax breaks for fossil fuel companies in the upcoming budget reconciliation package, efforts the industry says would likely increase prices.

Senate Finance Chairman Ron Wyden (D-Ore.) said yesterday that he intends to include a broad clean energy tax overhaul S. 1298 his panel advanced in May as “the linchpin to our climate strategy” in the reconciliation push.

That bill would repeal an assortment of fossil fuel tax breaks, including expensing of intangible drilling costs, the percentage depletion allowance, and credits for enhanced oil recovery and advanced coal projects.

Wyden told E&E News yesterday that he was unconcerned that rising gas prices would hamper the push to repeal the tax breaks, citing the recent heat wave that killed more than 100 people in Oregon.

“I think we all understand that in a global market, there are a lot of factors,” he said. “I’ll tell you, when I was home and we were watching, day after day, setting new records on heat, wildfires across the state, people said, ‘I’m glad you’re working on legislation that will set us on a very different course.’”

Despite Wyden’s optimism, ClearView Energy Partners LLC wrote in May that the bill’s repeal of fossil fuel breaks “could prove to be a heavy lift in a split Senate where [Sen. Joe Manchin (D-W.Va.)] wears the #50 jersey.”

While Wyden’s bill includes a revival of the 48C clean energy manufacturing tax credit favored by Manchin, Clearview said it doesn’t expect him to “support provisions with potential to discourage fossil energy development in West Virginia (or to be criticized by a potential GOP challenger as doing so).”

“For that reason, we reiterate that Democratic Party leaders may be willing to abandon many of the fossil energy rescissions to get the bill through the Senate on a party-line basis,” the analysts wrote.