Republicans love to talk about the ‘Green New Deal’ 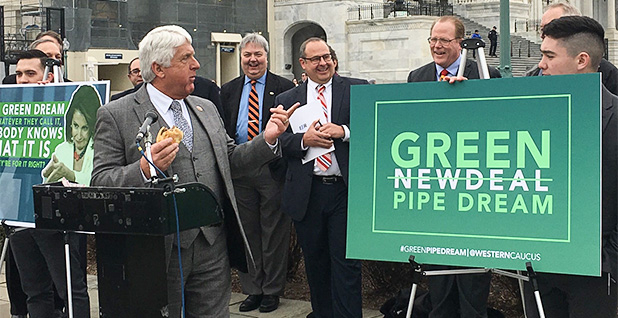 House Natural Resources Committee Republicans don’t think the "Green New Deal" falls in their jurisdiction, but they sure do talk a lot about it.

One thing’s for sure: The Western Caucus can’t draw a crowd like Ocasio-Cortez.

The event yesterday was sparsely attended by a handful of energy advocates, aides and reporters, unlike Ocasio-Cortez’s "Green New Deal" events, which have drawn dozens of activists.

Anthony Leiserowitz, director of the Yale Program on Climate Change Communication, said it’s probably too early to tell, but there are a few schools of thought on that front.

The Republican bludgeoning will in all likelihood drive down the poll numbers with GOP voters. Polling from Leiserowitz’s organization has early approval ratings for the "Green New Deal" higher than 80 percent, though the vast majority of respondents knew little about it.

"Here’s where there’s a bigger debate, and I don’t know the answer to this," Leiserowitz said. "Ultimately, does proposing the ‘Green New Deal’ provide a big club for conservative Republicans to beat Democrats over the head with? Or does it actually force this issue onto the national agenda, which clearly it has?"

‘You haven’t been taught about photosynthesis’

Messaging aside, Natural Resources Republicans, most of whom are Western Caucus members, don’t want to discuss climate change on the dais, nor are they especially interested in presenting their own vision for reducing the greenhouse gas emissions that cause climate change.

"Unfortunately, you haven’t been taught about photosynthesis," Gosar said to a young man, who did not appear to be a reporter but asked what Republicans are doing on climate change. "Photosynthesis is where plants take carbon dioxide to produce oxygen."

Instead of suggesting an idea to reduce emissions, Gosar touted the Trump administration’s "all of the above" energy agenda and noted that emissions have dropped on their own in recent years.

Rep. Louie Gohmert (R-Texas), a member of the committee and the caucus, went so far as to adjourn a Natural Resources subcommittee hearing on climate denial earlier this week because he didn’t think it was in the panel’s jurisdiction (E&E News PM, Feb. 26).

Most of the warnings laid out in the "Green New Deal” are echoed by the world’s top climate researchers and federal scientists.

The caucus invited, however, known quantities in the climate skeptic world, including David Legates, a climatology professor at the University of Delaware, and Myron Ebell, director of the Competitive Enterprise Institute’s Center for Energy and Environment.

"As the son of a geologist, our climate has always changed, and if you doubt me, go dig up some fossils," Gosar said. "It’ll tell you an awful lot about how our climate has changed."

But Gosar’s perspective, which evokes the staunch skepticism of Sen. Jim Inhofe (R-Okla.), is in some ways a dying breed.

Even those members have lashed out at the "Green New Deal," but Democrats have generally said they’re not concerned about giving Republicans an easy talking point. On the Senate side, they took the opportunity last night to launch into a series of floor speeches about climate policy.

"We’re going to get into the ‘Walking Dead’ situation before all this is over," Grijalva said, likening GOP predictions about the "Green New Deal" to the apocalyptic zombie landscape of the television show. "That’s going to be their whole thing, but I’m not going to let that deter what we need to do.

"You’ve got to read through the veil," he added. "It’s a stalling tactic. It’s avoidance."