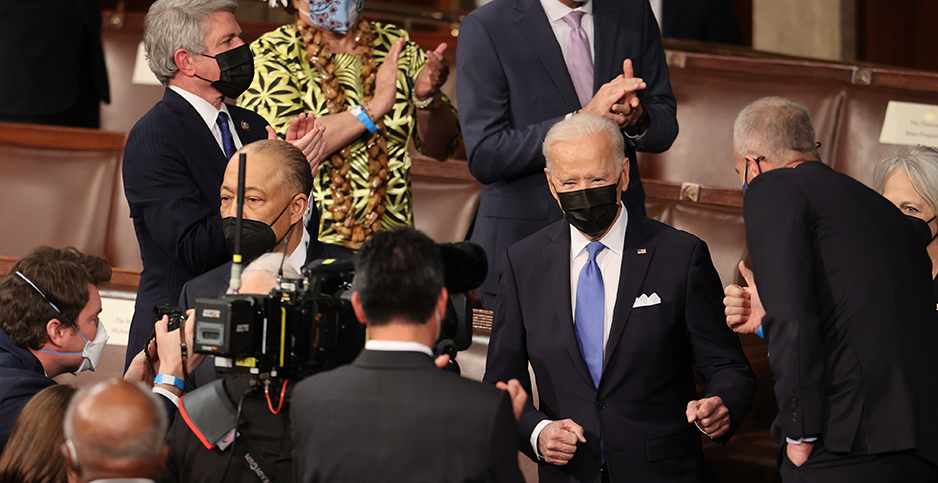 President Biden arriving at the House chamber last night for his speech before a joint session of Congress. Jonathan Ernst/UPI/Newscom

The president’s first speech to Congress struck familiar themes — jobs, green infrastructure and international engagement on climate — that resonated with progressive advocates and Democrats excited by the president’s unprecedented focus on climate at the outset of his term (see related story).

But Republicans stayed their line, offering muted applause, labeling Biden’s ideas "socialist" and attempting to peg him to the far left.

"When you think of infrastructure — roads, bridges, ports, airports, waterways, high-speed broadband. We’re in for all of that," Scott said. "Again, Democrats want a partisan wish list. They won’t even build bridges to build bridges."

Senate Republicans also spent much of the day yesterday spooling up an opposition campaign ahead of Biden’s speech, with several taking on the Senate floor to needle his trillions of dollars in federal spending proposals.

It reflected the larger dynamics during Biden’s first 100 days in office, with the GOP framing the president as extreme even as he brandishes a moderate image that appears to be sticking in polling and despite their own voters rioting at the Capitol building just a few months ago.

As several GOP lawmakers pointed out, however, Biden’s spending proposals go well beyond what other modern presidents have proposed, with his $2.2 trillion infrastructure plan and his call yesterday to inject another $1.8 trillion of spending for family aid into the economic recovery push.

"Our total federal budget that we vote on every year is $1.4 or $1.5 trillion," Sen. Mitt Romney (R-Utah) told reporters yesterday. "It’s a massive amount of spending, so I think maybe if he were younger, I’d say his dad needs to take away the credit card."

With Majority Leader Chuck Schumer (D-N.Y.) again raising the specter yesterday of using budget reconciliation to advance Biden’s agenda, Republicans said they had no doubts that Democrats would use the maneuver to move as much of the White House’s proposals — if they could keep their 50-member caucus unified.

"But again, I think that comes down to making sure that every single Democrat is willing to vote for huge tax increases and huge increases in government spending," he added. "I’m not sure that’s the case at the moment."

One such Democrat — Energy and Natural Resources Chair Joe Manchin (D-W.Va.) — expressed unease about the level of proposed spending.

"It’s a lot of money," Manchin told reporters ahead of the speech yesterday. "That makes you very uncomfortable. You want to find out how you’re going to pay for it. Are we going to be competitive and be able to pay for what we need in the country? And we’ve got to figure out what our needs are. And maybe make some adjustments. Who knows?"

Biden, for his part, said he welcomes overtures from Republicans, pointing to Oval Office meetings with members of both parties, but he also offered a warning.

"I welcome ideas," the president said. "But the rest of the world isn’t waiting for us. I just want to be clear: From my perspective, doing nothing is not an option."

Congressional Democrats, too, said after Biden’s speech they are willing to listen to Republicans but want to move forward quickly, one way or another.

"It comes down to brass tacks," Select Committee on the Climate Crisis Chair Kathy Castor (D-Fla.) told E&E News. "We’re going to be marking up legislation in committees over the coming weeks, and talk is cheap. Now it’s time to vote."

Some Democrats are weary of moving too slowly or reaching out to Republicans who may never be willing to compromise on a major spending package. And they see in Biden a president who is difficult to message against.

"I think what Biden is demonstrating is that this is a winner politically, and we can only hope that some Republicans are smart enough to recognize that," Huffman said in an interview.

Biden, Huffman added, is a "tough target" for Republicans. "When the best you can do is say that he looks old, or low energy, or something like that, you’re probably not winning," Huffman said.

Still, lawmakers from both parties said yesterday they’re holding out hope for bipartisanship on infrastructure and climate.

House Natural Resources Committee ranking member Bruce Westerman (R-Ark.), who was in the chamber for the speech and took notes throughout, conceded he was "impressed" by two admissions in Biden’s remarks.

But, Westerman added, "he doesn’t score any points with his actions not aligning with his realization. … It doesn’t align with the left’s policies to regulate carbon out of existence."

Asked whether he now saw at least some small opening to find common ground on environmental issues, Westerman said, "Sure, if they want to talk about real solutions that are really going to help the environment."

He mentioned his "Trillion Trees Act" as one such bill he’d be "open to discussing," but ultimately the administration’s actions "do not match their words."

Sen. John Cornyn (R-Texas), meanwhile, said he believes a bipartisan deal is possible on a traditional infrastructure package but dismissed the add-ons included in Biden’s plan.

"As long as we define what infrastructure is, and then a way to pay for it, which I think we can, then I think we’re in business," Cornyn told reporters. "But as long as they want to raise taxes on everybody and do a lot of unrelated spending, I don’t think that’s going to go anywhere."

Biden made clear last night he wants to define infrastructure to include a wide array of policies, including the electric grid and electric vehicles.

"Our grids are vulnerable to storms, hacks, catastrophic failures with tragic results, as we saw in Texas and elsewhere during the winter storms," Biden said. "The American Jobs Plan will create jobs that lay thousands of miles of transmission lines needed to build a resilient and fully clean grid."

But he’s is also facing pressure from the liberal wing of the party to go further. Sen. Brian Schatz (D-Hawaii) suggested the spending package could grow.

"I think the important thing to remember here is that the legislature writes the law," he told reporters ahead of Biden’s speech.

"Just as an example, when it came to the American Rescue Plan, the child tax credit wasn’t even in it at all. And it became a central component of it," he said. "So what the executive branch is doing is offering a framework and then we’re going to do our job."