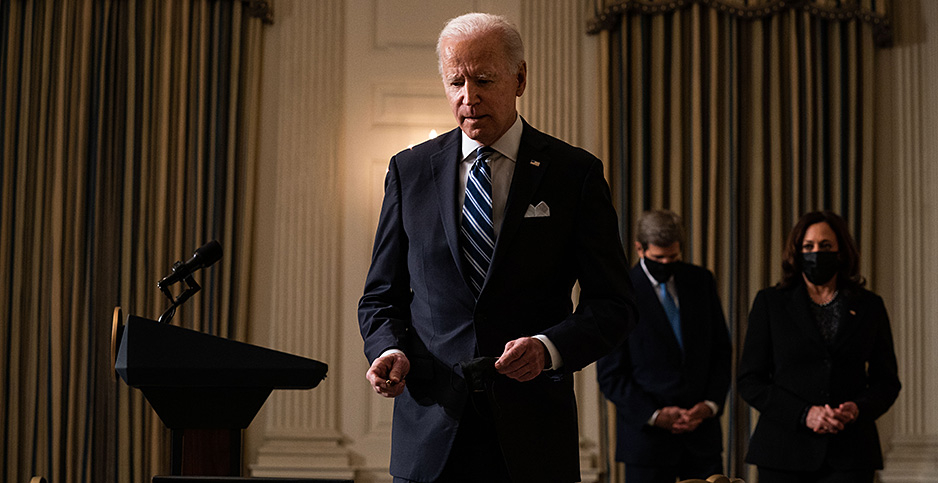 President Biden at the White House yesterday during an event on climate change. Anna Moneymaker/CNP/Polaris/Newscom

Biden’s orders — including policies to halt oil and natural gas leasing on federal land, transition the federal government’s vehicle fleet to electric, and conserve 30% of the nation’s land and waters by 2030 — met sharp opposition from the GOP, which argued Biden is giving gifts to foreign nations, being overly divisive and killing jobs.

But while they encouraged Biden to reconsider his actions, the Republicans, who are in the minority in both chambers of Congress, had few strategies to fight back through legislative means.

"On Inauguration Day, we heard President Biden rightly encourage the American people to strive toward unity. A week later, he is signing a divisive and illegal executive order that would damage Wyoming’s economy and the economies of other states like New Mexico, North Dakota and Louisiana," said Sen. John Barrasso of Wyoming, the top Republican on the Energy and Natural Resources Committee, whose state hosts extensive oil and gas production on federal land.

"If President Biden is serious about bringing our country together, he needs to understand that actions speak louder than words," Barrasso said.

"Threatening the livelihood of millions of hard-working families during a global pandemic is beyond destructive, and instead of caving to his radical base, President Biden should consider the devastating consequences that eliminating American energy will have on hard-working families and our national security," Scalise said.

She said, "At a time when millions are struggling due to the COVID-19 pandemic, the last thing Americans need is big government destroying jobs, while costing the economy billions of dollars. Embracing unilateral actions that impede our ability to compete globally will not address climate change risks and will only embolden China."

Sen. Cynthia Lummis (R-Wyo.) isn’t letting her place in the minority stop her from trying to push back against Biden’s actions.

She told reporters she plans to introduce a bill today, alongside 15 oil-friendly co-sponsors, that would bar the president from instilling a federal oil and gas leasing moratorium without approval from Congress. The moratoria prohibition would also cover coal, hard rock and critical minerals.

The "Protecting Our Wealth of Energy Resources Act" would also block agency heads at the departments of the Interior, Energy or Agriculture from acting in such a way that prohibits or significantly delays permitting or leasing in national forests and on federal land and the outer continental shelf.

Lummis said it was "unbelievable" that the Biden administration would act to close leasing during the pandemic and its associated economic downturn. During a call with reporters, the senator said she would urge the president to retract his executive actions.

A companion bill in the House to be released today has the support of GOP Rep. Yvette Herrell of New Mexico, Minority Leader Kevin McCarthy of California, Scalise and House Natural Resources Committee ranking member Bruce Westerman of Arkansas, according to Lummis’ office.

While Lummis noted Biden’s promise of local investment in energy communities, like Wyoming’s coal country, she also opposes direct investment of public monies to offset worker losses as part of the energy transition — a so-called just transition that worker advocates have called for.

"If they then want to subsidize those people who lost their jobs with public dollars, that exacerbates the mess we seem to be digging ourselves into in this country," Lummis said.

Sen. John Kennedy (R-La.) introduced legislation to stop Biden’s moratorium on offshore oil and gas lease sales. He was joined by eight colleagues on the bill, dubbed the "Conservation Funding Protection Act" because a portion of offshore production revenues go to conservation programs.

"President Biden’s war against Louisiana jobs and America’s energy independence is astonishingly dangerous," he said in a statement. "It’s short-sighted. It cuts against our conservation efforts because domestic energy production funds coastal protection."

The bills from Lummis and Kennedy face long odds. But since the GOP holds half of the seats in the Senate, lawmakers there may have a higher chance of pushing back against Biden’s agenda than their colleagues in the House do.

Republicans have also promised legislation to reverse Biden’s moves on the Keystone XL pipeline and the Paris climate agreement.

As Republicans railed against the executive orders yesterday, Democrats boasted that many of the legislative priorities they’d been fighting for were now being embraced at the highest levels.

One of the biggest policy achievements to come from the executive orders was the establishment of a Civilian Climate Corps Initiative, which will "mobilize the next great generation of conservation and resilience workers" by training participants to, among other things, "conserve and restore public lands and waters," "increase reforestation [and] carbon sequestration," and "improve access to recreation."

This climate corps program mirrors various pieces of legislation members of the House and Senate have introduced in previous Congresses, modeled after the New Deal-era program that put millions of young people back to work.

The concept gained prominence last year as a job creation opportunity in the midst of a severe economic downturn brought on by the COVID-19 pandemic.

There was serious talk over the summer of incorporating legislation into a pandemic relief package that would support a service corps program, including in the sphere of conservation — a proposal backed by Republicans as well as Democrats.

Republicans, however, left the praise to Democrats for the inclusion of an initiative many of them had fought for months earlier.

"In the height of the Great Depression, Franklin Delano Roosevelt understood well that out-of-work Americans were not without worth, but rather that they could leave an indelible mark on our country," said Sen. Martin Heinrich (D-N.M.). "We will be a stronger nation if we can provide a new generation of Americans with meaningful opportunities to serve their country and leave their mark."

Democrats praised Biden’s commitment to the so-called 30 by 30, or 30×30, initiative, which calls for conserving at least 30% of the nation’s lands and waters by the year 2030, by instructing the Interior and Agriculture secretaries to work with related agency heads to consult a wide array of constituencies to come up with reports on how to accomplish this goal.

"We don’t have any more time to waste," he said.

Sen. Joe Manchin (D-W.Va.), who chairs the ENR Committee and is a strong supporter of the coal industry, was more cautious about the orders, but nonetheless welcomed them.

"It is prudent to evaluate if taxpayers are receiving a fair return for the use of their resources. This executive order will not impact energy activity like drilling or permitting on existing leases," he said of the oil and gas leasing order.

He cheered Biden’s moves to revitalize coal-dependent communities and pushed for the president to take seriously the opportunities in energy innovation.

"Instead of elimination, we must instead focus on utilizing all of our resources in the cleanest way possible," said Manchin.

Who wins the politics?

While Republicans were harshly critical of Biden, they also see the orders as a big electoral benefit.

The National Republican Congressional Committee, which works to elect GOP candidates in the House, released statements criticizing key Democrats who are vulnerable in next year’s races for not speaking out against Biden’s energy agenda.

The group pointed to Democratic Reps. Matt Cartwright of Pennsylvania, Lizzie Fletcher of Texas and Abigail Spanberger of Virginia.

"Cartwright has chosen to side with his liberal party leaders over hardworking Pennsylvanians who rely on the oil and gas industry responsible for 117,000 PA jobs," NRCC spokeswoman Samantha Bullock said in a statement, reflecting similar comments targeted at other Democrats expected to have close races. "Don’t Cartwright’s constituents deserve a representative who looks out for them?"

NRCC said polling it commissioned in key battleground congressional districts shows voters are less likely to support a candidate who backs policies like the Paris Agreement, the Green New Deal, and stopping new oil and gas leasing on federal land.

"The bottom line is that voters aren’t going to tolerate job-killing anti-energy policies that will worsen any economic recovery," NRCC Polling Director Caitlin Reed said in a memo on the polling. The group did not release more details about the polling.

Fletcher, at least, appears to be aware of the politics at play. Yesterday, she and three other Texas Democrats – Reps. Marc Veasey, Henry Cueller and Vicente Gonzalez – wrote a letter to Biden asking him to reconsider his plans to institute the oil and gas lease freeze.

"A federal ban for any period of time will certainly imperil hundreds of thousands of jobs, entire communities, and billions of dollars in royalty revenues to the Federal Treasury and eliminate funding for important conservation programs such as the Land and Water Conservation Fund," they wrote.

The lawmakers did note, however, that they were pleased with Biden’s reentry into the Paris deal.

Fletcher, at least, appears to be aware of the politics at play. Yesterday, she and three other Texas Democrats — Reps. Marc Veasey, Henry Cuellar and Vicente Gonzalez — wrote a letter to Biden asking him to reconsider his plans to institute the oil and gas lease freeze.

"A federal ban for any period of time will certainly imperil hundreds of thousands of jobs, entire communities, and billions of dollars in royalty revenues to the Federal Treasury and eliminate funding for important conservation programs such as the Land and Water Conservation Fund," they wrote.

The lawmakers did note, however, that they were pleased with Biden’s reentry into the Paris climate accord.