Republicans say they want to make the agency great again 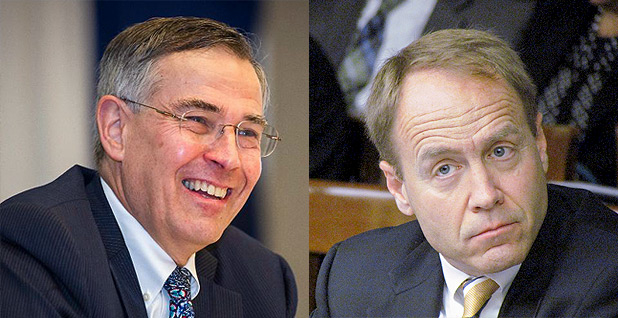 From left: Former Rep. Rush Holt (D-N.J.) and Bracewell attorney Jeff Holmstead are among those scheduled to testify about U.S. EPA at a House Science Committee hearing this week. Photos courtesy of @RushHolt/Twitter and ScienceDemocrats/Flickr.

The House Science, Space and Technology Committee will be back on familiar turf tomorrow as it takes another look at how U.S. EPA uses science in the process of crafting regulations. But the session will play out in a charged political environment that has changed dramatically since the panel last revisited the subject in June (E&E Daily, June 23, 2016).

The hearing, titled "Making EPA Great Again," is billed as an examination of the agency’s process "for evaluating and using science during its regulatory decision making activities," according to a committee summary. While a spokeswoman for Chairman Lamar Smith (R-Texas) said that no bill introduction is planned, critics suspect that he will use the hearing to lay the groundwork for reviving the "Secret Science Reform Act," a piece of legislation that could get a lift in the Trump administration (Climatewire, Feb. 1).

As introduced in the past, the measure would require EPA to base new regulations on "transparent or reproducible" science, with the underlying research data posted online.

"EPA has long been on a path of regulatory overreach, and the committee will use the tools necessary to put EPA back on track," Smith said in a news release last week putting the legislation atop the committee’s to-do list in the 115th Congress.

Detractors, however, view the measure as a Trojan horse aimed at undercutting EPA’s ability to issue needed regulations, both by opening the door to more legal challenges and because large-scale scientific studies may be difficult to reproduce.

The bill would "undermine" EPA’s ability to protect public health and potentially expose the government to "substantial litigation costs," the Obama administration said two years ago in threatening to veto H.R. 1030, the version of the bill introduced in the 114th Congress.

After passing the House, the measure died in the Senate. A similar fate befell H.R. 1029 the "EPA Science Advisory Board Reform Act," introduced by Rep. Frank Lucas (R-Okla.) and co-sponsored by Smith, that would have revamped membership requirements for a key agency advisory panel.

Of the four witnesses scheduled to appear tomorrow, at least two have questioned whether factors besides science shape agency decisionmaking. Jeff Holmstead, a former EPA air chief in the George W. Bush administration, has charged that the agency’s Mercury and Air Toxics Standards seemed geared more toward shutting down coal-fired power plants than regulating them effectively. Richard Belzer, a consultant, argued that EPA advisory committees "are susceptible to politicizing science," according to his prepared testimony for a House Science subcommittee hearing in 2011.

Other witnesses include a senior official with the American Chemistry Council, who could discuss science’s role in implementation of the Toxic Substances Control Act changes signed into law by President Obama last summer, and Rush Holt, a former Democratic congressman from New Jersey who now heads the American Association for the Advancement of Science.

Holt, who is testifying at the request of committee Democrats, will also be ready to address questions about "protecting science and scientific integrity" in the Trump administration, according to Kristin Kopshever, a spokeswoman for committee ranking member Eddie Bernice Johnson (D-Texas).

The new administration’s attitude toward climate science has been a particular concern after transition team officials last month sought the names of any Energy Department employees who had attended climate-related meetings. The officials backed off once their inquiry became public; Rick Perry, the former Texas governor now poised to lead the agency, later disavowed the effort during a Senate confirmation hearing (Greenwire, Jan. 19).