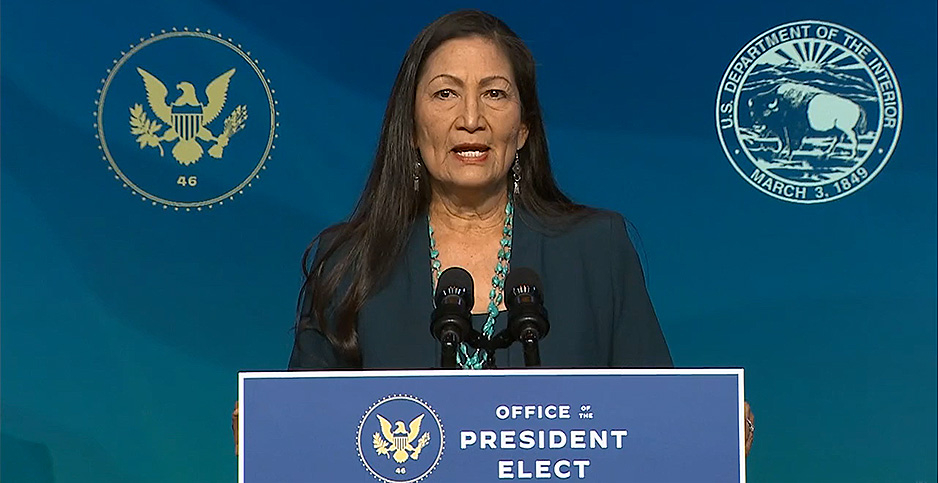 President-elect Joe Biden formally introduced his picks for the top energy, environment and climate change jobs, though Republicans hinted at a coming fight over their confirmations.

During an event Saturday, Biden said the team is "brilliant … qualified, tested, and they are barrier-busting."

"Folks, we’re in a crisis," the former vice president said in his speech in Wilmington, Del., which has become the hub of his presidential transition efforts.

"Just like we need to be a unified nation in response to COVID-19, we need a unified national response to climate change," he added. "We need to meet the moment with the urgency it demands as you would during national emergency. And from this crisis — from these crises, I should say — we need to seize the opportunity to build back and build back better than we were before. That’s what this administration is going to do with the help of these fine people."

The team, which Biden’s transition announced Thursday, is:

Each nominee or appointee gave a short speech during the event, as did Vice President-elect Kamala Harris.

Haaland said, "As our country faces the impacts of climate change and environmental injustice, the Interior Department has a role to address these challenges, the president-elect’s goals, driven by justice and empowering communities who have shouldered the burdens of environmental negligence, and we will ensure that the decisions at Interior will once again be driven by science."

Regan said, "When President-elect Biden called out the plight of the fence-line communities during the campaign, he made it clear that we would no longer just deal with the issues up to the fence line of these facilities, but that we would actually see the people on the other side of those fence lines."

He added, "Together this team will ensure that environmental justice and human impacts are top of mind as we tackle these tough issues."

Biden had previously announced that former Secretary of State John Kerry would be his chief climate envoy.

Speaking the next day on ABC’s "This Week," Granholm emphasized the economic opportunities she sees in fighting climate change through the Energy Department’s programs.

"There’s going to be trillions of dollars spent globally on combating climate change by countries around the world. And so, for us as a nation, we have to decide, are we going to get in the game economically?" she said.

"We could be producing that material, those products, here in the United States and stamping them made in America and exporting them around the country," Granholm said. "We need to be the leader rather than passive bystanders."

Haaland, Granholm, Regan and Mallory will each require Senate confirmation, while the other picks would not.

If the Republicans win, the GOP would keep its Senate majority, with 52 seats. But if both Democrats win, the upper chamber would be tied 50-50 with Harris breaking ties, effectively giving the Democrats the majority.

Republicans are indicating they’ll do what they can to fight Biden’s energy and environment nominees.

"It looks like the Biden Cabinet would be the third term of the Obama administration. And that didn’t sit really well in Wyoming," Sen. John Barrasso (R-Wyo.), said on "Fox News Sunday," adding that nominees would "have to run the gantlet."

He currently chairs the Environment and Public Works Committee but next year will be the top Republican on the Energy and Natural Resources Committee, and the panel’s chairman if the GOP retains the majority. That panel will be responsible for considering Haaland and Granholm for confirmation.

"With regards to energy, Joe Biden has repeatedly said that he’s against a lot of exploration for energy, a lot of exporting of energy. So his nominee for the secretary of Energy has said this. She said, ‘We ought to be doing everything we possibly can to keep fossil fuel energy in the ground,’" said Barrasso, referring to a comment Granholm made in 2016.

"The impact of that on our economy, on jobs, it is — it cuts the throat of my state, our economy, the men and women who work there, the energy that America needs," he added. "It’s going to drive up costs significantly for American families. So you bet I’m going to ask tough questions."

Sen. Kevin Cramer (R-N.D.), who sits on Environment and Public Works, told Fox Business’ "Varney & Co." on Friday that there would be "a bit of a brawl" over nominees. His committee will oversee the nomination process for Regan and Mallory.

"When you look at Mr. Regan, the person that’s now been tapped to head up the EPA, this is a person who in North Carolina sued the Trump Waters of the U.S. rule. This is a guy who stopped a natural gas pipeline from delivering that wonderful fuel source to people over water issues, overstepping his legal boundaries," Cramer said.

Of Haaland, he said: "This is a person that’s all-in on the Green New Deal. I don’t have to tell very many North Dakotans what the negative ramifications of that would be. So we’re going to have to stand our ground and fight the fight."

Cramer said the GOP needs to win at least one of the Georgia races "to be the firewall," but even without that, he is confident that the numerous judges and justices the Senate confirmed during President Trump’s term would thwart Biden’s policies.

"We are in a better situation should we have to litigate against this administration," Cramer said.