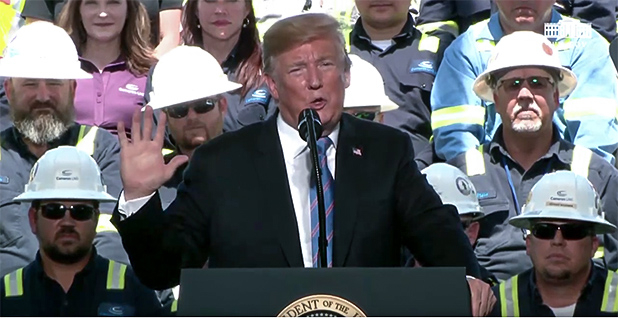 Congressional Republicans are reluctantly backing President Trump’s trade war with China, even as they acknowledge that two years of brinkmanship over tariffs threaten to take a toll on the administration’s energy dominance agenda.

GOP Senate leaders yesterday noted the negative effects of the standoff with China, which escalated Monday when Beijing announced a new round of retaliatory tariffs on an assortment of products. Among the retaliatory measures is an increase in the tariff on U.S. liquefied natural gas (LNG) from 10% to 25%.

But Republican senators also signaled they’ll defer to Trump’s negotiating prowess instead of trying to rein in the president’s tariff authority through legislation.

"Ultimately, nobody wins a trade war unless there is an agreement at the end, after which tariffs go away," Senate Majority Leader Mitch McConnell (R-Ky.) told reporters. "Hopefully, these tactics will lead us to that day. And if it does, I think it’ll be a winner for both sides."

American farmers have borne the brunt of Trump’s tough trade stances, but energy companies have been pulled into the fights, as well.

Trump touted growth in energy exports yesterday during a visit to an LNG export facility, in which he was accompanied by members of Louisiana’s congressional delegation. While the bulk of U.S. LNG exports has gone to Europe, ClearView Energy Partners noted this week that LNG exports to China slowed after Beijing imposed the 10% tariff in September.

Senate Environment and Public Works Chairman John Barrasso (R-Wyo.) said he’s hoping for a quick conclusion to the trade spat, which threatens exports of beef, coal and natural gas from his home state.

"Clearly, China has a long history of cheating and limiting their markets to us," he told E&E News. "So I think it’s important for the president to do what he has done in terms of the use of tariffs, but not as the end point but as a means to get the solution for the tariffs to go away at the end."

While Republicans are reluctant to cross Trump on tariffs, Rep. Lizzie Fletcher (D-Texas) took to Twitter yesterday to decry the impacts of the China fight on her Houston-area district, which is home to major oil and gas companies.

"This administration’s trade war with China is hurting businesses across the country — especially in Houston," she tweeted. "China is our fourth largest importer of liquefied natural gas, and its new tariffs put this critical industry at risk."

Securing long-term contracts in Asian markets has been a longtime goal of supporters of a proposed gas pipeline that would connect the North Slope to planned LNG export facilities across the state.

"We’ve been working hard to try to get these export applications through the process; we’ve made some pretty good headway, and you want to be able to have that market built," she told E&E News.

While Alaska has struggled for years to get the massive gas project underway, Murkowski said the administration’s tariffs on steel and aluminum would only add to construction costs.

"That doesn’t help, let me tell you," she said. "There’s been some back-of-the-envelope numbers out there that really cause a great deal of heartburn for a project like ours, when it’s a $50 [billion] to $60 billion project and you may see the price of steel go up as dramatically as they’re talking about. It’s tough to make it pencil out."

But Sen. Kevin Cramer (R-N.D.) said yesterday he asked representatives of an energy company he met with earlier in the day about tariffs, and that "it wasn’t hitting them just yet."

"They think that the previous tariffs have sort of been priced in," he told E&E News. "On the energy side, particularly in oil, as long as oil stays in the 60s, that’s probably more encouraging than tariffs are discouraging."

Trump’s stance on China may get some breathing room from long-standing bipartisan frustration with Chinese intellectual property theft and currency manipulation.

"I am not a tariff man. I don’t like tariffs because it’s action, reaction, always," said Sen. Richard Shelby (R-Ala.) yesterday. "But I do believe Trump is onto something in renegotiating trade agreements with people who have been eating our lunch. I think this is as good of a time as any, if you can choose, to talk to China candidly about trade."

Republicans have been cautious in confronting Trump on trade throughout his presidency, but Senate Finance Chairman Chuck Grassley (R-Iowa) said recently he is developing a bill to limit the president’s power to slap tariffs on products because of national security concerns, as the president has threatened to do on automobile imports (E&E Daily, March 28).

Sen. Lindsey Graham (R-S.C.), a close Trump ally, cited the threat of the auto tariffs to suggest that GOP deference to the president on trade is not limitless.

Sen. Debbie Stabenow (D-Mich.) said farmers and manufacturers in her state are already feeling the effects of Trump’s trade policies.

"We’re certainly seeing costs go up, raw materials, so on," she told E&E News yesterday. "I want to see us be tough on intellectual property rights with China and currency manipulation and so on. My concern is there’s no real strategy here. It is creating a situation where there’s a lot of unintended consequences."

Stabenow wasn’t optimistic that the economic pain would prompt Republicans to challenge Trump on trade through legislation.

"So far, it doesn’t matter," she said. "Russia meddling in our elections, or tariffs, they seem willing to be complicit with him on everything no matter how bad it is for their constituents."