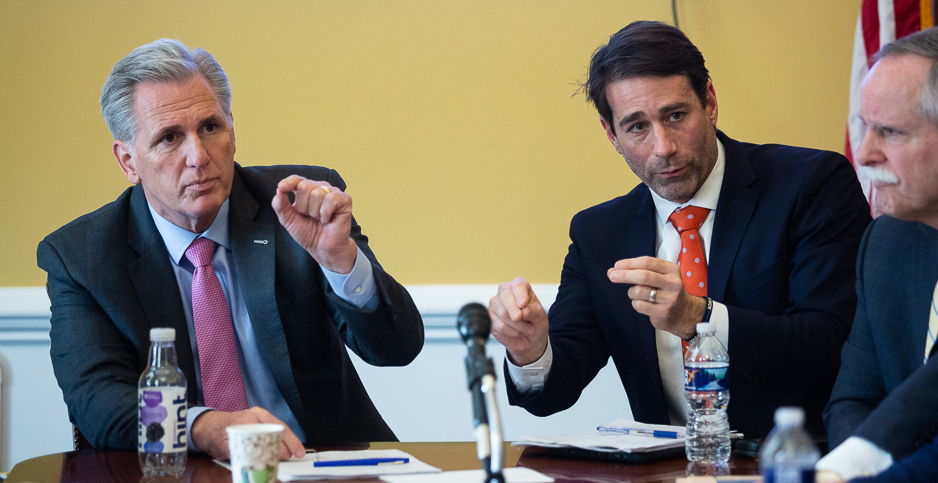 Top Republicans are taking heat from all sides after rolling out the first part of their legislative plan to reduce carbon emissions, demonstrating the kind of hiccups the GOP faces as it attempts to develop climate policy after years of silence coupled with science skepticism.

The reactions to these proposals show the sticky political spot that the Republicans are in as McCarthy and others attempt to craft a message in response to polls that show voters are concerned about man-made climate change.

In exit polls from both Iowa and New Hampshire after their recent presidential primary contests, climate change ranked as No. 2 in both states — only behind health care — as a top priority for voters.

The suggested GOP policies clearly do not envision an end to fossil fuel use anytime soon. While they’re generally bipartisan, they drew criticism from the left because Democrats, environmentalists and most climate policy experts say carbon capture and innovation alone come nowhere near addressing the scale of the climate change problem.

Meanwhile, the GOP has a constituency of conservative advocacy and electoral organizations that still opposes anything approaching climate policy.

Club for Growth Action blasted the bills, calling them "liberal environmental policies" and saying it would not endorse any candidate who supports McCarthy’s plan.

Other familiar names, including Myron Ebell of the Competitive Enterprise Institute and Tom Pyle of the American Energy Alliance, quickly piled on.

"Early in the year, I cautioned lawmakers that the only thing the Green New Deal could possibly hope to achieve is to lull policymakers into accepting less draconian ‘reasonable alternatives’ to it," Pyle said in a statement.

"Unfortunately, Republican Leader McCarthy did not heed that warning and has made the same mistake that many of his predecessors have made — you can never out-Democrat a Democrat," he said.

The Republicans involved politely shrugged off those criticisms. Energy and Commerce Committee ranking member Greg Walden (R-Ore.) noted that the 2018 extension of the 45Q tax credit for carbon capture was part of a Republican-backed budget deal.

One of the bills announced yesterday, a draft proposal from Reps. David Schweikert (R-Ariz.) and Brad Wenstrup (R-Ohio), would permanently extend the incentive and make a wider range of projects eligible.

"What we did is entirely consistent with conservative ideology," said Rep. Garret Graves (R-La.), ranking member of the Select Committee on the Climate Crisis.

"If folks are out there that are complaining about this, it’s because we’ve obviously failed to accurately communicate with them, so we’ll redouble our efforts to do so," Graves said.

There is also an evolving community of conservative advocacy organizations that support the lawmakers’ efforts. Groups such as ClearPath and Citizens for Responsible Energy Solutions helped birth the energy innovation agenda. They argue that it can help win back constituencies of women and suburbanites who went blue in the 2018 midterms.

"The one thing that unites us all as Americans is that we do want a cleaner, safer and healthier environment," McCarthy said yesterday, mirroring that message. "The good news is in America, the ingenuity that we’ve had, when we unshackle that we’re able to make that all happen."

But for McCarthy, there’s a longer game in play than just the next election cycle, Inglis said.

‘When has it ever worked?’

Still, Inglis and others said congressional Republicans will have to eventually go further to be taken seriously.

Plenty of Democrats, and even environmental groups, support planting trees and developing carbon capture and sequestration technology. But in general, they envision oil, gas and coal falling out of favor as the world moves to net-zero emissions by midcentury.

The idea would be to make clean energy cheaper with some combination of regulatory policy, price signals and tax incentives, and then export it around the world to help reduce global emissions.

McCarthy and his colleagues plan to announce other policies on clean energy and conservation in the next few months. But they still oppose new regulations or explicit prices on carbon, and they have not set targets for the kind of emissions reductions they want to see.

"Those who identify fossil fuels as the enemy have misidentified what the enemy is," Graves said. "It’s the emissions."

Graves argued that through the 45Q expansion and other carbon capture policies, "we’ve chosen to put a price on carbon by doing some incentives."

"The energy density of fossil fuels is 30 times greater than anything else," Graves said. "Why would you throw that out?"

Critics, however, said Republicans have not been particularly excited about incentives that would not help preserve the fossil fuel industry.

During tax-extender talks at the end of last year, for instance, congressional Republicans and the White House helped nix an expansion of the electric vehicle tax credit and extensions for certain clean energy credits.

Inglis was more optimistic about the message House Republicans were offering, but he cautioned against getting stuck in the innovation lane.

"We celebrate the climb to a base camp on this 10,000-foot mountain called worldwide climate action," he said. "It’s just that we don’t want to make a permanent encampment there."

Democrats aren’t likely to openly oppose most of the GOP initiatives floated yesterday.

Sen. Sheldon Whitehouse (D-R.I.), one of Capitol Hill’s most outspoken climate hawks, has backed 45Q and other carbon capture bills in the past. He said yesterday he doesn’t necessarily have an issue with the trillion trees bill from Rep. Bruce Westerman (R-Ark.).

"They’re trying to come up with a package that meets their political needs without any sincere effort to actually meet the technical, chemical, physical needs of dealing with the crisis that we face," Whitehouse said.