Republicans target Murkowski. Is she at risk? 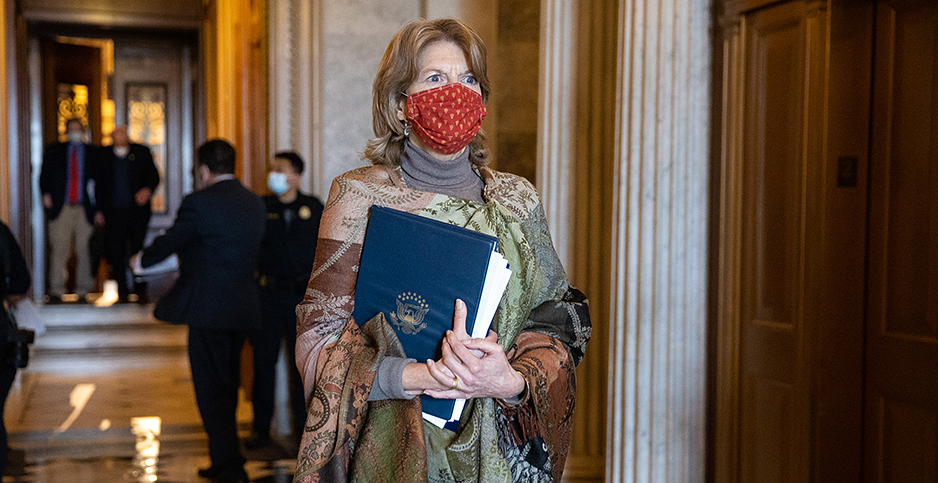 Alaska Republican Sen. Lisa Murkowski is facing a series of threats from within her own party in advance of next year’s election.

The senior member of the Senate Energy and Natural Resources Committee, who is also the top Republican Interior and EPA appropriator, has declined thus far to say if she’ll run for a fourth term in 2022.

Still, the Alaska Republican Party censured her this weekend, citing her votes to impeach former President Trump, her longtime support for abortion rights and her vote for Interior Secretary Deb Haaland, among other affronts.

"Senator Murkowski has repeatedly spoken critically of President Trump throughout his term in office, though many of the executive and legislative accomplishments of the Trump Administration have been supported by Senator Murkowski, and have benefitted all Alaskans," the state party wrote in its resolution.

The vote followed Trump’s charge earlier this month that Murkowski has been "disloyal." The former president, who still enjoys widespread support in the GOP, pledged to back an opponent.

"She represents her state badly and her country even worse," Trump, who has hinted at possibly running again in 2024, said in a statement. "I do not know where other people will be next year, but I know where I will be — in Alaska campaigning against a disloyal and very bad Senator."

It’s not the first potential election difficulty for the daughter of former Alaska governor and senator, Republican Frank Murkowski.

While she has been a staunch supporter of the oil and natural gas industry and orchestrated the provision in the Tax Cuts and Jobs Act of 2017 that opened the Arctic National Wildlife Refuge to oil and gas drilling, Murkowski has a significant moderate streak on issues like health care and abortion, and opposed Supreme Court Justice Brett Kavanaugh’s 2018 confirmation, voting "present" on the nomination.

Murkowski voted against a procedural move on Justice Amy Coney Barrett’s nomination last year, but then voted for Barrett’s confirmation.

Her initial opposition, on the grounds that Trump shouldn’t get to install a Supreme Court justice in an election year, spurred a primary threat from Sarah Palin, a former Republican vice presidential nominee and Alaska governor.

Murkowski lost a Republican primary in 2010 to the tea party-backed Joe Miller but went on to win in the general election with an unprecedented write-in campaign.

And next year’s race will have a new wrinkle that could help save Murkowski. Voters last year approved a new election system with open primaries where the top four finishers will advance to a ranked-choice general election.

That means primary voters, who notoriously represent the most passionate parts of the party, won’t be able to eliminate Murkowski from the race. And voters who rank her as their second or third choice could still contribute to her reelection.

Murkowski said yesterday that the censure came as no surprise to her. "I saw what had happened to my other Republican colleagues who had voted to impeach — they all saw censure motions or resolutions from their respective parties," she told E&E News. "Is it disappointing? Yes. But not altogether unexpected."

However, while not committing to a reelection run, she acknowledged that changes to Alaska election laws would help her prevent a repeat of 2010.

"What we have put in place is a system that would effectively remove the closed primary that the Republican Party had in place," she said. "It’s a jungle primary, or top four primary … so that certainly really should work to my advantage."

After the 2010 write-in, Murkowski stepped down from Senate GOP leadership but retained her position as the top Republican on the Energy and Natural Resources Committee until stepping down this year to comply with GOP caucus rules.

While the state’s electoral reforms are a boost to Murkowski, she said she isn’t taking potential challengers sitting down.

"You will have anybody who wants to file to run and put their name forward," she said. "It could be very interesting."

"I think she is left of most of the caucus on energy issues, with the exception of oil and gas in Alaska," he said. "The vote for Haaland was understandable but disappointing."

McKenna noted that in the 2016 election, when Murkowski and Trump were on the same ballot, her 44.4% finish was nearly 7 percentage points behind Trump’s.

"So there’s some risk there," he said of Murkowski. "Not a lot, but some."

Robert Dillon, a consultant and Murkowski’s former spokesperson on the Energy and Natural Resources Committee, acknowledged the risks but said he is more optimistic.

"The 2010 write-in demonstrates that there is always a threat, and Trump heightens the focus on that," he said. "But the new election rules open the primary system, so there’s not that partisan primary that hurts moderates who can attract a much broader electorate in an election."