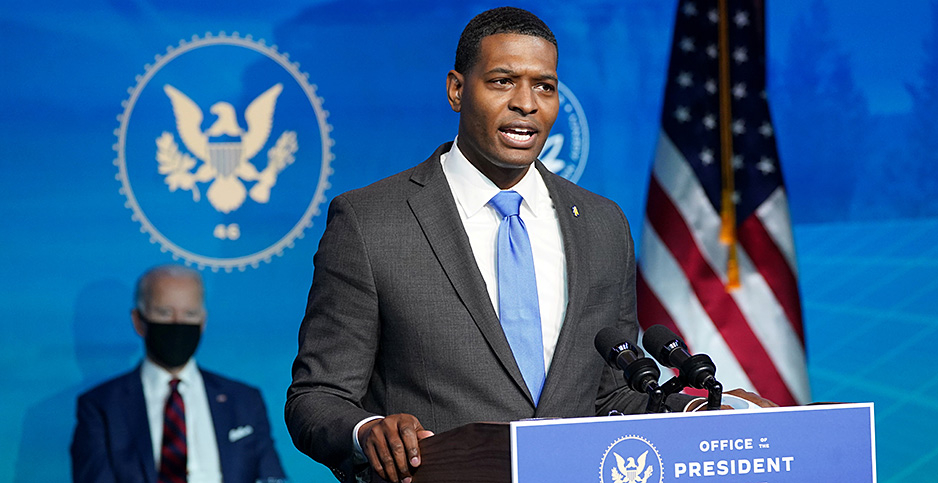 Regan, who is secretary of the North Carolina Department of Environmental Quality, is set to have his confirmation hearing before the Senate Environment and Public Works Committee this Wednesday.

He will be the first Biden administration nominee to be questioned by the panel, and they look eager to delve into the president’s plans on climate change and clean energy.

West Virginia Sen. Shelley Moore Capito, the committee’s top Republican, said in a statement shared with E&E News that the last Democratic administration, where Biden served as vice president, "crushed" with regulations the "economic foundation" of her state, known for its coal mining.

Now as president, Biden is already moving aggressively through a series of executive orders to deal with climate change, environmental justice and science, which will likely be the basis of many GOP questions for Regan.

"During Mr. Regan’s hearing on Wednesday, I plan to ask him pointed questions about the approach the Biden administration will take and where accountability rests for these policies."

Biden sees climate as a jobs issue too, but one where jobs can be created in responding to the challenge. His plan to have the United States running on carbon-free electricity by 2035 can create well-paying, union jobs in renewable energy, the president has argued.

At his confirmation hearing, Regan will be asked to put more flesh on those policies, especially those on climate and science where EPA will be at their center. He has been meeting with senators in preparation for his hearing.

Capito has talked to him twice. She has noted Regan’s state experience but has wondered who will be in charge of environmental policy, considering Gina McCarthy, a former EPA administrator, has returned to public service as head of Biden’s new White House Office of Domestic Climate Policy.

"I am concerned, and I raised this with him, having a czar in the White House: Is he really going to be making the decisions here? Or is he just going to take his marching orders from the White House?" Capito said in an interview with E&E News last week (E&E Daily, Jan. 29).

"Understandably, he was slightly vague but more, ‘Of course I’m going to be making the decisions,’ which is what I would say if I were him," she said.

Regan likely will also have to contend at his confirmation hearing with many of the thorny challenges that have tripped up his predecessors at EPA. Farm state senators in both parties serve on the EPW panel and often press the agency on the renewable fuel standard.

Sen. Joni Ernst (R-Iowa) held up some of President Trump’s EPA nominees over his administration’s handling of biofuel mandates. She pressed Regan on biofuels in her meeting with him, including the need to deny refiner waivers for oil companies and expand access to higher blends of biofuel, her office said.

Environmental justice — helping fence-line communities, often of color and impoverished, deal with the pollution from their industrial neighbors — could be a major topic for Regan’s hearing.

Regan, who would be the first Black man to lead EPA if confirmed, set up an environmental justice advisory board as North Carolina’s top environmental regulator and has spoken of his use of an inhaler as a child.

Sen. Tammy Duckworth (D-Ill.), another EPW Committee member, met with Regan last week. "Too many communities — especially low income and communities of color — face environmental and public health challenges at alarming rates while too many in power look the other way," said Duckworth in a statement

She added, "I look forward to working with [Regan] to help make sure that every American is able to breathe safe air, drink clean water and live on uncontaminated land, regardless of their zip code, the size of their wallet or the color of their skin."

Regan could draw on his own record at his hearing. A former career EPA employee and Environmental Defense Fund official, he has been involved in significant environmental challenges as secretary of North Carolina’s DEQ, including cleaning up coal ash ponds; mitigating PFAS contamination of drinking water; and weighing in on fossil fuel projects in the state.

Regan is also seen as someone who sought to restore the state agency after it had been attacked by the prior Republican administration in North Carolina. Democrats see a similar scenario at play with today’s EPA after Trump’s exit.

"Taking the helm of EPA would be a monumental task under the best of circumstances, but it’s hard to imagine a more difficult moment than right now. It will take a tremendous amount of hard work, vision and heart to rebuild this agency," said Sen. Tom Carper (D-Del.), the panel’s chairman, in a statement after meeting with Regan.

Carper also said, "The more I get to know Secretary Regan, the more confident I am that he is up to the task and ready to lead."