Republicans turn up heat on Haaland ahead of forum 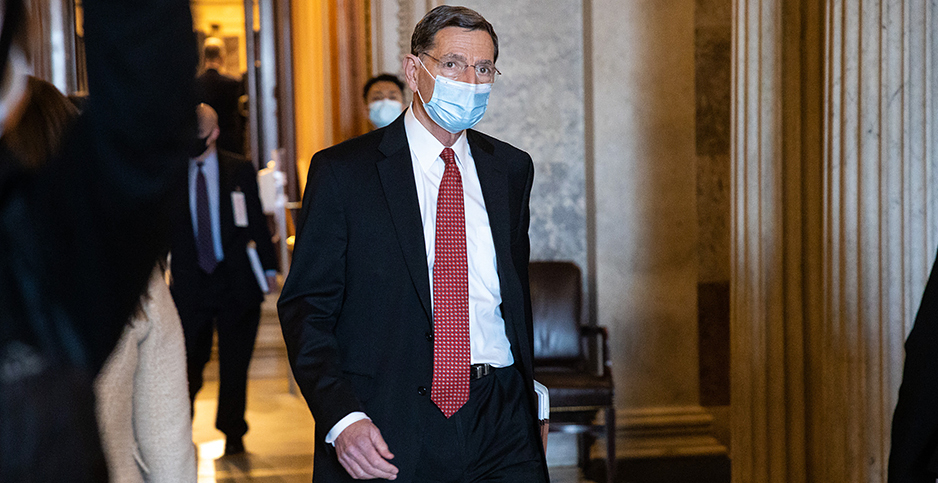 Lawmakers, oil drillers and conservation advocates are arming for battle over the future of the federal fossil fuel program ahead of a public forum about overhauling drilling later today.

The federal government controls access to millions of acres of public lands and minerals, including valuable crude oil and natural gas.

But President Biden has promised to reform the oil program as part of a pan-government approach to addressing climate change and placing the country on a path to net-zero greenhouse gas emissions by midcentury.

The virtual forum today will provide the Interior Department — which manages the federal mineral estate — feedback for a report the agency has promised to release later this year that may reveal the Biden administration’s specific policy changes for oil and gas development on public lands and waters.

GOP lawmakers supportive of the oil industry have promised to rein in the administration where they can, and they were earlier this week taking well-timed stances against the direction of Biden’s energy agenda ahead of today’s meeting.

Republican Sens. John Barrasso and Cynthia Lummis of Wyoming penned a letter this week demanding an explanation from new Interior Secretary Deb Haaland for how the forum and report will affect decisionmaking on public lands as defined by several federal laws.

The pair said Interior appeared to have "intentionally limited the right for the public to participate," noting that they were not invited to present and neither were state elected officials.

Barrasso, ranking member of the Senate Energy and Natural Resources Committee, and Lummis also took aim at Interior’s recent statements defending reform efforts that put oil and gas in the crosshairs for climate reforms, accusing the agency of overselling the ability to cut global emissions by restricting federal oil and gas development.

In addition, they chastised the president for the moratorium he has established on new oil and gas leasing that they say "threatens critical sources of funding for our states including funding for public education, roads and bridges, and conservation measures."

The Wyoming senators are not alone in their frustrations. Today, freshman Rep. Yvette Herrell of New Mexico, who has emerged as one of Congress’ most vocal Republican opponents of Biden’s energy agenda, will host colleagues in her district for a roundtable discussion on oil and gas production with "industry stakeholders," according to a press advisory.

Herrell will also participate in a press conference outside the Artesia Chamber of Commerce alongside GOP Reps. Pete Stauber of Minnesota, Claudia Tenney of New York and Ronny Jackson of Texas. Stauber is the ranking member of the House Natural Resources Subcommittee on Energy and Mineral Resources.

It’s not clear whether Herrell’s event was timed to coincide with the Interior public forum or is just a coincidence, but the media availability will likely serve as an opportunity for the lawmakers and their allies to weigh in.

Finally, Gulf state Republican congressmen this week introduced legislation, H.R. 2131, that would amend the Gulf of Mexico Energy and Security Act of 2006 to provide compensation to states with revenues that are reduced by the Biden leasing moratorium.

Supporters include Reps. Jerry Carl of Alabama; Troy Nehls and Randy Weber of Texas; Trent Kelly, Steven Palazzo and Michael Guest of Mississippi; and Garret Graves and Steve Scalise of Louisiana. Scalise is also the No. 2 House Republican in his capacity as the minority whip.

On the other side of the debate, Democratic lawmakers have released their own bevy of reform bills in recent weeks that would up royalty rates on federal lands and increase bonding required to drill, among several other changes. But civilian reform advocates have been assembling, too, ahead of the Interior forum.

And the Center for Western Priorities, the National Wildlife Federation, Public Land Solutions and Friends of the Earth have all released studies in recent days to underscore the need for modernization of the oil and gas program, and many have attempted to counter the oil and gas industry’s claim of economic harm from the leasing pause.

The Trump administration conducted a "fevered, fiscally irresponsible leasing binge" that left the U.S. "drowning in cheap oil," Dave Jenkins, from Conservatives for Responsible Stewardship, said in a call with reporters yesterday.

Autumn Hanna, vice president of Taxpayers for Common Sense, said during that call that while the Trump administration’s pro-oil practices highlighted issues with the status quo, the need for modernization also predated the so-called energy dominance era.

She argued that taxpayers are being underpaid for public resources and expressed support for the Biden administration’s leasing pause.

"The first thing you do when you find yourself in a hole is stop digging," she said. "Now is a perfect time to step back."

The Biden administration, which has stocked its Interior Department with several climate-conscious policy wonks and former public land advocates, appears to feel the same.

Laura Daniel Davis, deputy assistant secretary on land and minerals, has said modernizing the oil and gas program will put it on more sound "fiscal and climate footing."

She said when announcing the forum: "The federal oil and gas program is not serving the American public well. It’s time to take a close look at how to best manage our nation’s natural resources with current and future generations in mind."

Interior has reported that roughly 77% of the offshore oil and gas leases that industry currently holds are unused or undrilled.

At the same time, the federal agency says that industry holds more than 7,000 approved permits to drill new wells that are currently unused — onshore and offshore combined.

In this context, industry, too, is trying to control the public narrative about oil and gas reform. It argues that mineral-dependent communities, and states that receive significant portions of their revenue from mineral extraction, could be hard hit by restrictive oil and gas politics, pointing in particular to schools and local services in particular that currently depend on oil and gas money.

The Interior-sponsored forum today will be followed by an event hosted by the Gulf Economic Survival Team, an industry and pro-business group in Louisiana.

This event will highlight the stories of local businesses in the Gulf that say they would be affected by Biden’s oil policies.

"The oil and natural gas industry shares in the Biden administration’s goals for a better economy, cleaner environment and a commitment to progress toward climate goals," Lori LeBlanc, GEST executive director, said in a statement earlier this month. "The best way to manage our nation’s natural resources is to recognize that offshore energy development generates thousands of jobs and millions in funding for coastal restoration and hurricane protection projects throughout the Gulf Coast."