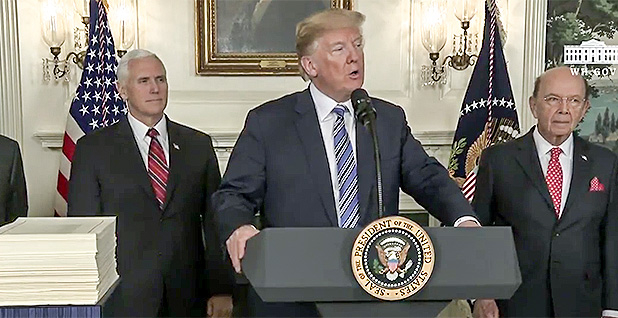 An emerging proposal by the White House and some House conservatives to potentially claw back billions of dollars in new federal agency spending is facing resistance within Republican ranks.

The Trump administration is drawing up potential cuts in domestic spending, known as rescissions, that could take money from the recently approved fiscal 2018 omnibus spending package.

That plan relies on a 1974 budget law that permits the president to propose rescissions and then gives Congress 45 days to approve them. Otherwise the spending remains.

President Trump nearly vetoed the recent spending accord, saying he felt forced to support billions of dollars for domestic programs to get an increase for Pentagon accounts. The emerging rescissions are seen as a way to reverse those increases the president and many conservatives opposed.

Details of where precisely the cuts would come from are unclear, but they have ranged from $10 billion to the entire $63 billion in increased domestic spending approved by Congress. Those increases helped raise Energy and Interior department spending and helped stave off deep cuts to EPA in fiscal 2018.

Several GOP senators signaled deep skepticism about the cuts, saying the move would in effect scrap a hard-won budget deal and doom the prospect of any future bipartisan spending agreements.

"If we reach agreement, we ought to honor it. That’s the way I always believed," said Senate Appropriations Chairman Richard Shelby (R-Ala.), who said he told Trump at a meeting last week that it would be difficult to move the proposal through his committee.

Shelby did not rule out some cuts, saying he had yet to see any specifics.

Senate Majority Whip John Cornyn (R-Texas) said he understands the conservative frustration over rising domestic spending levels but has doubts the package will advance in the Senate.

"Obviously, we ended up spending more money than many Republicans, including me, were happy with, but that was the price of getting the defense spending number at an acceptable level. I think it’s worth talking about, but the devil is going to be in the details," Cornyn said.

"Not a fan," said Sen. Lisa Murkowski (R-Alaska), head of the Senate Appropriations Interior-EPA spending panel, when asked by E&E News last week about the possible cuts. She added there is no reason to move ahead with rescissions for past bills if appropriators are able to move toward fiscal 2019 appropriations measures.

Senate Democrats are expected to be united in opposing the cuts, given their support for the recent spending deal. They control 49 seats, so it would only take two GOP opponents to block the rescissions.

Top Senate Democratic appropriator Patrick Leahy of Vermont dismissed the plan as "unconstitutional," adding it amounts to a line-item veto. "It won’t pass," he added.

The House is seen as more receptive to the plan being pushed by Majority Leader Kevin McCarthy (R-Calif.) as a way to appease conservatives unhappy with the recent budget deal.

Aides and lawmakers privately say McCarthy is eager to pass the rescissions to build credibility with conservatives ahead of his expected bid to replace outgoing Speaker Paul Ryan (R-Wis.).

House Republican appropriators, however, have been lining up against taking the money from the recently approved omnibus. "I don’t think you get much by being mean-spirited," said Rep. Tom Cole (R-Okla.), a senior appropriator.

Rep. Hal Rogers (R-Ky.), also a senior appropriator, said it would be hard to get lawmakers to vote against spending they recently approved. He said the better course would be to move ahead on the fiscal 2019 bills and find ways to rein in debt and deficits.

Rep. Mark Meadows (R-N.C.), a leader of the House Freedom Caucus that strongly backs a cuts package, said what is proposed will ultimately depend on whether there is a chance it can advance in the Senate. He suggested a rescission bill would stand no chance in that chamber if House leaders opt for a symbolic vote and try to cut the entire $63 billion increase in domestic spending.

"If we got some kind of assurance that they will work it very hard in the Senate, I think you will see a more precision-oriented recession package," said Meadows, who suggested a narrower proposal could seek between $10 billion and $20 billion in reductions.

Meadows said he has not seen specific details of the cuts and does not expect the package until May.

Some on Capitol Hill believe the easier political route might be for the administration to propose the cuts by eliminating emergency spending from earlier fiscal years that is no longer needed. Those rescissions would not impact domestic spending increases for fiscal 2018.

For example, the White House sought about $14 billion in rescissions last year to pay for emergency hurricane relief for Texas, Florida, Puerto Rico and the U.S. Virgin islands.

The proposed reductions included about $4 billion from the Energy Department’s Advanced Technology Vehicles Manufacturing Loan Program that the administration said has not been allocated in recent years after being approved in an Obama-era recovery package.

Congress, however, ignored those recession proposals.